Review: The Witcher 3: Blood and Wine

Behind great beauty lies a web of secrets and lies.

After finishing my months' long playthrough of The Witcher 3 and subsequently the Hearts of Stone. expansion, Blood and Wine was the only part of The Witcher 3: Wild Hunt Complete Edition I haven't yet taken a crack at. With The Witcher season 2 dropping on Netflix this very month I felt it was the perfect time to end my Witcher 3 journey with its biggest, and final, expansion. Videogame Geralt of Rivia's swan-song: Blood and Wine.
Let’s dive in.

In Blood and Wine, you once again play as the Witcher Geralt of Rivia, a human enhanced by magic and mutations to kill the monsters that roam the world. While in Velen Geralt meets up with two knights from the Duchy of Toussaint who have been tasked by Her Illustrious Grace Anna Henrietta to seek Geralt out. A beast has been terrorizing Toussaint's capital, Beauclair, claiming three former knights as its victims. When Geralt sets out to slay the beast he not only runs into an old friend but also a great conspiracy that threatens the bedrock of Toussaint.

The story of Blood and Wine is good. About the same level as Hearts of Stone in terms of quality though quite a bit longer, about 15 hours if you focus on just the main questline. It's a story that has deep roots in the books, the opening chapters of 'Lady of the Lake' specifically. Specifically, multiple characters from that part of the book appear here as major characters and a lot of Toussaint's unique aspects have their origins there as well.

A very neat detail for book lovers while newcomers can just appreciate these characters for how they are presented here, which is quite good. All characters have that Witcher trademark mix of both good and bad so they fall into a grey zone and, based on your own views and your choices in-game, their fates are decided.

The story is interesting, with neat twists & turns, good pacing and some neat diversions. I do think that the story has one big flaw: the big bad. There's more than one bad guy in Blood and Wine but the one that is posed as the big one from the outset and in marketing material is disappointingly shallow. The game doesn't spend a lot of time with him even though he is the catalyst for Geralt going to Toussaint. As a result, he's a shallow character.

This could be because of the path I took, but I honestly doubt it. There is one big fork in the road but it comes too far into the story to have any real impact on this aspect.

I do like Hearts of Stone better due to its atmosphere and the intriguing and more fleshed out villain but that's just a personal preference. Blood and Wine is a great story. Just as well written and engaging as you would expect from The Witcher 3 while providing a neat little bow to end Geralt's story on, even with its flaws.

Where in Hearts of Stone the story was the big attraction, that of Blood & Wine is the new map. Toussaint is around the same size as the (non-expanded) Velen and it's completely different from any other map in the game. Where the world in the base game resembles that of the dark ages and the Scandinavian isles Toussaint is based on Italy. From the architecture to the culture to the weather. It makes for quite a different look and feels which, after over 100 hours of playing the Witcher, was surprisingly welcome.

I do have a grip about Toussaint. Mainly, here on the Nintendo Switch, it doesn't run the greatest. Toussaint's graphics are noticeably less sharp has more pop-in and the draw distance of objects is lower than that of the base game. I'm no expert but I think that the more intense lighting effects, as well as the more vibrant colour scheme of the Toussaint, is what causes these problems. Not a deal-breaker by any means, if you play this on the Nintendo Switch you know the sacrifices you make, but it's disappointing regardless.

As it’s an expansion, the gameplay and other aspects are exactly the same as those of the base-game (which I’ll here forth will simply refer to as ‘The Wild Hunt’). To quickly recap the basics of the gameplay, Geralt has two swords on his back. Steel for humans, silver for monsters which you use to attack your enemies with either a light or heavy attack. His arsenal is supplemented with small acts of magic, signs, as well as special potions, bombs and oils.

What Blood and Wine add to Geralt's arsenal are a brand new set of mutations. Unlocked through a side-quest that is not easy to miss you can upgrade Geralt even further with super powerful new skills and abilities. How powerful? If I tell you that there is a mutation that revives you when you die then I think I've told you enough. You can only have one of these brand new mutations active at a time which is annoying at first but for the best when you start to think about balancing. Plus: these new mutations also unlock extra skill slots for the regular skills so even if you, somehow, don't find anything useful in the new mutations, you still get that as a neat little bonus.

Compared to Hearts of Stone, Blood and Wine is a much bigger expansion. The story is longer, you have a larger area added to the game and, of course, there are more side-quests. From the long, multi-parted variety to those that you just come across while roaming the world and you can complete in only a few minutes. Most importantly: there are actual new contracts here. There aren't as many as I would like but I'm still happy that we have new monster contracts to take on in Toussaint.

And you get your own house! The Corvo Bianco Vineyard is gifted to you by the Duchess at the beginning of the story and serves as your 'base of operations of sorts. If you invest enough coin in the property through the appropriate quest-line you can unlock tons of little bonuses. From exp buffs to extra charges for your potions and bombs. You can also use Corvo Bianco to display all of that awesome looking gear you've collected throughout the game. Neat.

Lastly, you don´t have to have played The Wild Hunt to play Blood and Wine. You can start it using an already existing save-file but there´s also an option to just start the expansion right off the bet. Geralt is levelled up to the appropriate and you’re giving some higher-end gear and items as well. You can even do most of the side-quests from The Wild Hunt this way so you’re not even restricted to just the Blood and Wine content. It’s the perfect option for players who might be returning to The Witcher from other consoles and just want to experience the expansion’s or if you’ve lost your progress over the years.

The Witcher 3: Blood and Wine is, once more, an excellent expansion. It brings an entirely new and quite different area to the table alongside a new story that ties up Geralt's videogame journey with a pretty neat bow. The blows to the graphical fidelity here on the Switch is and the lacklustre poster bad-guy are disappointments but by no means a detriment to the entire package.
Blood and Wine is well worth your time if you played and enjoyed the Witcher 3. 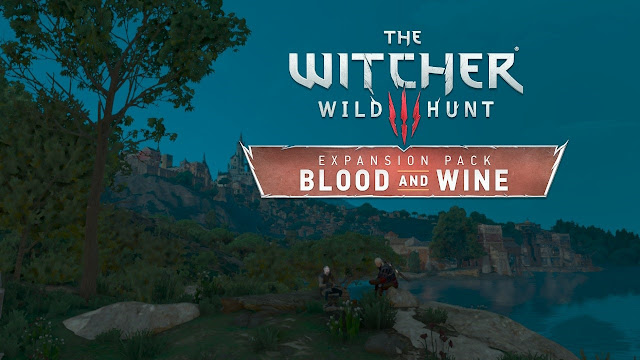