Let's Talk About the Breath of the Wild Sequel 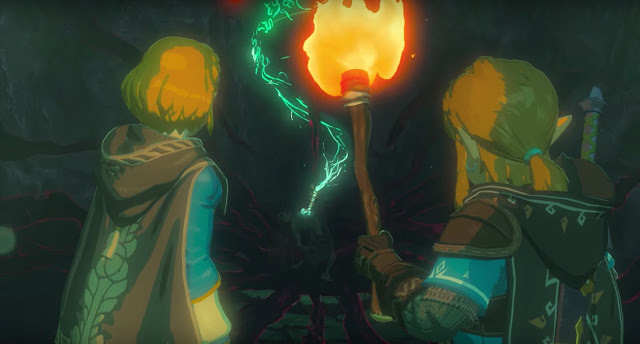 Nintendo is known for ending its Direct presentations with a 'one more thing'. One final reveal at the very end of the presentation that leaves us all wanting more. A Direct can be so lacklustre and disappointing, but that last final reveal can turn it all around and make it all worthwhile. Last year's E3 presentation was no different. The presentation was already pretty strong with two Super Smash Bros. Ultimate DCL fighter reveals and games like Luigi's Mansion 3, Link's Awakening, Fire Emblem Three Houses and the Witcher 3 getting ported to the system.

If Nintendo wouldn't have had that final end of presentation reveal E3 2019 would have gone down in history as a success, but that last reveal made it even better. We got a one-and-a-half minute trailer showing Zelda and Link going down some dark cave, a dark force destroying everything in its path and a mummified Ganondorf seemingly coming back to life. The trailer ended with one, simple phrase: 'The sequel to the Legend of Zelda: Breath of the Wild is now in development'.

We haven't heard much about the game since then. Nintendo would have without a doubt had something in store for us for the 2020 E3 regarding the game, but with E3 cancelled amidst the global pandemic that hasn't come to pass. Ever since its announcement, I've had some ideas about where the sequel could go, what kind of features it could/should have. I usually don't really engage in these types of discussion too heavily. Talking with others about upcoming games, speculating on what they might turn out to be is fun of course, but if you engaging in it too much you might run the risk of hyping the game up to such a level that you've only set yourself up for disappointment. Is for this reason that I'm steering away from such discussion and try to not get caught up in too many of them. That I tend to avoid discussions like those, doesn't mean I don't participate in them at all! I do have a few ideas about how the sequel to the bestselling Zelda game ever could turn out, or at the very least, things I want to see in it.

The first idea I have for the sequel is also the only idea I have that I think is something that the game absolutely needs. An actual, robust, crafting system. It's something that Breath of the Wild already had the foundations for but, for whatever reason, didn't build on. You can gather many different types of material in Breath of the Wild but aside from food you don't really have much use for those. When it comes to the ores you can really only sell them for rupees and not much else. I found this frustrating because a completely fine and cool use for these ores is right there.

In the description for the fire arrows, for example, they mention that tips are made out of Ruby, one of the ores you can find. It would make sense that you could actually use the rubies and wood you found to create your own fire arrows, but you can't. You can create ancient weapons by mixing basic weapons with the ancient parts you get from taking down guardians and you can use diamonds to repair the champion's weapons when they break but that's about it. It might not be present in the original, but it wouldn't take much to implement it in the sequel as the basis is already there.

It wouldn't just give these ores a purpose, but it could also help 'fix' one of the criticisms many people had with the game: the breaking weapons. I understand why this was implemented in the game, it fits the 'you make you ow adventure' aspect of the game and as the weapons you pick up over time break you're forced to keep experimenting and implementing all kinds of different strategies. What's frustrating about it is that the weapons break too easily and without warning. One way to fix this is, of course, readjust the durability of each weapon and make it clear how much more hits they can take but if they and/or implement a weapons crafting system could offset this problem as well.

If you can just create new weapons or fix the old ones at your leisure, the breaking wouldn't be that much of a problem anymore. It wouldn't undercut underlying reason either, as long as you keep some restrictions in place. You'd be limited by the resources you have on hand for starters and if they make it so that you can only craft at certain locations (blacksmiths) I'd say that the feature would be well balanced.

The second of my ideas is that 'Breath of the Wild 2' should put a bigger focus on its story. Breath of the Wild is a truly open-world game. Once you're done with the tutorial section and have left the Great Plateau you can go anywhere and do anything you want. You can follow the direction the game nudges you in and go free the Divine Beasts or you can go straight to Hyrule Castle to try and beat Ganon if you want! This freedom is the big selling point of the game and together with the exploration is what makes it so unique. However, as a consequence of that, the story is rather lacklustre. Because you can go and take on the Divine Beasts in any order you'd like (which is the game's story engine mind you) they had to design these in such a way that the story wouldn't be impacted by the order in which you defeat them.

Because of this, and the minimalistic approach the game takes in general, the story is barebones and every Divine Beast quests follows the same basic structure. It's repetitive and doesn't offer too much in terms of variety or depth. You also have the lost memory side quest, but I feel that's doesn't offer up enough story either. With the sequel, I'd say that they should put more emphasis on the story even if this might hinder the freedom of the player.

Keep in mind, Eiji Aonuma has confirmed that the game started off as ideas for DLC but they had so many of them they decided to make it its own game instead. It not only reuses Breath of the Wilds assets but will reuse the entire basic map as well. Sure, they'll be plenty of differences to the world (which I'll get into a little bit further along) but generally speaking, I think that we'll have to expect that around 80-90% of Hyrule will be the same as it was.

This makes exploration less important and fulfilling then it was in the original and while they could combat this by reworking the world much more intensively or add many new locations I'd argue that they shouldn't. I think that instead of trying to recapture that same feeling of awe and wonder from exploration they should focus more on the story. We already got to experience the awes and wonders of exploring Hyrule in the first game, I don't think we need a repeat of that. Let that be the defining aspect of the first game, giving people still a reason to go back to that one, while 'flipping' the script for the sequel.

The reveal trailer already shows us that the game will have a darker and creepier tone than the original, ala Majora's Mask, and while Aonuma has stated that the game won't become that dark or creepy, it's tone will certainly already be very different from its predecessor.

My third, and last, point ties into my second point. With the sequel using the same map, I feel that the world should feel more alive, be more inhabited. The entire story of the original revolves around Link waking up 100 years after Calamity Ganon all but laid waste to Hyrule. The apocalypse has happened and large parts of Hyrule have been reduced to nothing more ruins. They're very few people and settlements still left and while this makes sense for the game, it also makes it feel somewhat empty. The developers did enough to fill the world with many secrets and collectables, like the Korok seeds, so there was always something to see or find.

With (again) the sequel utilizing the same map you wouldn't get that same sense of satisfaction form this I feel. New players will, returning players won't as they have already see (a lot of) it. We also don't know how long the game takes place after the first. It might be the very next day (doubtful, yet possible) or it might be a few years down the road. Whatever is the case, I'd find it unlikely that the inhabitants of Hyrule wouldn't have started to rebuild the world. They might not be very far along with it, I don't see Castle Town getting rebuild that quickly considering the damage done to it, but I think it won't be too far fetched to say that some settlements might have been rebuilt in between the two games. Locations like Lon Lon Ranch might be up and running again or some of the abandoned houses sprinkled throughout Hyrule might have people living in them again. The game could even go as far and show a progression throughout its story. That the farther along in the game you come the more and more people come back to Hyrule and the more settlements and structures are rebuild.

I also feel that the Dungeons fit in this same category. They were largely absent from Breath of the Wild, only Hyrule Castle could really fit the description of a traditional Dungeon (if you blink). Instead, the game had the Divine Beasts and the shrines which were fine but didn't quite scratch the dungeon itch for most fans. I don't think we'll see the Divine Beasts returning again and while I do hope that the shrines make a return I am wondering how they would do this. Are they going to reuse the shrines from the original? Will they change their locations? Who knows at this point. Whatever they choose though, I feel that the game should have proper Dungeons again.

Those are just some ideas I have for the Breath of the Wild sequel. I've seen more ideas pop up online, like a playable Zelda, but the ideas above are the ones I hope to see. The sequel is currently still being worked on, with no release date in sight, so we might have to wait quite a while still to see how it turns out, to see if any of these ideas actually make it in the game.