Revisiting where it all begin. 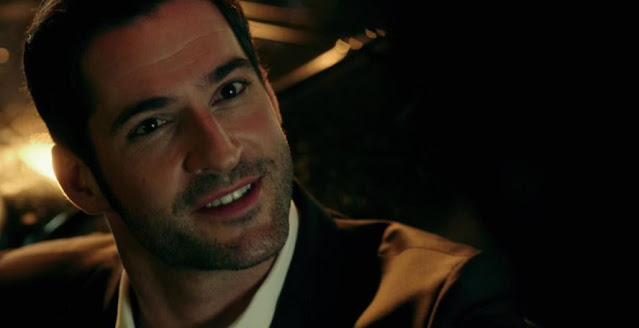 Welcome one and all, to the third entry in the Month of Lucifer! For the last two weeks, I've focused on Lucifer's origin in the Sandman graphic novels where this interpretation of the devil originated. I took a look at his very first appearance within the Sandman and followed that up with Lucifer's first solo series. With only one week to go before Season 5A drops on Netflix, I think it's time for me to make the jump the show itself. Let's keep to the theme I set with the other posts, Lucifer's first…, and take a look at the show's pilot episode.

Let's dive in, shall we?

Los Angeles 2016 AD. After ruling hell for thousands of years, Lucifer Morningstar (the devil himself) is tired of playing a part in God's play and has taken a vacation to earth 5 years ago. He now runs a successful nightclub named Lux and spends his day partying, granting 'favours' to humans and using is celestial powers to find out their deepest and darkest desires. After returning to his club his conversation with Maze, a demon who followed Lucifer from Hell to Earth is interrupted when time slows down marking the arrival of his brother Amenadiel. His brother informs him that his return to the Underworld has been requested and after a tense conversation leaves Lux. Blowing off some steam outside, Lucifer runs into the famous pop-singer, Delilah.

Delilah used to sing at his club and Lucifer granted her a favour and introduced her to some key people within the music industry and jumpstarting her career. Delilah has returned to Lux as her career has hit a low point, drugs and sex scandals for one. After a talk, Lucifer ins the favour Delilah owns her and asks her to turn her life around. While Delilah intends to do so, she sadly doesn't get the chance to. She's killed while walking home through a drive-by shooting. Lucifer is pissed at her death and decides to have a little chat with the dying shooter (who got hit by a bus while trying to escape the scene) who informs him that he only pulled the trigger. Later, he's questioned by the detective assigned to the case, Chloe Decker. Lucifer is unhappy with the way the cops are investigating the case and decides to find the killer himself. During his investigation, he runs into Detective Decker again and gets intrigued by her. She's immune to his powers and after getting her a lead, the two decide to team-up on the case.

There's also not a good grip on the characters yet, in both writing and acting. You can notice that they don't quite have a handle on the characters yet, they behave slightly different and have some different nuances. Most notably, Lucifer himself is a bit different. Tom Ellis accent is much thicker here and he's also much more of a dick. Dr Martin is also not much of a character here, to be honest. She more of a comedic presence, meant to illustrate Lucifer's effect on people when he uses his powers, but that's it. She has no character beyond her attempts at getting in bed with Lucifer.

Also a fun little tidbit about the pilot that you might not have known, but you might still have noticed. There exist two versions of the pilot. In the original one, which was used to market the show to the people over at Fox and later shown at San Diego comic-con, Dan is played by a different actor. Nicholas Gonzales (The Good Doctor) was originally cast as the character but was replaced by Kevin Alejandro starting from the 2nd episode and in the revised pilot. Remnants of this casting change can still be seen in the pilot episode. The scenes featuring Dan are filmed at a later date and inserted, which is made clear by the different shadows, overly blurry background and you not seeing him interact with the other characters at all in certain scenes. Trixie is also much closer in appearance to Nicholas Gonzales then Kevin Alejandro, clearly trying to make it clearer that she was his daughter as well. These things aren't all that big and don't really hurt the pilot episode, but they are obvious to fans.

When looking at the pilot with a bit more of a technical standpoint, I do have to say that I find the pilot isn't all that strong. It's meant to set the stage, show what the show is about and what makes it unique and it does this well but I do feel that episode is pretty standard for a pilot. It could have been a lot stronger, but the episode is rather basic. I feel like it went through the motions when it comes to making a pilot episode, introduce the characters like this then make them do this and then follow that plot event up with this etc.

Again, it's not bad persé and the episode is still good, but I notice these things and I thus talk about them and the pilot has a lot going for it as well. While the actors aren't quite familiar with their characters their performances are still great. Even if he has a much thicker accent and isn't as likeable seeing Lucifer interact and be Lucifer is still a treat and the production values are high overall as well.

The pilot episode of Lucifer is a good watch. It might not be as good as the rest of the show and might, in comparison, be a little stiff but that's not to say its bad. The production values are top-notch, the acting is good, seeing Lucifer do, well, anything is a lot of fun and while maybe nothing overly special by pilot standards it's still a good episode. It, naturally, a good place to start if you want to get into the series and fun to revisit if you're a fan already.