Nintendo just revealed a brand-new game in the Paper Mario series, so let's discuss it! 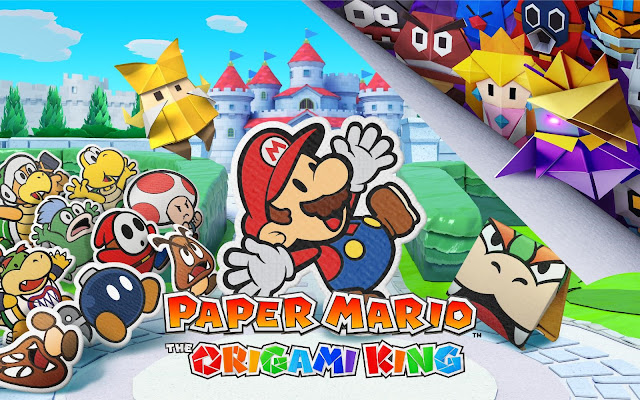 So yeah, not long after Nintendo's financial results and an investor briefing, where they mentioned they had a slew of unannounced games in the pipeline, Nintendo does what Nintendo does best by dropping something on us out of left-field. Even if it there had been rumours going around the internet for a month or two about a new Paper Mario game, which I talked about myself before, the announcement of a new Paper Mario game was a welcoming surprising nonetheless. Instead of including it in a Direct as most people expect Nintendo nowadays the game was revealed by dropping a trailer online together alongside a brief press announcement.

Paper Mario has not been the most well known or even successful of the Mario side-series, but it has definitely been one of the most unique. I learned about the Paper Mario series through one of my current favourite YouTubers, Arlo, and the series has been on my radar because of his work. The most recent games, Sticker Star and Color Splash don't look very appealing to me but the earlier games like The Thousand-Year Door with their more unique story and pronounced RPG elements do. The reveal trailer of The Origami King is an absolute delight that, to me, feels more like those earlier games from what I know about them and already gives me a good amount of things to talk about.

It starts off rather ominous, with a large and seemingly heavy door slowly opening to reveal an origami-style Princess Peach. She asks Mario if he will 'crease himself and be reborn'. After he answers with a 'No' she tells him that 'replies matter not' and opens a trap door under Mario's feet dropping him into darkness. This opening section alone is what hooked me. The entire sequence ominous, unnerving and seeing what appears to be a brainwashed and evil princess Peach is just so different from what I'm used to seeing in a Mario game. After this a quick sequence giving you some more story details is shown including Mario in a dungeon, what I assume is the titular Origami King revealing himself and Mario escaping the castle together with a folded Bowser.

The rest of the trailer is more of a highlight reel showing different parts of the game. Gameplay is spliced with what appear to be in-game cutscenes and story sections revealing some more details on how the game is build up. You get a look at Mario navigating different surroundings, like what appears to be a dessert at night and running away from a boulder made out of fumbled paper. You also get to see one of the mechanics the press announcement talks about: the ability to 'fold' your surroundings to solve puzzles and navigate your surroundings. That seems to me like a clever and fun mechanic and it ties into the whole 'origami' thing the game is clearly going for as well.

I quite like what I'm seeing. It appears to be a proper adventure, Mario going around the world gathering allies to help him take down the Origami King. The game also looks very unique, with its entire world being made up of paper ala. Yoshi's Crafted World. I'm not completely on board with this type of style, never had been from what I've seen from the other games, but moments like the castle being engulfed in paper makes it clear that the developers put a lot of time and effort in the graphics. When Mario was navigating through the dessert I was also reminded of Octopath Traveler. I was very dismissive on that games '2D-HD' art-style as well, but after playing the demo I fell in love with the game and realized I was judging it too soon and too harshly. I ended up loving the 2D-HD in the end, so maybe this paper art style will go the same way? Who knows, but I need to at least experience it myself before judging it.

There is something that I'm not so sure about: the combat. From what I've gathered from the last couple of Paper Mario games, the combat system was one of the main reason people disliked those games so much. I've only seen some videos about it, so I admittedly don't know much, but I've already spotted the 'jumping on enemies' trick from I believe it was Color Splash. I'm basically worried that many unwelcome elements from those games creep into this one, but only time will truly tell how much different, or how much the same, this game is going to be. The game also introduces "a new ring-based battle system that lets you flex your puzzle-solving skills to line up scattered enemies and maximize damage". This is shown off very briefly in the trailer and I don't really know what to think of it. It certainly looks like something that I've yet to experience, but I can't say if that's a good or bad thing. It might be fun, it might be overcomplicated and tedious and I definitely need it in more detail.

So to briefly summarize: I'm quite interested in Paper Mario: The Origami King. It looks different from what I'd expect from a Mario game and it, from what I can tell, being an RPG makes the game very compelling to me. I'm not yet sold on the graphics quite yet and I don't know how to think about the combat either. I'm intrigued either way and if I manage to clear away a little more of my backlog before July 17th or early August, and the reviews are good, I'll be sure to pick the game up and give it a go.