Into the looking glass. 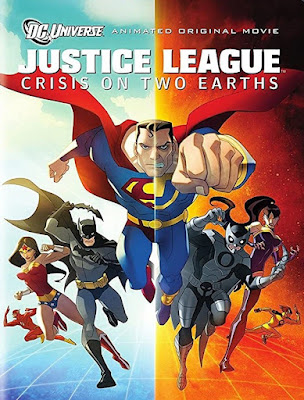 Where Marvel currently reigns supreme when it comes to live-action blockbusters movies, it's an entirely different story when it comes to animated features. For years now, DC has had a steady output of direct-to-video films which are, generally speaking, all very well received by critics and fans alike. I've been watching these animated films for years now. I'm a big fan of animation and superheroes so the two are a match made in heaven for me. Recently, I got the change to finally watch one of these DC animated movies that I had heard about and even seen some clips from pop up on Youtube, but that I had never seen in full. Justice League: Crisis on Two Earths, released all the way back in 2010.

Fun little behind the scenes production story for you: the movie was meant to connect the Justice League and Justice League Unlimited animated TV shows. It was put into development in 2004 by Bruce Timm under the name Justice League: Worlds Collide. One of the things that the movie would explain was how Wonder Woman got her invisible Jet which in the show just, kind off, appeared out of thin air. The project ultimately got scrapped and picked up again and rewritten a few years later by Dwayne McDuffie but with some parts of the original script, like the invisible jet, still intact.

So, with that fun little tidbit out of the way, let's start this review proper by giving you a quick summary of the movie's setup, as I usually do.

The film opens on what I'm going to refer to as 'earth II' for convenience sake, a parallel world where all the superheroes are evil, and all the supervillains are good, bar some exceptions. This worlds Lex Luthor, together with his friend the Jester (AKA good-guy Joker), infiltrate the HQ of the Crime Syndicate (the evil Justice League) to steal the Quantum Trigger, a device that gives of an immeasurable amount of energy. While Jester stays behind to cover Lex's escape and is sadly killed, Lex manages to escape and evade the Crime Syndicate by transporting himself to a parallel earth. The Justice League of this earth is in the midst of the construction of the Watchtower when they are alerted by the Metropolis Police that Lex Luthor is in their custody and requesting the League's audience. After confirming he's indeed from a parallel world and hearing his plea, how the Crime Syndicate is essentially ruling his world through fear and intimidation, the League except for Batman decide to help and head to earth II to take down the Syndicate.

Let's start off by talking about the animation first, as well, being an animated feature the quality of the animation is pretty important. The animation of the movie is very good, better than recent DC animated movies if you ask me. Not only does it just look pretty, the character design especially is top-notch, but the animation also is fluid, the background and effects are well done and the faces, their expressions and lip-syncing are all excellent. The voice work, on the whole, is excellent as well. There's no Kevin Conroy as Batman here or anything, but the voice actors fit there rolls well and do a very fine job, all brought there A-game as far as I can tell.

And then there are the fight sequences. There are a lot of fights in this movie, all very enjoyable and nicely choreographed, though perhaps there are a few too many of them. The movie is just over an hour long and I'd say about half that time is spent on fight scenes. This isn't a bad thing necessarily though, as said just a few sentences ago the fights are pretty amazing, the Batman vs. Owlman fight is a stand out the most in my mind, but dropping a fight sequence in favour of some more story/development might have been a better idea.

While the story is not bad at all, there are some side-plots or characters that don't get enough attention. There's a sub-plot here with Martian Manhunter and the daughter of the President of earth II, but there wasn't enough time to really develop the emotional bond between the two and the final scene between these two doesn't resonate as much as the film wanted it to as a result. The movie balances the main cast rather well but that doesn't mean there aren't characters that could have used more screen-time, both Green Lanterns, in particular, are simply just 'there'. A little more time to develop its romantic sub-plot and/or give the Green Lanterns more to do would have definitely benefited the movie, but what the movie has with them is just fine.

One of the fun things about this movie, especially for fans, is the earth II gimmick: seeing how the characters are different on this earth compared to how we know these characters. Some of the characters on earth II are pretty surprising in how different they are, but it's admittedly more of a fun novelty for the long-term fans than anything else.

The Crime Syndicate themselves, as characters, have much more attention given to them then I thought. We've seen the evil Justice League doppelgangers before, DC seems to have been doubling down on them in recent years with the Forever Evil event and Injustice games for example, but I feel that in most of those cases their character doesn't go further than just 'Evil'. Not here though, most members of the Crime Syndicate (the once that get sufficient screen-time at least) have a genuine personality to them which not only helps them be more fleshed out but helps them be better villains on the whole. This makes watching them, especially when they interact with each other like Owlman and Superwoman, for example, a lot more fun.

So to round off this review, Justice League: Crisis on Two Earths is an excellent movie. It is well animated, well voice acted fun romp of the Justice League taking on their evil reflections. If you want to watch a superhero movie with the DC characters, or if you're just looking for an animated movie to watch, I can wholeheartedly recommend this movie. The just ended DCAMU which started with Justice League: War might be easier to get your hands on these days, but I think this movie is worth that little bit of extra effort in finding it.