A new trailer about the final part of the Sword & Shield expansion pass, The Crown Tundra, has dropped online, here are my thoughts on it! 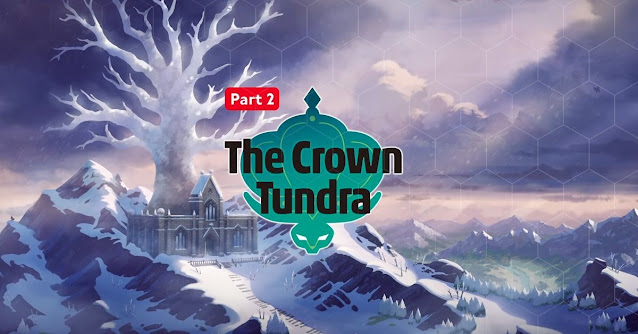 When on Monday the news hit that there would be some brand new information on The Crown Tundra the next they, my feelings were mixed. On the one hand, I was stocked that we would finally be getting some more tidbits after The Isle of Armor was released over 4 months ago. I was also a bit proud, I must admit, that the prediction I made regarding more news on the Expansion Pass earlier in the month came true. On the other hand, though the live stream would drop smack-dab in the middle of what was shaping up to be a very busy day for me and while I wanted to write a discussion about it all, I didn’t know if I would be able to do say. Within a reasonable timeframe at least. But, as you can read now, I managed to pull through in the end and managed to get this post to you within the day and I only had to abandon my Animal Crossing island for it!

Let’s not shake around the bush here any longer and dive right into things!

After a quick introduction by Tsunekazu Ishihara, the CEO of the Pokémon Company, we’re shown a new trailer showcasing The Crown Tundra with certain aspects of said trailer discussed right after the trailer ended. Before I get into that stuff though, I first want to focus on the full reveal of Galarian Slowking. Teased all the way back when the Expansion Pass was first announced back in January, we already had a good idea of how it looked. Plenty of fan-art had the Shellder on its head function as its eyes and that’s exactly what the final design does as well.

While I was rather disappointed by Galarian Slowbro when it was first revealed, Galarian Slowking hits home right away. I think the design looks great, I love the ‘goth’ look it's invoking and the prongs on the side of its head are a nice callback to the ‘nozzle’ from Galarian Slowbro’s Shellder. The idea of the Shellder seemingly taking over Slowking akin to how the mushroom on Parasect’s back takes over that Pokémon intrigues me, though its official description doesn’t clarify if this is truly the case or not. It’s typing is the same as that of Galarian Slowbro, Poison/Psychic and while that may be disappointing to some, I think it fits the Pokémon. With how it's unique move and ability are focused around support in contrasts to Galarain Slowbro’s offence it has more than enough going for it that it won’t feel like a retread of what it’s ‘brother’ already gave players. So yeah, I quite dig Galarian Slowking and can’t wait for the chance to use one for myself!

The trailer itself shows us quite a few things, telling us a little more about the story as well. It’s not much, but the jest of it is that you’ll be appointed as the head of a research expedition by new character Peony (who looks an awful lot like chairman Rose btw, will the two be connected somehow? You will spend your time mapping out The Crown Tundra and hunting down the Galarian forms of the Legendary birds as well the Legendary Golems. What The Isle of Armor was criticized for was that the trailers and pre-release material gave too much away when it came to the story. Basically, it told you all of the major plot beats. It appears that the Pokémon Company has taken this criticism to heart as they basically have revealed nothing about The Crown Tundra’s story then what I just told you! With how its story already seems to be much grander then that of the Isle of Armor, I’m very happy that they are keeping us in the dark, letting us experience it all for ourselves instead rather than spoiling us on most of it.

What is discussed in detail are the two new features it introduced, Dynamax adventure and the Galarian Star Contest. Dynamax adventure is a much more robust variation on Raid battles. You and up to three other players go inside a Raid den, exploring its giant maze-like cave. During your exploration, you can choose a different path, with the path chosen letting you encounter different Dynamaxed Pokémon. If you and your friends make it to the end, you’ll encounter a Legendary Pokémon and get a chance to capture them. Dynamax Adventure, with all of its restrictions like rental Pokémon and HP and PP carrying over to the next battle, will surely not only bring a new co-op feature to the games but bring some challenge as well. Speaking about the legendary Pokémon, ALL of the franchise Legendary’s from generations 1 to 7 will return albeit version exclusive. That’ll keep us busy for a while!

The Galarian Star tournament will provide players with a new(ish) battle experience after they complete story of The Crown Tundra. You team up with one of the many characters you’ve encountered during your journey like Gym Leaders and rivals in a 2 against 2 double battle. Nothing fancy really, we’ve gotten this type of battle in other games before. As someone who isn’t as big into battling anymore, this isn’t something that really interests me. I’ll still check it, but I don’t think I’ll get much out of it beyond the unique dialogue the characters will have.

Rounding out expansion pass news it the release for The Crown Tundra, October 2nd (more on that later) and the announcement of new physical versions. Coming November, right on time for the holiday season, physical copies of Sword & Shield with the expansion pass on the cartridge will come to stores. Figured this is something they would do, many people would pay extra to have it all on one cartridge after all. Plus, this will give them a “new” physical Pokémon game in stores for this holiday season and stuff like download only DLC is still something that many kids and parents struggle with. For them, this is just much more convenient and easier to understand. Box-art looks bad though. Just saying.

Now for those ‘goodies’, I alluded to. The big one is that the long-awaited Pokémon Go and Pokémon Home connectivity is finally coming. No specifics on how it will all work as of yet, but it is set the go live sometime before the end of the year. On top of that, there are also some bonuses to look forward to! The Mystery Box you got in Go, the one that spawned a bunch of Meltan near you that you got from connecting to the Let’s Go games will now also appear when you do the same with Pokémon Home. Very nice for the folks who don’t own a copy of the Let’s Go games like yours truly. Even better, after transferring Pokémon from Go to Home for the first time you’ll reward with a special Mystery Gift: Gigantamax Melmetal.

Already known to most players thanks to data miners and a snafu during an official Pokémon League tournament, it has now been officially revealed. This distribution keeps the whole ‘Meltan & Melmetal are Go exclusives’ trend going. I’m not all that fond of this ‘exclusivity’ but I find it a nice reward for making use of the service regardless. Now we only have to hope that this ‘you need to pay coins to transfer Pokémon between Go and Home’ doesn't go any farther then speeding up this cooldown period the Japanese Go support page speaks off. It's still something I wouldn't implement in the first place but it's at least better then what it could've been.

We’ve also been shown that, to celebrate the release of The Crown Tundra, all of the different Cap Pikachu’s will be distributed to Pokémon Sword & Shield. Starting today and lasting until the end of the year, you’ll be able to receive all the different Pikachu wearing a hat every few days or so. A nice chance for players to get their hands on these nifty set of Pikachu’s. The entire live stream ended with the debut of a new song by the Japanese pop band Bump Of Chicken called Gotcha. Can’t say I really liked the song, but the animation of the music clip was impressive. I recommend you seek the song out for said animation alone, it’s quite stunning!

I’m quite excited for The Crown Tundra, now more than ever. I was always more interested in this part of the expansion pass than the Isle of Armor as it looked like it would be much more focused on its story. Its release date of October 22nd isn’t ideal for me personally though. Next month is going to be a very busy one for me and I don’t know how much time I’ll have to play it let alone review it. I might be able to get said review on 31st October at its earliest, but we’ll just have to wait and see.

Overall, I’d describe this presentation as much more relaxed and low-ley then the one from The Isle of Armor back in May/June. I felt that the pacing of the presentation was much slower and less hectic. This may be because there wasn’t as much info about The Crown Tundra itself shown as was with The Isle of Armor, though there were more extra goodies. I really don’t have a problem with this approach, it just means that we’ll get to discover more for ourselves. With The Crown Tundra trailer, word on the Go and Home connectivity, something many had been waiting for, as well as a slew of distributions to boot and this was a very fun Pokémon live stream.