The rumours were true! 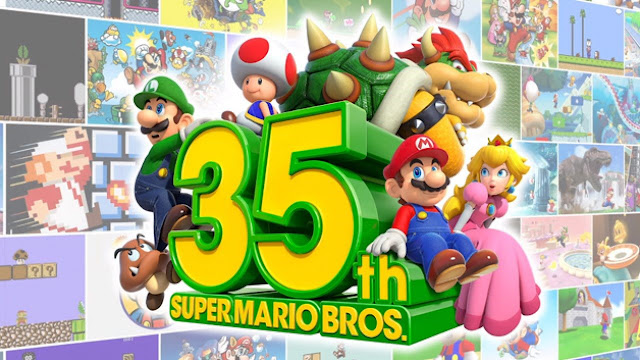 For quite a while now, rumours floated online about Mario's 35th anniversary this year. From a port of Super Mario World to a collection of remastered 3D Mario's, it was enough that many felt that these rumours were real. I thought so as well, which I why I covered these rumours as well as alluded to them in previous posts. With the actual anniversary date, September 13, fast approaching it felt only a matter of time before we would hear something from Nintendo. It's why I opted not to include any Mario games in my 'some potential 1st party Switch ports' last Wednesday. Yesterday was that day my friend! Nintendo shadow dropped a 15 minute Mario Direct on us and I feel passionate enough about it that I've put myself into overdrive to write this post about! Without further ado, because we have a lot of ground to cover, let's dig into everything that we learned.

The direct immediately started off with something out of the left field. A Game & Watch system that had the original Super Mario Bros. game on it, as well as The Lost Levels and a recreation of an original Game & Watch gaming starring Mario. It's a limited release only, available next month on the 13th, so if you want to have that system for yourself you're going to have to act fast. TO me, this Mario Game & Watch system is a fun novelty. I don't really understand why they chose to make it. I don't see the connection between Mario and Game & Watch, but it does look pretty snappy I admit.

We follow that first announcement up with something many excepted: Super Mario World for the Nintendo Switch (called it!...sorry, couldn't help myself). I mean, almost all 1st party Wii U games have been ported to the Switch and become a success by this point. They wouldn't leave out a Mario game to achieve the same now, would they? The game is basically just the Wii U game on the Switch, nothing really more to say here. Almost nothing. The bright and cheery trailer ended with footage of a seemingly new world with heavy rainfall and a thunderstorm. This is Bowser's Fury. From what I can tell, Bowser's Fury appears to be a new expansion of the game I'm not certain of that at the moment. I do know that the game will not release this year, but next year instead. Oh well. Gives us fans a little breathing room.

Next up, Mario takes a page from Tetris 99 with the brand new Super Mario Bros. 35! From that one sentence, I'm pretty sure you already know exactly what this game is all about. You compete with 34 other players in a Mario level. The last one standing wins.

I've never played Tetris 99 because I'm not really interested in competitive stuff (and my internet connection is to bad for it) but I know that it has been a big success and loved by many. It's thus not very surprising to me that Nintendo decided to make one and it thus looks a lot of fun. I understand that's a Nintendo Switch Online exclusive like Tetris 99, but limiting it to just a few months of play is just a bad decision. I just don't see any reasons for that what so ever and I feel this limit will haunt it. Oh well, nothing I can do about that so better just move on to the next announcement.

Many people have been debating what the next entry in Mario Kart would be. Would they opt for new DLC for the immensely popular Mario Kart 8 Deluxe or go for Mario Kart 9 instead? Neither is the case, as Nintendo has decided to some completely unexpected instead. Mario Live Home Circuit mixes real-life with the virtual world. You create a track in your own living room for example, where you'll race actually Mario Kart karts. That's a lot of fun in and of itself, but each kart also has a camera. This camera streams the live feet to your Switch, was it basically become an actual Mario Kart game. You see a 3D back view of your own kart, as well as 3D models of the others and be able to use items. It's a neat concept that reminds of the toys-to-life of old like Skylanders. Only this time, it's the game that enhances the real-world experience and not the other way around. Time will tell how successful, and pricey, this concept will be.

Before jumping into the final announcement some time is given to showing off all types of Mario themed events and merchandise coming in the next few months. From a Mario themed splat-fest in Splatoon 2, Mario branded furniture in Animal Crossing: New Horizons and Mario merchandise such as branded shoes and other memorabilia. Not much for me to talk about really, other than the Super Mario All-Stars collection. Originally a Wii game for Mario's 25th anniversary, this collection of all of the NES Mario games will see a digital re-release that has already dropped from when your reading this. Not much to say other then I find it interesting that they are re-releasing this anniversary collection for yet another Mario anniversary. I can dig this honestly.

What I sadly don't dig is that final announcement. It's the one we had all been waiting for: Super Mario 3D All-Stars. Ports of Super Mario 64, Super Mario Sunshine and Super Mario Galaxy. This collection disappoints me greatly. The big disappointment to me is that these games are not remastered, but simple ports. They are optimized to run better on the Switch, but they are graphically the exact same as the originals and I feel it's a missed opportunity that also gives this collection less value. I just don't think 64 really holds up nowadays and I don't get why they chose the N64 version and not the much better looking DS version.

Sunshine and Galaxy fare better in this department, but improved graphics wouldn't have hurt those game either. Yeah, it's fun that the soundtrack is included in this collection and that you can now play them portably but I don't think that's enough to get away with not giving them a graphical update. The collection is also a limited release, just like many others on this list, and I feel that's another drawback. If you miss it now, you'll miss it forever. To me at least, this collection has become a lot less appealing because of these two reasons. I would need to go out of my way to get my hand on this collection, only to get one game that I already own and two which look very outdated. If you like this collection and don't mind that they didn't update the games graphically then more power to you, but for me, it's enough of a disappointment that I don't think I'll pick it up.

I do think I will speed up my timetable when it comes to buying Super Mario Galaxy 2. I was going to wait until I actually got a chance to play my copy of Super Mario Galaxy to completion first but I think I might just buy it this very weekend. I fear that, with 2 not included in the collection, there will be a run on it and copies will become scarce. This might not happen, maybe people don't feel like they have to have the sequel to Galaxy after (re-)experiencing it on the Switch but you never know. The original Bakugan game for the DS was suddenly nowhere to be found after the announcement of a new Switch-title and I'd rather not risk such a situation happening again.

Overall, I think Mario's 35th anniversary is shaping up to be quite the experience. The 'big' collection that many people were oh so excited is a disappointment to me, yes. But. There's just so much stuff about to happen that I feel that I, and many others, will still get a lot out of it. From Mario own games to the small events in others. To the memorability. It looks and sounds quite a lot of fun. And this isn't even everything. They have said that more is yet to come and I'm looking forward to it.

So yeah, those are my thoughts. Not the most comprehensive breakdown of the entire presentation, but as I had already covered the rumours and alluded to that plenty I thought it was only fitting to voice my thoughts now that it has all been confirmed. Also, just throwing it out there right now, next year will be Zelda's 35th anniversary. I'm now hoping that they give that franchise a celebration like this as well. Only time will tell if they do, but I''m all for it!