Let’s Talk About the ‘Switch effect’

Some pro's and cons of releasing on the Switch. 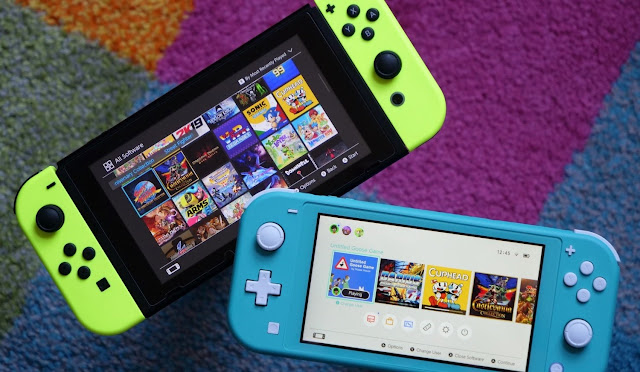 I've got to admit, the subject of this article is a bit of a last-minute change. If you've read through this month's schedule (which you can do when you become subscriber, self-plug!) then you will have noticed that today's post would be 'Let's Talk About the future of DC comics'. I wanted to address the mass-firing over there from last month, the cancelled comics, the new general manager etc. While it's a subject I want to talk about, the more research I did, the more I felt that I wasn't qualified to do so. It involves a lot of corporate and industry struggles and a lot of stuff that went straight over my head. I might retool the post later down the road, turn into something more akin to 'what the future of the comic industry might look like' but for now I'm giving it a rest.

I found myself with a hole in the schedule but instead of pulling the rest of my schedule forward with a week I've opted to fill the gap with something I thought off when writing last week's post, Let's Talk About some potential 1st party Switch ports. In that, I talked about the 'Switch effect' and how a Switch release will benefit a franchise greatly. Since then, I've been thinking about how there's the 'Switch effect' also comes with some (potential) negative consequences for a franchise that are slowly becoming more and more apparent. Before I talk about those though, let's first discuss what the 'Switch effect' is exactly.

The 'Switch effect'; what do I mean by that exactly?

The 'Switch effect' is pretty easy to explain, it's not a hard concept to grasp. When you compare the sales of games from franchises from other platforms to those of the Switch, you can see that the Switch games have sold more. Many times, these games haven't just sold more copies than before but the Switch versions are even the best-selling entries in their respective franchises. The Legend of Zelda: Breath of the Wild, Splatoon 2, Fire Emblem: Three houses are all examples of this. It's not just new entries in franchises that have seen a rise in sales but simple port jobs have been widely successful on the Switch as well. Take the Switch's highest-selling game (at the moment) for example. Mario Kart 8 Deluxe has sold over 26 million copies worldwide and boasts an attach-rate of over 40%. Those are insane numbers for a game that's just a slightly updated port.

And it's just not this one game, it's not just Mario Kart that got ported over from the Switch's predecessor the Wii U. Donkey Kong Country: Tropical Freeze, Super Mario Bros. U Deluxe, Bayonetta 1 & 2 the list goes on. Wii U titles ported over to the Switch with some minor additions who have sold very, very well. This business model is as a success for Nintendo and there's no sign of these ports stopping anytime soon. Pikmin 3 Deluxe and Super Mario 3D World are in the pipeline and there are still many other Wii U games that they could give a second life on the Switch. It has become kind of a wanted thing amongst fans, we expect more Wii U ports to come and I've been no different myself

I can already hear you thinking: 'Of course all of these games sell better on the Switch. It has sold a lot more units than many of Nintendo's previous consoles. More consoles sold mean more software sold as well.' Yes, you're right. A console with a higher install-base will naturally sell more games for that console as well. However, when it comes to the Switch, this is only a part of the story. Not only do these titles sell much better on the Switch but they tend to boost the sales of other instalments as well. Take Super Smash Bros. Ultimate for example. Before the release of that game, my local Media Markt had still quite a bit of Super Smash Bros. Brawl, 3DS and Wii U left.

You'd think that with Ultimate just released, people would flock to that game instead and this leftover stock of the older titles will remain on the shelve even longer. To my surprise though, the opposite was the case. These older titles flew off the shelves almost as fast as the newest one. A little talk with one of the employees revealed that this wasn't an unprecedented thing, but that he personally had seen it much stronger with the Switch than with other consoles.

The power of the mainstream crowd

I think this the result of the real strength of the 'Switch-effect': it makes the franchises more visible, put them more in the 'mainstream'. Take Luigi's Mansion for example. The original on the GameCube was remembered and loved, it got 2nd game on the 3DS a few years back, but overall it was more of a niche franchise than anything else. Luigi Mansion's 3 from last year wasn't just commercially successful but introduced a slew of more people to the ghost-vacuuming Mario spin-off but it has become much more visible as well. If you still have trouble grasping what I mean, Animal Crossing: New Horizons is a more extreme example of this. Going from a healthy franchise for Nintendo with entries on almost every Nintendo console since its debut to a world-wide phenomenon.

This hasn't been just due to the power of the Switch but I felt like mentioning still. Having high sales are always a benefit, no doubt, but this increase invisibility is an even better blessing. You could say that many of these franchise is 'upgraded' when it comes to recognizability and that's something that a publisher can harvest the profits from for years to come.

That many franchises have seen success after coming to the Switch doesn't mean that this trick works every time. Take one of Nintendo's own for example Super Mario Maker 2. The first game was a run-a-way success on the Wii U. That consoles very low install base didn't keep that game from becoming quite popular, especially on Twitch. With how successful other franchises have been on the Switch and its higher install base, you'd think that Super Mario Maker 2 would be even more successful. Well, not really. It did well no doubt, moving over 5 million copies but this was considerably less than the 7 million copies of the first game. The game underperformed and hasn't been as popular as the first even though it had all the makings to be a huge success. The Switch has helped boost many games and franchises, but that doesn't mean that success on the platform is a given.

When the 'Switch-effect' does come into play there's still a potential pitfall that is slowly starting to show itself and the reason why I wanted to write this post. The games risk, especially when very successful, becoming the 'definitive' one on the Switch. Thus, when a new game comes around it won't be able to measure up. The law of diminishing returns means that a sequel to a game, especially when on the same console, won't sell as many copies. There are many reasons for this, but the one I will zoom in on is that not everyone feels like taking the 2nd dip. They're satisfied with the game they have and don't feel like buying the sequel. With how well many of the games have sold on the Switch they have established themselves as 'the' game on the platform. New Super Mario Bros. U Deluxe isn't just 'a' Super Mario game on Switch, but 'the' Super Mario on Switch. With the original game so ingrained in people's mind, a sequel would have a harder time breaking through.

Let's go back to Mario Kart 8 Deluxe once more. With so many copies sold, you'd think that a sequel would do even better but I think that it won't. Mario Kart is very much a game that is best enjoyed in multiplayer. You can play it by yourself, but multiplayer really is where it's at. A Mario Kart 9 would appeal to the core Mario Kart fans, and the competitive scene, but for more casual players it wouldn't. They already have a Mario Kart and whatever improvements 9 would bring to the table won't be that large, the Switch isn't that much more powerful than the Wii U after all. It's why I still think that DLC for Mario Kart 8 Deluxe would be a better strategy. I think it would be an easier sell to people. Drop a few extra bucks and you get all of this extra stuff like cups, characters and items.

Not every type of game will suffer from this though. With the Breath of The Wild sequel, I don't think it will step on the toes of its predecessor along as it's different enough. As long as there are enough differences, and the game is not heavily multiplayer-focused, this would be enough for most people to convince them the sequel might be worth it.

So, that's the Switch effect and its pitfalls. It's not just that a release on the Switch can result in higher sales but it can rejuvenate the franchise. Bring more attention to it, both for the older games and for potential new games. However, this isn't a given to happen and even if it does, it can run the risk of becoming so 'definitive' a follow-up wouldn't do well. Still, even with these pitfalls, what the Switch can offer for a franchise is an opportunity to good the pass up. We see this with Nintendo themselves with their Wii U ports but also from other publishers with the Witcher 3 and the Outerworlds. All in all, I think it's great that the Switch brings a spotlight to so many old franchises and I hope that the 'Switch effect' will encourage more franchises to come to the platform. Be they old ones that deserve a boost or ones that just have never been on a Nintendo console before.