My 1st week with the PlayStation 5!

Well that was quite an unexpected, but very welcoming, development! 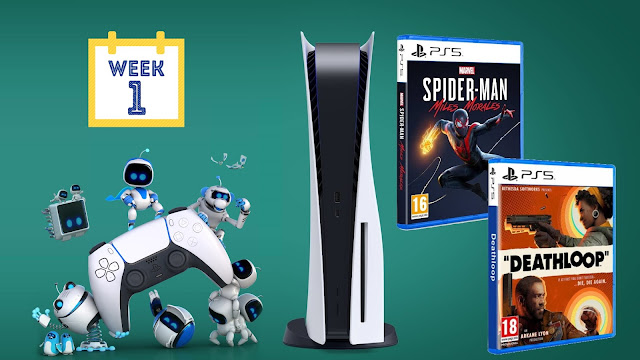 As of Thursday, November 18th, I´m the proud owner of a PlayStation 5. Disc version, naturally. It was quite an unexpected turn of events, let me tell you! I had an eye on the PS5 ever since its launch. I've been a happy Nintendo gamer for well over a decade now but that doesn't mean I ever wondered how it was... on the other side. Tomb Raider 2013 can be blamed for that. Ever since I saw Angry Joe's review of the game I've desperately wanted to play it. Over the years titles such as God of War, Spider-Man (both of them) and even Horizon Zero Dawn have found their way on this list as well.

So yeah, I wanted a PS5 like so many others. Perhaps in 2022, when I've had to save up for it and when you can actually buy them in stores was my way of thinking.

That was how I thought it would go but as you can read, that's not how it went down. You see, on that faithful Thursday when I left work I saw that my mother had texted me. "Call me back the moment you leave work". I did and, as you can guess, it was about the PS5. A co-worker had heard that GameMania (think the Dutch Gamestop) had PS5's in stock but you could only buy them if you showed up in person. They weren't listed on the online store and even if you called the store they wouldn't give you a straight answer. My guess is that this is an anti-scalping measure.

My mother's colleague went to GameMania in her break (which is barely a 5-minute walk from the building just so you know) and low and behold: they had PS5's in stock. After returning to the office my mother started to ponder 'didn't my son want a PS5?'. Hench the phone call. And that's how I got my PS5. And Spider-Man: Miles Morales. And Deathloop. The PS5 GameMania offered was part of a bundle and had to be sold in said bundle (my mother asked about it). Spider-Man: Miles Morales and Deathloop came with the PS5, whether I liked it or not.

OK, that was the story of how I got my PS5. But how's my experience with the console been so far? I mean, the entire point of getting a PS5 is gaming on it. So far it has been pretty nice. Pretty nice indeed. And a bit weird. As I said, I've always been a Nintendo gamer and Nintendo always does its own thing where Sony & Microsoft are more 'mainstream'. Nintendo is all about gaming, Sony & Microsoft have moved towards providing a 'multi-media platform'. It has got lots more bells & whistles to it, has a much fancier interface and relies on the internet a lot more. It's neat, but I can't say I´ve had the pleasure of fully exploring what the PS5 brings to the table in this regard.

Internet here is pretty bad. My laptop loses its Wi-Fi connection at least once a day, sometimes failing to re-connect for up to an hour. My Switch has never managed to connect to the internet while in my room and the PS5 now has similar problems. I managed to download the necessary updates to the system and the games by connecting it to an ethernet cable but that's not something I can do 24/7. Old walls mean that it would be very difficult to lead the cable through the wall. I have to lead the cable all the way through the living room, two hallways and a set of stairs. So, no PS5 internet for me. Oh well. Hasn´t stopped my from enjoying my fancy new toy.

And fancy is the right word. From the start-up sequence to the menus, the PS5 certainly has a premium feel to it. It's all very spiffy and cool looking. And the hardware is nice looking. I can dig the aesthetic. And big. And heavy. I hadn't looked up the PS5 measurements but let me tell you: it's bigger and heavier than you'd expect. Think the original PS2 but even bigger than that. Sizing down to a slim edition is definitely something I can see Sony do later down the line but for now, the PS5 is big and beefy. Needed to redo my entire setup to fit the darn thing in but it's a small price to pay. The PS5 controller is neat. It's heavier and bigger then I'm used to but comfortable nonetheless.

With the hardware out of the way let´s talk games. As I said, the PS5 came bundled with Deathloop and Spider-Man: Miles Morales. With Spider-Man: Miles Morales I was already planning on buying it so that one isn't a problem at all. Deathloop though? I know nothing about that game other than its Game of the Year nomination. Having looked into it a bit more I now know it's a first-person shooter with time manipulating elements. Not really my thing but that GOTY nomination has to count for something, right? Haven't even removed the plastic seal yet as of the time of me typing this though so I'll see.


So yeah, been playing a lot of Spider-Man this last week. And a little of Astro but that has been so little that it's not really worth mentioning. I want to play it more but the call of Spider-Man has just been greater. And I've been enjoying it a lot so far. I won't go into details regarding the game itself, that is where a review is for. What I'm here to talk about is more my overall experience just gaming on the console.

I see the graphical changes between the PS5 and Switch games but can't say I'm too impressed by them. Graphics have never had a priority for me so while I see the improvements they don't blow my mind. What I appreciate far more is the PS5's speed. How quickly you can get into a game, switch games, load up save files and areas etc. I haven't noticed any ugly pop-in, no assets that took longer to load or anything like that. I've never been hard on such things before but that doesn't mean I don't appreciate it here. I've got less time for gaming these days so everything that saves me a little time to just play is very welcoming.

So that has my first week, my first experience, with the PS5 been. So far, it's been pretty great. Even without all of the Internet connectivity features, I've been enjoying my time with the console and most certainly with Miles Morales Spider-Man. What comes next, you ask? Well, I used Black Friday to buy some PS4 I always wanted. Got Marvel's Spider-Man so I got a matching set with Miles Morales. God of War is a game right up my alley: an immersive single-player experience rooted in mythology. Horizon Zero Dawn because it's an award-winning game from a Dutch developer (gotta represent) with a very interesting world. And, of course, Tomb Raider: Definitive Edition. I finally got the means to play this game and I won't let me pass it by!