Embrace Your Destiny, Conquer the Darkness. 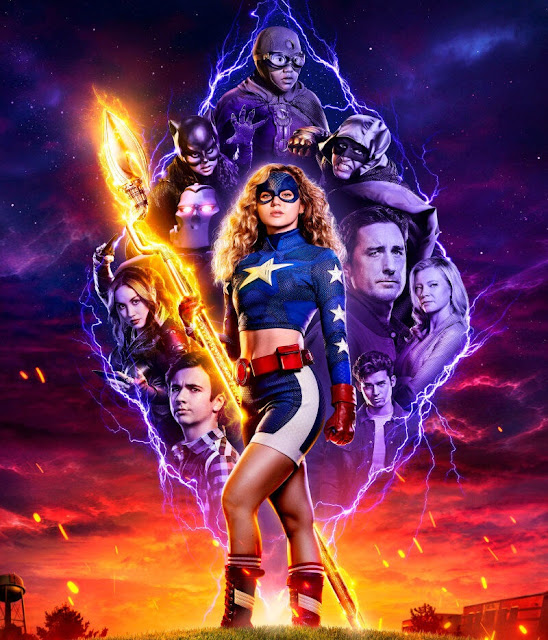 With the demise of the DC Universe streaming service, most of its shows migrated to HBO Max. Most of them. Stargirl's first season aired simultaneously on DC Universe and the CW so it wasn't too surprising that Stargirl Season 2 would move to the CW completely. The only question many people had: how will this affect the show? The CW doesn't have the same level of quality for its shows as those on DC Universe. Luckily those worries were unfounded. We got a season that wasn't that far off in quality from season 1. One that leans into the horror genre to surprisingly strong effect.
Let's dive in!
After defeating the Injustice Society of America, Courtney AKA Stargirl is ready for the next big villain to show his or her face in Blue Valley. The rest of the JSA however are less ready to jump into action and are more than satisfied to just have a quiet summer vacation. That is, until, former ISA member The Shade comes to town and Courtney's arch-nemesis Cindy AKA Shiv returns to it with the demonic entity Eclipso in tow.
Can the JSA face the darkness that has come to Blue Valley or will it tear them apart?

The story of Stargirl season 2 is split into two halves. Two arcs, you could say. The first focuses on Shiv and here recruitment drive for the ISA and it´s this first half that I feel is the season´s weakest. It´s not bad, don´t get me wrong, just not as concise. It has a lot of gears turning, lots of characters to focus on, just like season 1. Seeing each member of the JSA is struggling with personal demons is certainly interesting but it just gets easily muddled with the many, many plot lines that are in each episode.

Comparatively the second half of the season is much more focused. Episodes 6 & 7 are real game changers which shifts the story in a different, much more personal, direction. It focuses on a smaller cast of characters leading to much tighter episodes. Even the absence of certain characters isn't a problem as it's part of the story and actually ups the tension quite a bit whenever their absence comes up.

The difference between bad and evil and the darkness that everyone, even the shining light that is Courtney, has inside of them. After season 1 builds the JSA and these characters up, season 2 breaks them down expertly. It leads to great tension and twist but also character deconstruction and growth.

What both halves do very well are the visuals and conveying the atmosphere. When I said that this season was darker I didn't mean the 'dark and gritty of the Nolan Batman movies or the Arrow TV series. Instead, Stargirl season 2 takes a dip into the thriller/horror genre with its big-bad: Eclipso. Eclipso is the 'spirit of corruption'. His entire stick is that he pushes people to do bad things and then punishes (read: kill) them for it. He toys with his victims by getting into their heads and making them see and hear things that aren't really there.

To convey all of this the show takes a page from horror movies. From the lighting to the set design to not pulling any punches when it comes to making the characters, and the audience, uncomfortable to watch. You can see that the crew behind the series did their best to mirror the cinematography of thriller/horror movies. And it works wonders. Oh, and don't worry if you're a bit squeamish. The season never throws gore or jumpscares at you. It's all pure tension building.

It's actually pretty ingenious for the show to dive into the horror genre with the Covid-19 pandemic making the production of season 2 difficult. Using only two to three characters in one and/or deserted locale is easier to film under restrictions and is what all those thrillers do all the time to up the tension. It's a win-win!

Where the show does makes a miss-step is with Eclipso. While his design is amazing, from his look to his movements, his characterization leaves something to be desired in that he barely has any. For the majority of the season, Eclipso is utilised more as a force of nature than a character with motivations. This is fine for the spectacle, for making him scary, but not that much for making him an interesting or very memorable bad guy.

The performances of the cast are still as good as it was in season 1. Better even for some. Where in the first season Luke Wilson and Brecc Brassinger were the standouts (and they're just as good here) other members of the cast take more of a spotlight this season, acting-wise. Yvette Montreal has a lot to dig her teeth into this season and she does it exceptionally well. Cameron Gellman, Anejelika Washington and Meg DeLacy get more opportunities to shine this season as well.

A lot of people worried that with the move to the CW the budget of the show would take a hit. Thankfully, this isn't the case. I think. Looking at the sets, costumes and CGI etc. it's pretty much the same quality as the 1st season. However, I have noticed that season 2 doesn't have as many big set pieces as season 1. Pat's S.T.R.I.P.E. robot is out of commission for most of the season, the JSA suits up and use their powers less etc. This might have been a result of the pandemic but it could've just as easily been a cost-saving measure. Either way, while the set pieces/action of the season was just as good as the first, I do think it wouldn't have hurt if season 2 would've had more of this.

Stargirl Season 2 is another win for DC television. The move from streaming to a network hasn't impacted the show much, if at all. It's still a quality product that's well written, well-acted with convincing special effects. The darker tone and a bigger focus on character conflict that makes it stand out from season 1. There are some miss-steps, the same ones from season 1 sadly, but by and large season 2 is just as good as the first and thus gets the same level of recommendation from me. Go watch it!