You have failed this city! 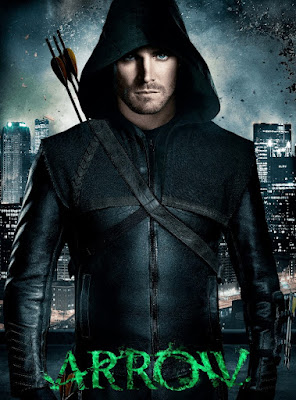 After the end of Smallville, the CW wanted to follow the series up with another DC Superhero show to keep the success of that series going. While you might think that after Superman they would try to follow up with a Batman series, well, you're not completely wrong. The character of Green Arrow was rather popular in the Smallville show so the CW decided to give him his own series but with a new actor in the lead role and set in a completely different universe. This is where the Batman inspiration comes in, the first season of Arrow wears its influences on its sleeves. It's very clear that the series, its 1st season at least, is the CW version of Christopher Nolan's Batman trilogy.

With the benefit of hindsight, we know that this 1st season was a success. It gave rise to an entire universe of superhero shows like The Flash and Legends of Tomorrow while Arrow itself finished its run earlier this year with a (shortened) season 8. A lot has changed since 2013 however and with so many superhero TV shows and movies to choose from, is there any reason to check out this 1st season nowadays? Does it hold up? In my opinion, it does, if you're willing to overlook some flaws.

The setup of the show is best illustrated in the pilot episode, which I'll recap for you now. Oliver Queen, the son of the late billionaire Robert Queen, is rescued from an island in the North-China sea after having been shipwrecked there for 5 years. He returns home to find a changed family and city. His mother, Moira Queen, has remarried Robert's good friend Walter Steele who is now in control of his families company: Queen Consolidated. His younger sister Thea didn't cope with the loss of her father and older brother very well and has both a juvenile record and drug problems. Hist best friend Tommy Merlyn hasn't changed much at all and his overjoyed to see him again, yet the same can't be said for his other best friend and ex-girlfriend Laurel Lance. Now working as a lawyer at CNRI, a pro-bono law firm in the Glades, the poor and crime-ridden district of the Starling City, she is none too happy to see Oliver as he had been cheating on her with her sister Sara who was also on board.

Oliver didn't come back the same man he was: he has become physically fit, a master archer and is driven by a desire to 'save his city'. When staking out a place in the Glades were Oliver intense to set up his lair, he and Tommy are kidnapped but Oliver manages to escape and kill them. This incident puts him at odds with Detective Quentin Lance, Laurel and Sara's father, and his mother assigns him a bodyguard, John Diggle, which complicates his plans. Using a welcome back party as a cover, Oliver suits up to take down the first name on the list his father provided to him: Adam Hunt, a corrupt businessman. Oliver is successful in his effort to neutralize Hunt.

He fights off his security and manages to hack his computer system, transferring 40 Million dollars to all of Hunt's victims. While Oliver plans his next move in his effort to clean up the city, it's revealed that his mother was behind his kidnapping and that something more sinister afoot. In flashback sequences set during the shipwreck, Oliver recalls his father's last moments. To make sure that there will be enough supplies for Oliver to survive, Roberts commits suicide, but not before asking him to correct the mistakes he made and to one day return home to Starling City to save it.

The best way to describe the early episodes of Arrow, the first half of the season basically, is 'unsteady'. Every new show struggles in the beginning. It's a period in which the cast and crew are still working out those early kinks and Arrow is none too different. The most obvious thing during the first few episodes is that it tried to be Nolan Batman a little too much. From the overall tone to the camerawork and editing, it all screams Nolan, just not as good. The actors didn't seem to have a good sense of their characters either, many of them seemed a bit uncomfortable and stiff while the quality of performance of others noticeably varied, even from scene to scene. I don't think the writing really helped them either. If your name wasn't Oliver Queen or John Diggle, the writing didn't give you that much to work with either. I don't think that on the whole, this made these first few episodes bad, but you could feel the struggle and this first half didn't come out as strong as a result.

Luckily though, Arrow manages to work through its early struggles and by the time of the mid-season finale, Year's End, most of these kinks have been smoothed out. The god-awful voice-over disappears after only a handful of episodes, the actors got more comfortable in their roles and the show wisely eased up on the Nolan overtones. They still refused to call Oliver the Green Arrow, referring to him simply as 'the vigilante' or 'the hood', but they leaned into the comic book roots a little more like with the season's main threat: the Dark Archer. The more the season progressed, the more problems were addressed and the better the show got and the better its focus became.

The first half of the season had very much a 'bad-guy of the week' approach and while I don't feel that's bad in of its own, said bad-guys were rather hit or miss. With the episodes mainly focusing around them, if they fall flat, the episode falls flat as a result. Case and point: the Helena Bertinelli/Huntress arc. Not only felt it both rushed and forced but also as a waste of potential. The intend of the story-arc was for Oliver to finally connect with someone, someone he didn't have to hide is dual-life from as she was just as much a vigilante as he was, but it didn't work because they did it too early in the season. You can't shake up the ground beneath you main characters feet before your character, and your audience, have found their footing yet. The chemistry between the two characters wasn't great either and Huntress wasn't written very good as well. She could have brought so much to the table, but as it stands, she was wasted on this show.

If you're looking for good chemistry between actors, a compelling and well-executed bond between characters, then look no further than the Oliver/Diggle bond. What starts off as antagonistic morphs into a compelling story of comradery. Diggle provides the heart of the show, the straight-man to Oliver's crazy night job and his conscience. Most of the cast does a fine job portraying and building on their characters, once they've gotten used to them, and there are some really good performances here. Amell becomes very good in portraying both flashback and present-day Oliver. He still struggles somewhat with his playboy persona but through small differences like a different tone and body language, he visually improves in that department.

Collin Donnel's performance as Tommy Merlyn becomes one of the greatest near the season's end. Bit of shame that his character feels a bit underutilized near the end, but oh well. John Barrowman as Tommy's father Malcolm is also a treat to watch, if not because it's such a different role than his world-famous Doctor Who/Torchwood character Jack Harkness. Not every performance is the best; Katie Cassidy as Laurel Lance doesn't really work and the character also doesn't really have much to do at all other than be the woman Oliver pines for, while Emily Betty Rickards Felicity Smoak is a little too bubbly and annoying at times. Still, the performances are top-notch overall which is always important.

Also of great importance to the show are the fight sequences, it's a superhero show after all. The show definitely benefits from some great fight sequences and choreography. Many of the actors including Amell have a background in fighting/martial arts and it shows. Many of the stunts are done by the actors themselves and while the cinematography of them aren't always the best, that's only a minor nitpick, because they're all pretty good. Other aspects of the season are good as well, especially for a show on the CW. Set-design, CGI and costume design are better than I expected and the soundtrack, done by who would become regular Arrowvere composer Blake Neely, is distinctive, thematic and very good.

Integral to the show's formula, which would last in some form or another up until the final season, is the flashbacks. Present in every episode, the flashbacks show Oliver's journey while shipwrecked on Lian Yu and how he changed from the irresponsible playboy rich-kid to the stoic, highly-skilled and somewhat ruthless man he is today. Spotting the difference between scenes set in present-day and the past is easy and not just because of the wig Stephen Amell wears. The cinematography is different between the two time periods, with the flashbacks having a much more saturated colour palette and the camera is more chaotic and energetic. Neat. The flashbacks sequences do feel a bit directionless in the beginning, but once a consistent threat in Edward Fyers and his mercenaries have been established and Oliver meets with Slade Wilson they become a compelling narrative in their own right. The present-day storyline takes a bit of a dip after the mid-season premiere, but the flashbacks manage to pick up the slack during this time.

So, how does this 1st season hold up? Is it worth revisiting? I'd say yes if you can get through some of the growing pains. As I said, the early season suffers from some problems that are mostly resolved throughout the season's run, though they might be a bit difficult to get through initially. The quality of the show is good, the acting, set design etc. and it manages to tell a compelling narrative, especially near the end of the season once the focus is put solely on the 'undertaking'. If you're a fan of the Arrowverse or superhero TV in general, you like darker adaptations and if you're willing to overlook some flaws, Arrow season 1 is definitely for you.