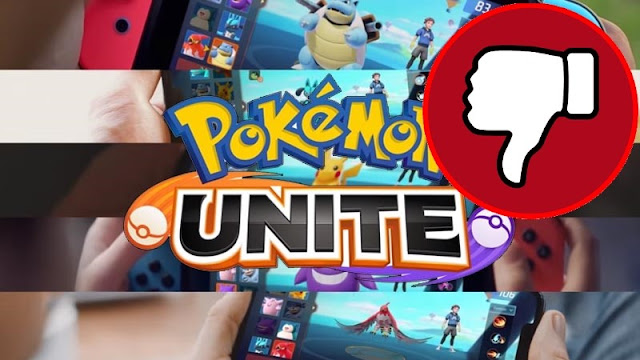 Last week, on June 24th, the Pokémon Company held there 2nd Pokémon Presents for June. After already holding one the week before, they finished that one by stating that they were currently working on a 'big-project' and that it would be revealed in its own presentation. For the week in between these two presents, rumours and speculation were running wild. What was this big-project exactly and why did the Pokémon Company give it its own presentation? The Presents came and went and the big-project turned out to be Pokémon Unite, a new Switch/ & Mobile free-to-start game co-developed by Tencent games. It did not go over well. The reveal is currently the most disliked video of any Nintendo product on YouTube getting over 150.000 dislikes within 24 hours. Why was this game so poorly received by Pokémon fans? I've already given a hint within this opening paragraph to the reasons why. The biggest one, I feel, is the little matter of expectations vs. reality.

The problem with the fans

With every announcement comes speculation and that was no different this time. There were three games that this big-project could be that the fan-base was gravitating towards. The two most discussed were the (inevitable) remakes of Diamond & Pearl and Let's Go Johto games, with a new spin-off title a distant third. I personally was putting my money on the Let's Go Johto games. Not because of the Pokémon plushies sitting right behind Ishihara, which were predominantly Johto Pokémon, but I felt that one made the most sense. While of course not explicitly stated by the Pokémon Company themselves, many people including myself think that the Sword & Shield Expansion pass will take the place of core-series Pokémon game this year. Releasing another core-series entry in the form of remakes wouldn't just go against this idea but wouldn't make sense business-wise. Releasing such games around the exact same time as the Crown Tundra would overshadow it and I'm pretty sure that the Pokémon Company don't want that.

I gravitated to the Let's Go Johto games because they inhabit their own little bubble with fans. Because of the original Let's Go games gameplay differences compared to the regular Pokémon games yet the fact that it does follow the traditional Pokémon story formula, that it's essentially a down-stripped remake, would give a big enough experience and satisfy plenty of older fans as well without overshadowing the Crown Tundra. I didn't consider a new spin-off title as really being an option because I just didn't see them revealing a spin-off like that. They just had a presentation full of new (spin-off) titles, why exclude one of them?

The announcement didn't live up to the expectations fans had and this is what I think is the main reason why the announcement has so many dislikes and why people seem to hate it so much. Not because such a large portion of the fan-base is against the (concept) of Pokémon Unite, which is perfectly fine by the way, but because a small yet vocal part of it is having a kneejerk reaction to not getting what they expected. Because the internet is the internet and comment sections are comment sections, the vast majority of fans who were disappointed or not impressed didn't have such a reaction and probably just moved on with their days, but a part of the fans did and their efforts are what we're currently see playing out. This small but vocal part of the fan base heavily disliking and hating Pokémon Unite and pushing away almost all the other voices.

You might be wondering how it is that many people had such high expectations for the Presents. That has everything to do with the timing. There was a full week in between the reveal of this second presentation and this week did the presentation a lot of harm. It's, as I said, inevitable for people to start speculating and that's exactly what they did. Nothing wrong with that, but it became a bit of an echo chamber something that's very easy to happen on the internet. A lot of people were talking about it and making videos about it, I included. It's a lot of fun but you can get carried away in it and I think that did happen to an extent. I told myself that I would keep my expectations in check but after I saw people talking online about the plushies behind Ishihara and how they were almost all Johto Pokémon, the idea that the announcement might concern Let's Go Johto games got into my head and just wouldn't leave.

Getting caught up in the hype is easier than you might think and this only serves to set you up for a potentially (though in this case not so much) fall. I get it, is what I'm trying to say and I don't blame anyone for it. Most people were just talking about a franchise they love, they had thought or heard of something that exited them and they just wanted to talk about. It's just that, within this week, it all built up to such a high level of excitement and expectation that Pokémon Unite just couldn't match.

The Pokémon Company's part of the blame

The Pokémon Company certainly don't deserve the amount of hate it's getting, but it isn't without blame in this situation, far from it even. They made the one big mistake that made all of this possible: giving Pokémon Unite its own presentation in the first place. If they had just tagged it along with the first presents on June 17th, you wouldn't have had this week of hype building in the first place! If it had just been part of that first presentation I think, no, I'm certain, it would've gone over much better. It would have fitted perfectly with the other games announced like Pokémon Café Mix and the people who are now pouring their energy into hating it wouldn't have. Why? Because of this little game called New Pokémon Snap. Pokémon Snap is a cult-classic amongst the Pokémon fan-base and people have been asking for a sequel, or even a simple remake, for years.

The announcement of New Pokémon Snap and all the excitement and happy faces it brought would have overshadowed all the hate the earlier mentioned small but vocal fans would have had about Pokémon Unite. They simply would have poured there time and energy into that game. I don't think anyone would have had a significantly different opinion on it, but it would be seen as 'just' another spin-off title instead of the 'this will be the worst game ever' as it is now. The presentation itself also wasn't the best put together. Sure, the beginning wasn't bad, but that ending? It's a fun and neat idea to let show people playing the game, with sports-like commentary over it, I give it that, but it went on for far too long and just feels like padding. They could have easily cut this part out to make it shorter which would have made it easier for them to fit it into the original presentation.

You know, the whole situation reminds me of Blizzcon 2018. During that event, Activision Blizzard announced a new Diablo mobile title, Diablo Immortal, in front of hundreds of dedicated Diablo fans and to say that the (immediate) reception to it was bad is an understatement. The question one of the attendees asked 'is this a delayed April fool's joke' went viral and summed up the entire situation up perfectly. Activision Blizzard announced a mobile game, something that hardcore gamers usually look down upon, in front of a crowd chuck full of dedicated fans willing to pay a premium price just to be there. Those people are the hardcore gamers and that's the crowd you decide to announce a mobile game to? Wrong place, wrong time and a severe case of not understanding your audience and those are the same mistakes the Pokémon Company made with Pokemon Unite.

China: a difficult market to pierce

With all of this in mind, why did the Pokémon Company choose to give Pokémon Unite its own presentation? Assuming that the Pokémon Company isn't so out of touch with its fans and the wider gaming community that they didn't anticipate this backlash because I'm pretty sure they're not, I can think of a few reasons. Pokémon Unite might not seem like something big to us, a western audience, but in Asian territories, it's a much bigger deal. MOBA games are massively popular there, it's the primary market for these type of games, where restrictions on gaming tend to be much stricter, like in China. With Tencent games backing the project, a company who has a very, very strong influence and hold over the Asian gaming market it almost assured to pass their strict regulations and become available there. Pokémon Unite might be one of the few Pokémon games fans living in those countries might get and could be the franchise's big break over there.

For Eastern Pokémon fans, and from a business/marketing perspective, Pokémon Unite can be viewed as a dream come true and something you want to give its own due. It can, of course, also be that corporate politics might have had something to do with the decision to announce the game separately and let hype build up but that's something I don't know enough of to talk about here. It's a possibility and I felt that I needed to at the very least mention said possibility.

So Pokémon Unite resulted in quite the backlash in the community. After having been hyped up for an entire week by both fans and the Pokémon Company, the actual presentation was lacklustre and the game was poorly received due to the hype building to such a high level that basically nothing could live up to it. While I think the backlash is mostly due to a kneejerk reaction from a small but vocal part of the fan base, the Pokémon Company did set this failure up for themselves with giving Pokémon Unite its own presentation in the first place. While Pokémon Unite seems to be a perfectly fine game, first impressions are everything and the backlash it has gotten will definitely sour the game in the eyes of many Pokémon fans and will likely keeping haunting the game for quite a while.

To cap this piece of I want to say one more thing. If you like Pokémon Unite, then please, don't be afraid to say so. Don't let the backlash sour your view on the game. If you like the game and want to play it when it's out, then play it. That there's so much backlash and push back towards the game at the moment doesn't mean you have to feel bad about it. If you want to play it, play it and don't let the haters discourage you.