Now that Pokémon Sword & Shield are complete, let’s take a last look at these games. 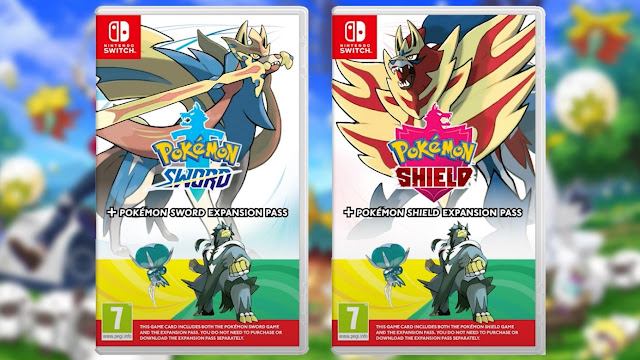 The expansion pass is done, the base-games have been out for well over a year and there's even a fancy new physical bundle out. Time to take a look back at the games I feel! I already reviewed the base game and each DLC part individually but want to do now is take a look at the complete package. To look at Pokémon Sword & Shield in its entirety, expansion pass and all, and see how it stacks up. Unlike those earlier articles, this won't be a review. It'll be more of a discussion type of thing. It's just me talking about my overall experiences with Sword & Shield, some stuff that came up after I already wrote those reviews, some random thoughts etc.

Reading the Pokémon Sword & Shield, Isle of Armor and The Crown Tundra reviews is not necessary to understand this article, but it is recommended. There's some stuff that I discussed in those reviews that I'll elaborate on and you'll also get a better view of where I'm coming from with these games.

Alright then, without further ado, let's dive in!

As you're all no doubt aware, Pokémon Sword and Shield's (pre-launch) history has been rather, turbulent, to say the least. Dexit, that not all Pokémon were programmed into the game and thus unobtainable, caused the biggest uproar in the community since… ever, really. The whole 'gen V won't include any older Pokémon until the post-game thing' is just a little stir in comparison! I didn't talk about it in my Sword & Shield review, only alluded to it, because I didn't want to bring that mess up again. I didn't want to keep beating a dead horse nor allow others to do so, so to speak.
However, I do want to bring it up now as it is relevant to my experiences with the expansion. I still don't like Dexit. I still think that the reasons GameFreak told us were, well, stupid and most likely not the real reason behind the decision but I digress. The point is that the expansion showed an upside to Dexit that I hadn't thought of before: dripping in the Pokémon like this make them much more manageable, especially for new players.

There are currently 898 different species of Pokémon. If you include all different forms, there are over 1000 Pokémon. That's a lot. This can be difficult for seasoned fans to manage (I regularly forget some Pokémon even exist, Smeargle for example) and for a newcomer? This can be daunting, off-putting even. With many Pokémon only coming in a few months later it becomes much easier to get to know and keep track of them all. And, of course, to catch them all. I've heard lots of stories from folks that have finally been able to live up to the franchise's slogan thanks to Dexit. So yeah, I still don't like it but it has to lead to some positive developments in that regard at least.

Also, I'm still holding out hope that the next core series Pokémon game of this generation includes the 200+ Pokémon that are still missing. A complete Pokédex in Pokémon Sword & Shield would then only be a patch away.

Keeping the focus on the expansion: it is quite interesting to see how it has changed people's play pattern. Usually (though not always) Pokémon would come with a third or 'upper' version of their games a year or two later. These games would sport multiple improvements (differences in the story, more post-game content) etc. The expansion pass has taken this third versions place, which has its ups and downs. In terms of the down-sides, it puts more emphasis on the rather shallow post-game of Sword & Shield (something the franchise has always struggled with) as well as not allowing for mid-game fixes. One of my critiques with the base-game was its story problems. That it pushed the player towards completing the gym challenge even if it teased them with other developments. A third version would have been able to fix this, but as the expansion only adds content to the post-game, these problems are still present.

Some of the engine and graphic related issues (which don't bother me personally) are also still present. As a final nitpick: why can't Pokémon follow you in outside of the expansion? They can in the Isle and the Tundra but not in Galar proper. Doesn't seem like that difficult to make it happen in the base-game though I'm not a game developer so what do I know?

On the upside, the expansion pass is much cheaper than a third version. It's 30 bucks for both the Isle of Armor and the Crown Tundra, half the price of what 'Pokémon Lance' would have been.

It also gives rise to a different story structure. Even when Pokémon changed out elements from its 20-year-old formula, replacing the Gym challenge with the Island trials in Sun & Moon, it wasn't much more than window dressing. It looked different, but if you look at how they worked mechanically, it was basically the same as the gym challenge. The basic story has never changed. There are the gyms, an evil team and a legendary Pokémon that tie into the plot. An expansion wouldn't have to adhere itself to this age-old story structure. In other words: the franchise was able to tell a type of story it had never told before. For an old player like me, that was very exciting! I think that the story we ended up getting didn't quite live up to what it could have been, but it wasn't bad either. It just didn't live up to their potential. Understandable. It's the first time the Pokémon team have done DLC after all so some growing pains are to be expected.

That's kind of the theme of these games that I've ended up on: good, but not quite living up to its potential. Pokémon Sword & Shield have been put under a lot of scrutiny, all the way from Dexit to the games graphical capabilities. I will once again state that when it comes to the latter, I really don't have any problems with it. Yes, it is not of the same quality as something like Breath of the Wild but I don't think it looks bad at all. Pokémon is just going for a different style, in my opinion at least. It does, however, lead nicely into one of the reasons why I think the games have been received so poorly in contrast to other entries: people expected more.

With the change from the handheld 3DS to hybrid Switch, there was quite a bit of potential for these games. Not just that the hardware was more powerful and the game could be made bigger, but that long-held fantasy of Pokémon fans about a console Pokémon game as well. Ever since the Red & Green, fans have been wondering what a console adventure would look like. From dynamic battle scenes to massive worlds, there were many expectations put on Sword & Shield. Expectations that it didn't live up to. To me, it felt like a combination of not enough time, some outdated design decision and just unrealistic expectations.

The game featured many small improvements, had many aspects that felt like a stepping stone to something greater, but that was about it. The games lacked polish. Polish that more development time would have given it. The game also feels rather outdated in its design. This is a bit more difficult to explain, but as I said during my discussion about the story, Pokémon still follows the same structure, the same groundwork, as Red & Green in 1996. It worked wonder then, it still works now, but the cracks are clearly visible.

Lastly, I want to talk about Sword & Shield's online aspects. When it comes to the multiplayer/community aspects of Pokémon games, it has evolved considerably since Red & Green. We've gone from simple trades and battles with your friends on the playground using a Link Cable to the infinitude of the internet and worldwide competitions. Sword & Shield added in a brand new online component with the Max Raid Battles. Taking a page out of Pokémon GO's playbook, Max Raid Battles see multiple trainers take on one giant Pokémon for great rewards. While the Raid battles have been growing a bit stale as of late, there has been enough effort put into them to keep them going, to keep them surprising. The shiny Zeraora event is a good example. Tasking trainer with defeating 1 million Zeraora within a small time frame and getting a shiny Zeraora as a reward for doing so. That one was a lot of fun and I'm a bit disappointed we haven't seen anything like it since.

This is where the Pokémon community itself stepped up with the Community Raid hour. Led by Serebii.net webmaster Joe Merrick alongside many Pokémon Youtubers like BirdKeeperToby, it mimicked to Community Raid hours of Pokémon GO. Most Wednesdays from 5pm to 6pm BST, they would set a certain raid theme (like only Eeveelutions) and live-stream their exploits. Using the tools the game have to create something new and exciting to keep players busy. Very cool, if I do say so myself.

So yeah, those were some of the (random) thoughts/feelings I have about Pokémon Sword & Shield. All in all, I'm happy with these games. Sure, they've got their fair share of problems like being held back by some very outdated design philosophy and not quite living up to its potential. However, there's still a lot to love about the games and when all is said and done, I quite enjoy my time with Pokémon Sword & Shield. If the next games in the series, whatever they might end up being, will be given a much longer time in the oven I think those games can truly become the 'next-gen' Pokémon experience fans have been craving.