The Next Generation of Consoles: The XBOX series X and the PS5

The next phase of the console wars is about to commence! 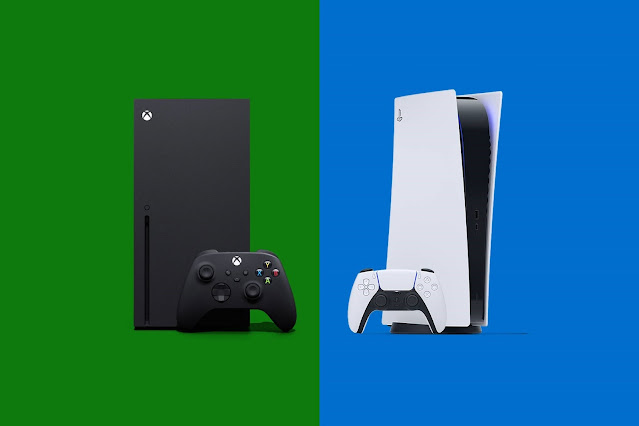 Next week, both the Xbox Series X & S and the Playstation 5 will launch into the world, marking the start of the 9th generation of gaming. To commemorate the occasion, I want to share my own thoughts about these two consoles as well as take a look back at their entire pre-release history.

Not a lot to it this time, it's just those two things so without further ado, let's dive in!

If you ask me, the build-up to the PS5 and Xbox Series X started three years ago in 2017. With Nintendo launching its newest console, the hybrid Nintendo Switch, peoples mind were wandering towards its competitors. How would Sony and Microsoft react to the Switch? Would they stay the course, focus on making their consoles ultra-powerful entertainment centres, or might they try and compete with Nintendo this time?

Remember, while both Sony and Microsoft were very dismissive of the Wii and its motion controls in the beginning. When the Wii took off, however, they pushed their answers, the PlayStation Move and the Kinect, to market fast. Might they integrate portability in their new consoles this time around? Probably not but it does segue nicely into the next point(s): Google Stadia and the shift to digital media.

In the time between the launch of the PS4 & Xbox One and now, digital media have skyrocketed. More and more media is consumed digitally these days, videogames included. This was a trend that had already started but got some real traction around mid-way through those consoles life-span. The physical vs digital numbers aren't at the same level as the industry that started the change, music, or the movie industry but it's clearly on the rise. Not only that, but it offered different types of games.

Publishing on an online storefront, either steam or any of the platform holders own stores is much cheaper and easier. Indie titles have become massively popular, oftentimes offering experiences the 'AAA' publisher doesn't. Digital games and Indie titles have become a big part of gaming, to big to ignore. Sony and Microsoft would surely do something with all of that, but what exactly was uncertain to many. And that wasn't the only thing that had significantly changed since the PS4 and Xbox One's launch.

With the big boom in streaming services like Netflix, offering hours of content whenever and wherever you are, many people were looking at the gaming industry to do the same. Surprisingly, or maybe not depending on your viewpoint, it wasn't one of the 'big three' to bring this concept to gaming. No, it was Google and its Google Stadia service that did so last year. Google offered a service in which, for a monthly fee, of course, you could play any game form a large library from almost any device. PC, Phone, Monitor. You just needed the Stadia controller and an internet connection and you'd be ready to go, the true 'Netflix' of gaming!

Of course, Stadia didn't turn out like this. This was more of an 'it's what we hope it will be in the future' and 'we are focusing on it a lot in the marketing because the Netflix of gaming sounds better then what it actually is' situation. In reality, Stadia launched in a Beta state. Pricey, limited in its capabilities and games you had to buy (for full price) individually. A disappointment to many and one that really isn't doing so hot at the moment. But, the bullet was out of the church, as they say, and game streaming was now something that Sony, Microsoft and Nintendo had to take into consideration.

To see how Sony and Microsoft would react to this change in the industry we had to wait to 2020. While both studios confirmed the existence of their next-gen titles in 2019, giving them a release window of 'late 2020' that was basically all we heard from them. There were some teases, some industry insiders managing to get their hands on some little nuggets of information but that was about it. It wasn't until June when we got our first reveal event. It was Sony with its PlayStation 5 that spilt the beans first. There was lots of technical jargon that I don't understand and won't repeat here, but the important thing was that there would be two models of the console. A traditional disc-based one and a version that would be 100% digital. There were heavy rumours that Microsoft was going to this approach with their next Xbox but there were no indications Sony would go this route. It was quite unexpected.

Sony also made sure that there would be plenty of exclusive games for the console to launch with. A console flies or dies by its games after all! I personally remember Ratchet & Clank: Rift Apart, Horizon Forbidden West (go, go Dutch developer Guerrilla Games!) and Spider-Man: Miles Morales. A very good line-up, if I do say so myself. It would also be backwards compatible with nearly all PS4 titles, something many people very much appreciated. Of course, Microsoft couldn't let Sony hog the spotlight for too long, so it came with its own reveal event barely a month later and it was a lot of the same. Console reveal, lots of technical jargon and exclusive games. Not as impressive as the PS5 reveal if you ask me, though it does have a very impressive library of 'streamable' games through its game pass subscription service. No word on that heavily rumoured digital edition so that was weird.

With both consoles now officially revealed and their release dates set as the final quarter of 2020, the wait for their arrival began. Or, more accurately, the staring contest between Sony and Microsoft began. Here's the thing: with how much tech both companies threw in their new consoles their price would surely be very high. Higher than usual, higher than the PS4 and Xbox One. And both companies knew how important the price for a new console is. Just think back on the Dreamcast/Playstation situation at E3 or the over-priced PS3. Both situations had one console that was much more expensive than the other, and in both cases, the cheaper console was the one that most people bought. They knew that the price of their console would be key to get a head start on their competitor. So here's what their strategy was: wait until the competition reveals the price of their console and then reveals yours, the cheaper alternative.

The problem with this strategy, to the dismay of us fans, is that both Sony and Microsoft refused to blink. Neither wanted to come out with their price and allow the other to undercut them, so they both waited. The result? An agonizing period in which both fans, analysts and retailers were kept waiting. For the latter, this was especially problematic. The launch of a new console is big-deal for retailers. It's an event that has a lot of effort put into it with a lot for them to gain. With how long it took for Sony and Microsoft to reveal the price of their consoles and the release date, retailers were unable to prepare properly. Just look at what happened when the price and release dates were finally revealed.

It was Microsoft that blinked first, though not intentional. You see, those rumours about an all-digital system were true. Known as the Xbox Series S, it was a depowered, cheaper and all-digital version of the larger Xbox Series X. A 'step-in' or 'budget' model. It got leaked online at the beginning of September. With the cat out of the bag, Microsoft officially revealed the Xbox Series S a day after the leak. It would release November 10th for around 300 bucks for the S and 500 for the X. After the announcement Sony, reportedly, held an emergency meeting. They were, again reportedly, aiming for the PS5 to cost as much as 600 bucks.

With the Xbox coming in at only 500, they risked losing out to them if they priced the PS5 higher or losing too much money if it were cheaper. Sony eventually settled on 500 bucks for their machine as well, with the all-digital version coming in at 400 with a release date of November 12th. The pre-orders could begin. And what for pre-orders! The PS5's were especially a mess. Multiple retailers started them too soon, resulting in quite a chaos online. Add in the stock shortages due to the Covid-19 pandemic and both the PS5 and the Xbox Series X/S are much more difficult to come by then the PS4 and Xbox One.

And, that's where we are now. The Xbox Series X/S and the PS5 are both releasing soon with many gamers eagerly awaiting their arrival. What are my thoughts on both systems? Well, for starters, I feel that they are both too expensive. 500 bucks might be cheap for the technology that it houses, but it's way too expensive for a game console if you ask me (as I've argued before). The digital-only versions are cheaper, but I personally prefer physical media over digital. I also feel that a digital-only version is harder to understand, more cumbersome. With old platforms, it's simply a matter of inserting the disc. Easy to understand for everyone and easy to buy as a gift. You just go to the store and buy it from the shelf. With digital, you have to first connect and log-into the online store, get enough credit, buy it, download it etc. It takes much more time and is a more difficult process especially for very young kids or parents/grandparents. It's an aspect I feel Sony and Microsoft don't account for. At all.

Even with these misgivings, I'm still interested in these new consoles. If there's any time for me to get a console that isn't Nintendo it's now. The library of games that I wanted to play but couldn't have become quite sizable these days. With the PS5 backwards compatibility with nearly all PS4 titles, I could finally play them. Aside from that, the exclusives of the PS5 just speak to me more. The aforementioned Miles Morales: Spider-Man as well as the new God of War. I won't be buying one immediately, but I'll be keeping a close eye on the console next year. See what it does. How well the machine is built, wait until some of the childhood diseases have been fixed and hopefully a price-drop or bundle. One thing is certain though: the Xbox Series X/S and the PS5 are going to be the most powerful gaming consoles ever and due to the timing of their arrival, will be very influential in how the industry will move forward.