The rise of the ambitious Marvel project that saved the company. 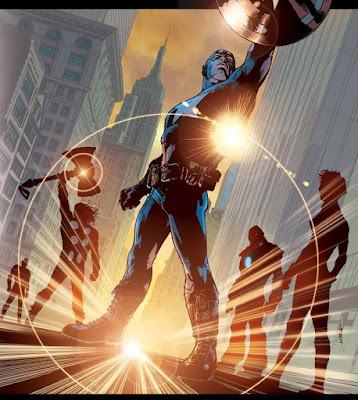 The 1990s wasn't a good decade for comic books. The bubble of the industry, the one that made collecting comic books a genuine way of investing, burst. What was once an industry that saw almost a billion dollars in revenue only half a decade prior was now one that could barely make back the production costs. Every comic book publisher was greatly affected by this fall in the market, Marvel comics more than any other. The reasons are for this are many, from its character not being considered as iconic as their DC counterparts to just some very unfortunate events regarding its staff.

By 1993, Marvel Comics was on the edge of bankruptcy and the company consisted of nothing more than just a skeleton crew. Stan Lee was literally the only employee the company had anymore. I could write an entire article about Marvel's near-demise (both of them) but that's not what I'm here to talk about. No, what I'm going to go over today is what eventually ended up saving Marvel comics and shaped the company into what it is today: The Ultimate line. More specifically: its beginnings. For the end of the line you need to check out a different article of mine.

Marvel Comics got saved from its demise by a duo of businessmen (hello again, Ike Perlmutter!). They restructured the company, re-hiring a good part of its formers employees as well as bringing in a slew of new ones. One of them was former lawyer Bill Jemas. He had no prior knowledge or experience with comic books before landing his position at Marvel, which was exactly the point. To look at the industry through a different lens and to make decisions that industry veterans might be too afraid to make. After a little while, he saw the problem with Marvel as "publishing stories that were all but impossible for teens to read — and unaffordable, to boot". He proposed that Marvel rebooted their character to their original premise, something that rival DC comics had done more than once in the past. Revert Peter Parker, Spider-Man, back to a teenager going to high-school instead of the married adult he was at the time. Then editor-in-chief, Joe Quesada, opposed Jemas's proposal not wanting to throw out 40 years' worth of stories and unsure how the reboot would be explained. He no doubt had the failure of Heroes Reborn still in his mind.

Heroes Reborn was an event in the late-90's, one of Marvel's attempts to get out of their financial and sales troubles. With the popularity of the X-Men, their big sales cannon at the time, starting to wane they attempted to revive some of their other properties to fill their place. DC had successfully rebooted their entire line multiple times before but such a reboot came with a high risk. Not willing to risk it all, Marvel instead decided to reboot only parts of their universe.

The X-Men and Spider-Man would stay the same, but the Avengers and Fantastic Four would get an overhaul. They hired Rob Leifeld and Jim Lee from Image Comics to work on the partial reboot. Heroes Reborn saw the characters transported to an alternate earth were their lives started anew. Heroes Reborn was a critical and commercial flop. It was plagued by numerous problems like delays and having many of the problems the comic industry was suffering from in the '90s.


The launch of a new universe

Quesada and Jemas would eventually come to a compromise: Jemas would get his wish starting with Spider-Man. However, said reboot would take place in a new title separate from the already existing Spider-Man books. Dubbed 'Ground Zero' Jemas and Quesada got to work on this new line of comics.

After approaching multiple different creators within Marvel getting a rough draft of the new Spider-Man's first issue done, the two eventually hired writer and artist Brian Michael Bendis for the book. Bendis was still a relatively unknown independent at the time and was far from the top-pick for the position. However, Quesada's friend, artist Mark Bagley, who he had approached to do the art on the new book, had worked with Bendis before and recommended him to Quesada. With the creative team behind the Spider-Man reboot found, under the direction of Jemas and Quesada, Bendis and Bagley got to work. The first thing that Bendis did was throw out the existing rough draft, an almost word-for-word retelling of Spider-Man's debut issue from the 1960s.

Bendis wanted to take a different approach. He wrote the book as if it was a TV series, foregoing the then standard comic book story structure. He also did away with the thought bubbles and long expositions, preferring to keep things short but to the point, while Bagley drew the art to as if they were still from a TV show as well. On Jemas's end, he made sure that 'Ultimate Spider-Man' as the team had decided to name the book, would land in the hands of as many people as possible. Another problem the industry, in his eyes, had was overreliance of comic book shops. It was a good place for already existing fans to come together and find special editions, trades, niche comics etc., but hindered drawing in new readers. Jemas thus tried to bring more notice into the comic book by distributing it at chain stores like Payless Shoes and Walmart.

All of these efforts paid off. Launching in 2000, Ultimate Spider-Man became a hit for Marvel, becoming a critical darling and sales of each subsequent issue rose. That last one is especially interesting as usually, the opposite is the case with comics. High readership at the beginning that falls issue by issue. It's why the big two are so fond of relaunching their books every odd year or so. Also, the Bendis/Bagley partnership was a success differently. Their 111 consecutive issues made their partnership one of the longest in American comic book history, and the longest run by a Marvel, beating out Stan Lee and Jack Kirby on Fantastic Four.

With the success of Ultimate Spider-Man, Jemas and Quesada greenlight many more Ultimate comics. The first was Ultimate X-men, hiring Scottish writer Mark Millar for the book. Millar was well known for his, controversial I might add, run on the DC superhero book The Authority. He is known for his political stories, with his work critiquing societal issues, which fits the X-men perfectly. This translated into his X-men book by making the relationship between humans and mutants more realistic and distrustful. Launching in 2001) and based mostly on the 2000's X-men movie, Ultimate X-men was received just as well as Ultimate Spider-Man did.

A reimagination of the Avengers, renamed as 'the Ultimates', followed suit. It was also written by Millar, this time partnered with Bryan Hitch (who also worked on The Authority, just not when Millar was writing it). Millar brought his signature style to the book, reimagining the team and the characters from the ground up giving them little in common with their traditional portrayals. Captain America got a rash and soldierly personality while Thor was ambiguously introduced as either an actual Norse god or a man with a psychiatric disorder, just to name two examples. The main goal Millar had with writing the Ultimate was to make it feel 'cinematic' like 'a blockbuster movie but on the page instead of the screen'. Remember, this was before the MCU was created and the changes of the Avengers getting their own movie was considered very slim at that point. Once more, the Ultimates was a success. It became the highest-selling comic of 2002, with a sequel series promptly put into development.

It's cinematic approach paid off in a different aspect as well. When the Avengers did get their own movie as part of the MCU in 2012, many elements were lifted from the Ultimates. From the African/American Nick Fury to S.H.I.E.L.D.'s role in forming the team to just name a few. The only big Marvel property that hadn't gotten the Ultimate treatment by that point was the Fantastic Four which it promptly got. A team-effort between Millar and Bendis, Ultimate Fantastic Four saw the team reimagined as a group of extraordinarily smart teenagers who got their powers from a teleportation project gone wrong. Yeah. Now you know where the 2015 Fantastic Four movie got its premise from. Surprising no one at this point, Ultimate Fantastic Four was both a commercial and critical success.

Marvel was 4-for-4 with its new Ultimate imprint by this time. Jemas approach had worked and his rebooted and reimagined characters quickly overtook the popularity of their traditional counterparts. The books were selling very well and getting lots of praise all around. There were heavy rumours amongst fans and creators alike that with the success of the Ultimate line, the original comics would slowly but surely be phased out. However, things were far from perfect. From day one, there were some issues behind the scenes. During the first few years, these issues did not have any negative impact on the Ultimate line as you have read. With time though, these issues only became greater and are what eventually caused the line's downfall.

That, however, will be a discussion for next time. Discussing the downfall of the Ultimate imprint right now would double this post in length. So join me next week when I go over all of the problems that caused the Ultimate line's downfall and also its legacy.

I hope to see you there!