A mission for all time. 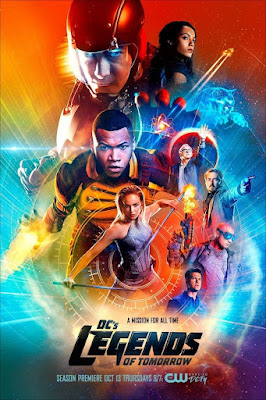 After a rocky first season, DC’s Legends of Tomorrow changed course in its sophomore outing. It introduced new characters, kept its time travelling aspect instead of dropping it in favour of turning the show into an anthology show and above all else changed its tone. While the first season went for a dark, realistic and dare I say philosophical approach season 2 lightens it all up considerably. And it worked wonders. I re-watched the season only recently (purely for fun) and I thought to myself ‘I already reviewed the first season of the show way back when and this is the perfect opportunity to do for season 2’.

So, here it is! Let’s dive into the second season of Legends of Tomorrow and see how the changes caused the show to improve.

After the events of the first season, in which the Legends took down the immortal tyrant Vandal Savage and the corrupt Time Masters, the team has been busy protecting the timeline. While successful, the team’s penchant for mischief and Captain Rip Hunter’s inability to keep them on task means they create just as many problems as they solve. After an incident in the 1940s involving a Nuke, the team is scattered throughout time. Luckily for them, a historian by the name of Nate Heywood has noticed the Legend’s exploits and figured out at what point in history they ended up. After locating the Waverider with Mick Rory still on it, the two bring the team back together though are unable to locate Rip. After returning to the 1940s and making sure that no Nukes are made years before they’re supposed to the team unexpectedly run into the superhero group the Justice Society of America.

The storytelling is the first improvement of the season. While the basic story engine remains the exact same as it was in season one. The team travels to a certain time-period and split up. One group takes part in the A-story of the episode, dealing with whatever is causing the change in the timeline, while the others find themselves in a B-plot usually interacting/helping people from that point in time. The difference lies in the execution and tone. While in the first season the A story was all about taking down Savage and was, for a lack of a better word, rather dark and depressing. The team encountered scenarios like discrimination and a variation of the age-old question time travel-related question ‘would you kill baby Hitler’? While there are still some of these types of episodes here, most notably an episode focusing on slavery, these are far and few between. Instead, the tone of the stories is much more positive and humorous. While the situation the team find themselves can still have dire consequences, like the USA getting Nuked, the situation is handled with a less depressing, more positive, tone.

The focus on the characters and their personal journey over the main narrative plot return as well and is once again improved upon. The personal character stories tie in more directly with the plot this time around and are more coherent. Sara is dealing with become a leader as well as her personal vendetta against Damien Dahrk for him killing her sister. Mick really comes into his own as a character, dealing with the loss of Snart and starting to doubt his own criminal lifestyle. There a decrease in cast members allows each character more time to shine. Episodes do a much better job of balancing the characters and developments are done over multiple episodes. The cast and writers have also clearly become much more used to the characters, resulting in them feeling much more fleshed out.

Not every storyline ‘hits home’ though. On the Legend’s side, Ray losing his suit and thus his ‘purpose’ on the team is cut short for the crossover. New addition Amaya tends to be around more for the development of another character than herself. An extension of how the JSA themselves are handled this season, now to think of it. The team, and the character of Hourman, was the big cliff-hanger of season 1. While featured in the season, they’re in the grand scheme of things not that important and get lost to the wayside.

Moving on to the final improvement of season 2: the villain(s). In season 1, Vandal Savage was no doubt the weakest part of the show. For this season, Legends of Tomorrow makes the bad guy(s) reflect our heroes. A group of villains from both The Flash and Arrow that work together to change their fates. We have Arrow villains Damien Dahrk and Malcolm Merlyn, continuing their great chemistry from Arrow season 4, a still criminal Leonard Snart and the one that brings them all together: the Reverse-Flash. From the villains, its Eboard that gets the most screentime. It’s his own needs that sets the story of the season in motion and it’s Eobard that brings all of these villains together. In many ways, the season is Eobard’s story as much as it is the Legends. Dahrk gets a fair amount of screen time and development in the season as well, being the first Legion member and ties directly into Sara’s story of the season. Merlyn and Cold sadly don’t get as much attention. I got the feeling that writers honestly forgot Malcolm was even a part of the Legion in episodes. He was noticeably absent in instances and the first one to get knocked out on the bad guy’s side on multiple occasions. Captain Cold comes in too late in the season to be developed, though his absence is at least felt throughout the entirety of the season.

The Legion of Doom works very well as the bad guys for a few reasons. First and foremost, each Legion member is plainly sad just a much better character then Savage ever was. Second, they all tie into the Legend’s in one way or another and/or have a personal connection with them. The third is that the banter between the Legion’s members, the chemistry between the actors, is strong and enjoyable to watch. The Legion’s very own focus episode is one of the best episodes in the entire season. Lastly, the motivation of each character is much more personal giving the audience a chance to sympathise with them.

Before going into the conclusion, there is one last thing that I want to briefly talk about. The design of the show. The costumes, the sets and the soundtrack. These all remain top-notch. Legends of Tomorrow is a time travel show. Thus, any inconsistencies in the way a time period is portrayed like the costumes or the type of cars that drive around can easily shatter the illusion. Even with the lesser budget, a network like the CW gives its shows, Legends managed to keep the quality of its sets, costumes and props consistent and successfully convey the different time periods. The GC is not as good though, but it does the job and is passable in most cases. Lastly, the soundtrack is very good. The music is always atmospheric, often beautiful and worth listening to.

Legends of Tomorrow Season 2 brings the Legends back in a very much changed but improved way. The darkness and overall sense of pessimism are replaced by humour and an overall sense of positivity while the time travelling and strong character work remained. It’s still not perfect, they are still problems from the first season present but these don’t hinder the experience that much. All in all, Legends of Tomorrow Season 2 is a very good piece of Superhero television and lay the groundwork for what the show eventually became. It’s a season that I can wholeheartedly recommend to anyone even remotely interested.