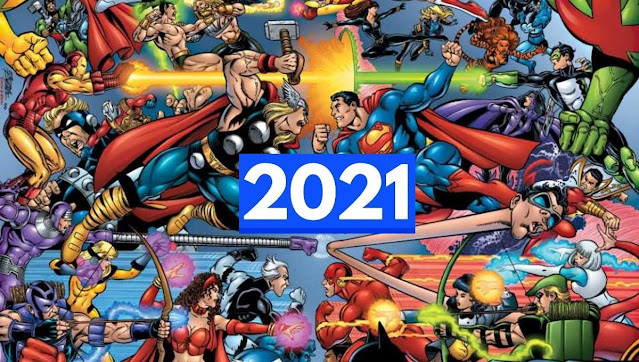 In my last discussion about how I see shaping 2021 (and beyond) up for some of my favourite companies/franchises, it’s time to look at comic books. The comic books of the big two to be exact: DC & Marvel. The comic book industry itself has been changing over the last couple of years. With the big boom in gaming, TV/Movies and streaming comic books have become considerably less popular than they once were. Many would say that the industry is even fighting for its life, though I think that’s being a bit too grim. It’s doing OK at the moment. Not great, but OK. The 2020 pandemic and shutdown didn’t help much, but comic books are once again coming out and doing better than expected actually. What do the big two have in store for their fans in 2021? Are any big changes on the horizon?

The MCU has been Marvel’s trusty workhorse for a while now. The reason why the company isn’t in as big of a rut as DC is. How much of the success of the movies has trickled down to the page is hard to say, but I got to imagine its at least enough to keep it from suffering the same problems DC comics do. I think the MCU’s tendency to use both old and new comic stories for the inspiration of their movies help. I think that this is important as it does two things. When a movie comes out, it always means a spike in comic book sales of the property. Most often then not, however, the books that sell are the old ones. The classic books like for example, Batman: The Killing Joke on the DC side. Not the more recent stuff. This is a problem as these ‘booms’ only last for a short time. The big two have tried to remedy this with tie-in series that resemble the movies more closely, with limited success. More often then not, these tie-in books are not thought out well. They mimic the movies to a fault, doing so even if it doesn’t make sense for the comics.

By making them based on some more recent books, audiences are more inclined to check out the stuff that is actually coming out in the present and stick around. It also makes the current crop of readers feel that they’re continued investment in the current comics has more worth. Considering the very much roller coaster that is current comic book quality, that is quite welcoming.

Aside from that, Marvel just has seen some bigger comic book only success in the last few years. The Immortal Hulk has been a massive success both commercially, its first issue selling over a million copies and still doing good to this day. The X-Men relaunch, while its basic premise is controversial, has definitely been a success for Marvel. It put both the X-Men comics back on the map and is another series that sells above current comic book levels.

With all of that said: 2021 for Marvel doesn’t seem to be all that different from what they’ve done the last few years. They’ll keep publishing their books monthly with series starting, ending and/or relaunching at their behest. In this category lies the current Magnificent Ms. Marvel series. I am a bit worried now that I know that this series is ending soon but with the Ms. Marvel Disney+ series on the horizon and the popularity of the character, I’m confident that this will lead to a relaunch. I’m personally also interested to see if, after the Outlaw event, the Champions will get a relaunch. They’re my personal favourite group of Marvel characters at the moment so any new series with them I will welcome with open arms! Just as long as the Outlawed event doesn’t have the same, depressing outcome as the very similar Civil War.

This all will, of course, be supported by a vast number of event comics. The earlier mention Champions and their event, Outlawed, will conclude sometime in February/March I believe. The Venom centred event ‘Kings in Black’ is starting to get some steam at the moment and should keep the event train going together with the third big X-Men event in, like, a year: Regin of X. Those are the events that we currently know off, but there will certainly be many more in 2021 that we don’t know off yet. Marvel has been building up Mephisto and his machinations across multiple books for a year or two now, so maybe we’ll see the pay-off of that in 2021? Maybe?

Also: in between me writing this article and it going live Marvel teased a return of their old 'Heroes Reborn' event. No really info on that yet but it's certainly going to be interesting. The original Heroes Reborn was, quite frankly, a failure so I'm wondering what made them decide to do another one. Maybe they hope it'll generate renewed interest in Marvel properties like the Dawn of X did for the X-Men? Who knows!

So yeah that was Marvel. Now for DC which has a lot more for us to talk about. 2020 was a very turbulent year for the company and not just due to the pandemic. DC comics saw a large restructuring of their business as well as massive lay-offs. Dan DiDio left as publisher and the future of the DC universe chanced as a result. You can read more about the situation in my dedicated article about the situation in my article ‘Let's Talk About DC's newest event: from 5G to Future State.’. What is relevant about Future State for 2021 is that the event is salvaged from a cancelled wide-line reboot. The trouble DC found themselves in after this decision is the following: 'what are we going to do after the two months of Future State?' Well, the answer seems to be this: a new initiative named Infinite Frontier.

This super-sized one-shot will drop at the end of Future State with a similar purpose that the Rebirth One-Shot had. To give readers a glimpse at the stories that DC (might) put out in the future. To clear up the new state of the DC Universe after the big event, Dark Nights: Death Metal in this case. We don’t know too much about the one-shot itself yet, except that it will be an anthology series with Wonder Woman and the Spectre as its ‘narrator’. It's their story that will tie all of the other stories in the book together.

DC’s comic out-put for March, the first month after Future State, has also already been unveiled. The new line-up has already come under attack by fans, sadly enough. Some of the reasons behind this I can get, some of them I don’t. The amount of new DC books for March has been the biggest point of contention. There are around 24/25 books solicited, a notable step down from their usual output of around 40-60 books. This makes it so that there are a lot of characters who don’t get a new book. Green Arrow and Aquaman for instance. People are angry not only for the titles that are missing but the ones that are present. There are quite a lot of Batman-related titles amongst which are his solo title, Nightwing, Harley Quinn and a Joker title. Some would say that this is a bit much for one corner of the DC universe and I do have to agree with that sentiment.

What I don’t agree with is the criticism about the number of published titles. I feel most of it is unfair. For one: this lower amount of published titles is something we all knew was coming. After DC’s reorganization, we were told that they would put there focus on the quality of quantity. We knew that they were going to publish fewer titles. Until the company is doing better financially at least. Point two: not every new title is going to start in March. The new Green Lantern title, for example, will come out later than March. We don’t know how many titles will start later than March so we might just see those characters return.

For the titles that we do know are coming out there are some I’m pretty excited for. Brian Michael Bendis’s Justice League will continue his Naomi storyline. A bit bummed out that this probably means that his promised ‘Naomi: Season 2’ series is no longer happening but I digress. Naomi is one of my favourite comic book series I’ve ever read so I’m happy to see more of her. The new Wonder Woman series is also a highlight for me. I was already intrigued when I saw the books cover a few weeks back on Twitter but now that I know the premise I’m even more interested. Instead of doing the tiresome trope of the standard superhero death (they die, then come back to life a few years later with a triumphant return) they’re instead going a different route with Wonder Woman’s ‘death’ this time. It seems that they are using the opportunity to explore the different kinds of the afterlife that exist within the DC universe, chronicling Wonder Woman’s journey to make it back to the land of the living. They’re putting the trope upside down and I’m all for it!

How will the DC universe look after that? Well, I can only speculate on that. I’ve got a few ideas in regards to what DC could do with all of the brand new ideas of Future State for one. The Infinite Frontier cover and statements made by some writers indicate that DC is not done with these characters yet. In what form though they might return though, I don’t know. Aside from that, I’m pretty sure that we will see another event sometime before the end of the year. I’d rather not have the big two have so many events in a year, but there’s no denying they are almost always a financial success. Maybe said the event will see the current DC universe and Future State crossover? It’s just a though.

So yeah. Those are my thoughts and predictions for both DC and Marvel in 2021. To quickly recap: I think that Marvel will just keep trucking along as they have been for the last couple of years. DC will try a combination of old and new ideas hoping to improve their fortunes.

In the end, though, these are only predictions. What Marvel and DC are actually going to do in 2021 is anyone’s guess but whatever it is, I’m looking forward to seeing it all play out!