The Future of the MCU

Let's see what the biggest movie franchise of the world has in store for 2021 and beyond. 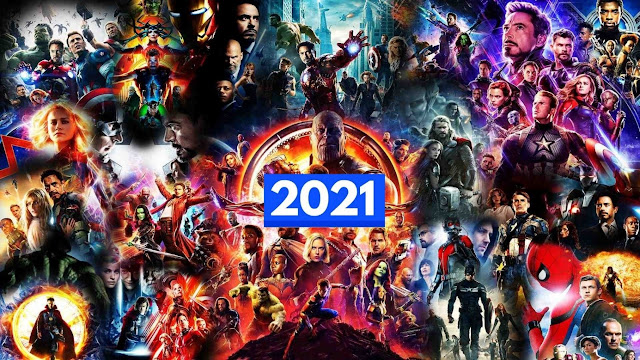 In the second entry of my 2021 'perspective' series, I put the spotlight on the largest movie franchise on the planet: Marvel studio's Marvel Cinematic Universe. 2020 has been, no doubt, disastrous for the movie industry. Movie Theatres have been closed for the majority of the year. The time in which they were open and a noteworthy flick was playing, it failed to bring people in and possibly even made things worse. Just look at Tenet.

For the MCU, this brought along another obstacle: the interconnectivity of the universe. With how interconnected the movies are and how they oftentimes lead directly into one another, the pandemic has thrown this all out of whack. But the MCU is nothing but resilient and Kevin Feige and his crew over at Disney have found a way to get everything back on track and even expand it even more. Let's discuss it all!

That introduction sets the stage quite well, so let's move on to what this post is all about: the announcements of the Disney Investor meeting 2020 and what all the announcements mean for the future of the MCU. And oh boy, were there a lot of announcements! The big takeaway from the announcement is that the MCU is betting big on series and Disney+, but let's not get ahead of ourselves. First, the movies themselves.

Originally, 2020 would have been the start of phase 4. The start of the next phase of the MCU, one without its two heaviest hitters: Robert Downey Jr.'s Tony Stark/Iron Man and Chris Evans's Steve Rogers/Captain America. In May, Black Widow would finally get her own solo movie. It comes after her, and I don't think this is a spoiler anymore, death of her character during Endgame so the movie has a few snags. It's set in between Civil War and Infinity Wars, chronicling Natasha's journey from on the run for the government and her teaming up with Cap, Falcon and Wanda. It's only the third movie in the MCU that takes place at a point in the universe's 'past', so that's something different and quite interesting. The second is that the movie will, in all likelihood, set up the next Black Widow: Yelena Belenova portrayed Florence Pugh.

After this long-overdue solo outing of one of the original MCU Avengers, we would get a movie with brand new characters but still had a connection to previous events. The Eternals, with an all-star cast like Angelina Jolie, Kit Harrington and Kumail Nanjiani. Focusing on a race of immortal celestial, yet human-looking beings, the movie is sad to deal directly with the fallout of Endgame in a way Spider-Man: Far from Home didn't. Eternals is set to be something of a 'Guardians of the Galaxy' again. An obscure property that is so out there that nobody would even think about adapting it yet the MCU is. Will it be a success like Guardians of the Galaxy? We'll just have to wait and see.

Aside from the movies, 2020 would have been the year that the first two MCU Disney+ shows would launch. Falcon and the Winter Soldier would drop during the summer after Black Widow while WandaVision would close of the year and lead into Doctor Strange 2 in early 2021. But as we all know, none of this happened. The pandemic really hit the world hard only a month or so before Black Widow's release and Disney decided to thus pull the movie back. Skipping to the end of the year, and 2020 is the first year since the launch of the MCU with Iron Man in 2008 in which they didn't release a movie. The only MCU content we had this year was the final season of Agents of S.H.I.E.L.D. which, while a good show, has pretty much been ignored by the rest of the MCU and is not really a part of it anymore.

Now, with the discussion about 2020 out of the way let's finally move on to the point of this article: how do I think the future of the MCU will look like? Well, we don't have to look any further than the earlier mentioned Disney investor day. The MCU projects for the next three years were all revealed they're and looking at them a bit more closely you can see where it's all headed: to a massive operation that jumps between the traditional theatre and streaming.

One that might be getting to big. Just look at the amount of content the MCU is pumping out from 2021 to 2023. They are going to be a whopping 12 movies and 13 streaming shows in that time frame. That's 4 movies a year, while the streaming shows are set to come out 6 times a year. I fear that that's a bit too much for audiences to keep up with, but to be fair, the way it's all advertised seeing everything is not a must. The streaming shows seem to be mainly divided into two categories. Shows that tie into directly into a movie project and the once that try stuff that the movies won't. WandaVision is a good example of both categories, should the rumours turn out to be true that is. It falls into the latter category as its focus on Wanda's mental state and the ever-changing environment around her (based on old TV sitcoms) is something the movies would never explore. It will, reportedly, also tie into directly with the as of yet untitled Spider-Man 3 and Doctor Strange: the Multiverse of Madness. We know from casting news, industry insiders and the like that Wanda is responsible for blowing the Multiverse wide open. Spider-Man 3 will deal with the fallout of this event while Doctor Strange 2 will mop it all up.

This is something the MCU has been doing more and more of and phase 4 and beyond seems to be doubling down on greater interconnectivity. Not just in the characters or the fact that it all plays out into the same world, but the movies leading directly into each other. With WandaVision, Spider-Man 3 and Doctor Strange 2 you have a nice little story-arc, a neat little trilogy. By weaving not only the movies but also the shows together, they can create multiple different smaller narratives running throughout.

So, to recap and make it a bit more clearer for everybody: the way I see the future of the MCU based on what we know now I think that there will be three types of continued narratives. The narrative that runs throughout each 'solo' movie and its sequels like the Iron Man trilogy. Narratives that run throughout a handful of movies and or shows from different characters like the Multiverse saga. Finally, the large and grand 'everything comes together' narrative like the Infinity stones storyline.

The whole Multiverse situation might also be used to bring in the X-Men and the Fantastic Four. Now that Feige has all of these toys in his toy-box, the discussion has shifted to how these characters will be integrated into the MCU. The X-Men especially are facing an uphill battle. Not only have the X-Men already have quite a few successful movies behind their belt with actors who have defined themselves in the roles. Hugh Jackman as Wolverine, Sir Ian McKellen as Magneto etc. Replacing those characters with different actors is going to be difficult in the public eye. Aside from that, the X-Men would have great difficulty fitting in the MCU as the tone is quite different. The X-Men have always been a stand-in for minorities and the discrimination they too often face. They're feared. Hated. This wouldn't gel well with the MCU where super-powered individuals like the Avengers are (generally speaking) lauded. This is a problem that even the comics have faced when bringing the Avengers and X-Men together. Fantastic Four has this problem on a lesser scale, which is why I believe Feige has decided to introduce them first. The Multiverse might solve most of these problems, but we'll just have to see.

The last point that I want to discuss before closing this post is the imminent arrival of the Young Avengers and the increase in diversity in the MCU. That last is something the movies have been lacking in, but Feige and his team have been working on to improve. Captain Marvel and especially Black Panther were the first big steps in this. The Young Avengers, which the MCU is clearly building up to at this point, is yet another step. Stature, the daughter of Scott Lang, has been featured in the MCU already and recently recast to an actress capable of handling action sequences. Kate Bishop will show up in the Hawkeye Disney+ show and Wiccan and Speed have already been teased in the WandaVision trailers.

With Ms Marvel and Iron Heart, it also seems that Feige is essentially merging the Young Avengers and Champions (both groups of teenage heroes) for the MCU.

Not only will the MCU get a whole slew of teenage heroes, but once with different backgrounds, ethnicities and sexualities. Hulking and Wiccan are Marvel's most famous LGBT couple and integral members of the YA, so you can be certain that they will show up and their relationship will be focused on.

That's (in a rather large nutshell I admit) how I think the future of the MCU is shaping up. More MCU content each year, with the number of movies that hit theatres increased and an entire slew of streaming shows hitting Disney+. All of these movies and shows will be connected much clearer, with different storylines running throughout. The Multiverse and the Young Avengers are just two examples of that. This integration is something I feel will continue on beyond phase 4, assuming that this model won't burn audiences out. The latter is a genuine concern of mine, though the fact that part of it is on Disney+ will hopefully help to prevent that. But in the end, we'll just have to wait and see if it all turns out.