Or: why Project Triangle Strategy is at the top of my most anticipated games. 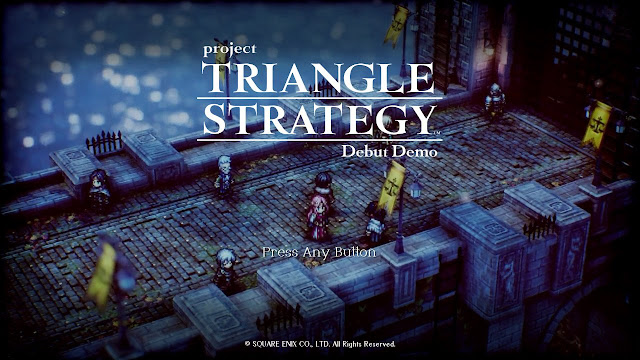 Well, here’s something I’ve been thinking about doing for a while. Back when the Pikmin 3 Deluxe demo was released I played through it and was thinking about writing down my experiences with it. You know, something akin to those impression videos you see online. I didn’t do it then because of time constraints and while it passed my mind a few times since then with other games, I didn’t act on it. Until now. Octopath Traveller is one of my favourite games of all time. Talking about the demo will not only give me the chance to talk about Project Triangle Strategy itself, but also gives me an opportunity to talk about some Octopath related stuff near the end as well.

So without further ado, let’s dive into this debut demo and see what it has to offer!

The demo drops you somewhere in the middle of the story of Project Triangle Strategy. The neighbouring Kingdom of Aerfrost has invaded, forcing prince Roland, his childhood friend Serenoa Wolffort and their allies to flee. They manage to make it to the House Wolffort's domain where they are met with a choice. Either hand over Prince Roland to Aerfrost, bend the knee if you will, but ensure the safety of those living in Wolffort’s domain. Or refuse, remain loyal to your king, but enter a full-out war with Aerfrost that will surely lead to countless deaths and tragedies. For a more in-depth explanation of the story and world of Project Triangle Strategy, I highly suggest you watch the announcement trailer but this is all you need to know for now.

It’s not the combat, however, that is what sets Project Triangle Strategy apart (aside from the graphics, that is). That’s the stuff that happens when you’re not in battle. When not in battle, you enter the exploration section. Think the monastery of Fire Emblem: Three Houses, but bigger. You’re not confined to just one location. Instead, in-between fights, you get the opportunity to explore your surroundings. In the case of this Demo, you get to explore a small bridge section and a small corner of House Wolffort’s Domain. Exploration is integral to the game, as this is where you get to let your inner-sleuth out and try to find information that you can use to change the path of the story.

On the continent of Norzelia where the game takes place, three convictions are held in high regard. Utility, Morality and Liberty. These three convictions are what makes up Serenoa’s world view and influence how the story will unfold. When faced with truly momentous decisions, multiple characters will weigh in by casting their votes on the Scales of Conviction. In these moments, the allies and decisions you make can determine the fate of whole nations and the continent itself. In short, this game has a story that unfolds in different ways based on the decision you make.

Let me give you an example of how this system works. In this demo, you need to decide if you surrender Prince Roland to Aerfrost or not. After the war council, the majority of the characters are in favour of handing the Prince over. They think that they don’t have the strength to take the Aerfrost army head-on. During the recess, you as Serenoa go into town to see what the people think. By talking to many different people, you can acquire information that you can not only use to make up your own mind, but also use to try and pursue the other characters to your side. For instance, one of the townfolks mentions that he has heard that the town has a secret weapon. With this information, you can persuade characters to fight Aerfrost by showing them that they have a bigger chance of victory then they initially thought. However, you don’t actually get to know if you successfully persuaded the character to your side. You only get to know that when the decision is made using this pretty nifty scales.

Now, that isn’t to say that Project Triangle Strategy’s combat doesn’t have some tricks up its sleeves. Which direction your units face in battle is an integral aspect of the gameplay. Depending on the position of the units, the damage dealt is different. When attacking from the back, you’ll always deal critical damage. When you attack an enemy while another unit is standing on the other side, that second unit will perform a backstab aka attack them as well. This way, you get to attack one enemy unit twice. Beware though: the enemy can and will use this strategy as well.

What Project Triangle Strategy also does different then what I’m used to with tactical RPG’s is the turn order. Instead of a concrete turn order in which you get the move all of your units in the same turn, the turn order of your units is based on their speed stat. You thus get a situation in which you move a unit, the enemy moves two units then you get to move four units etc. Not a big change and not necessarily something other tactical RPG’s haven’t done, but one that I find interesting regardless.

The demo's kinks and exploits

And that’s all she wrote. It’s a demo, after all, so while it’s a good way to get a taste of the game its nothing more than that. A taste. And a taste from a pie that hasn’t left the oven yet. As such, the roughly 5-hour long demo is still rough around the edges. When you enter an enemy’s line of vision, when they can attack you, the tile is purple instead of the usual blue. Blue and purple are colours that are very close to each other on the colour wheel. Distinguishing between them is thus very difficult, especially with the colour and texture of the terrain blow bleeding in. I spent quite some time fighting the camera as well. You can freely control it during both exploration and battle but it’s very finicky. I got the camera in some annoying positions that I couldn’t easily get out of as there’s no way to quickly reset it.

I also found an exploit in regards to enemy behaviour that brought me victory in the demo’s final battle. By setting an archer up in a position outside the enemy range, where the enemy couldn’t get to in the first place, I basically broke the battle from that point onwards. I thought that enemy archers would try and attack her using their bows or that the enemies would simply move out of range. None of that happened though. Instead, the last 10 turns or so was spent me snipping the final three enemy units, slowly chipping their health bar down to zero while they did absolutely nothing. Don’t get me wrong, I was happy to win the battle after spending the last few turns losing everything but that one unit but it is an exploit that I feel needs to be fixed for the main game nonetheless.

But that’s what’s this type of demo is for. To not only introduce players to the game and get them on board early on, but to gather feedback and use that to improve the overall experience. Square Enix had the same approach with Octopath Traveler and Bravely Default II and it worked out well there. I’ve no doubts that the final version of Project Triangle Strategy will be much smoother and improved then this debut demo.

All in all, I enjoyed the Project Triangle Strategy Demo. It’s far from what I expected from an Octopath Traveller sequel, but that’s not really correct now is it? I’ve been calling the game a spiritual sequel for a reason after all. It has the same font, same atmosphere, similar music and the same basic magic system (or so it seems anyway) from Octopath Traveller. It’s a game that could very well be set in the same world as Octopath Traveler, just a different part of it. I, for one, like to think that it is. However, it has very different gameplay and a story that it can call it's very own.

While I’m a bit disappointed that the game isn’t that close to Octopath, I do think that doing a spiritual sequel like this is a good call. I myself had been thinking about how I’d do a direct sequel to Octopath just after I finished that game. From focusing on 8 completely new travellers that have no connection to the original eight. From the eight being side-characters to a mix of old and new travellers. I stopped focusing on how I would tackle an Octopath Traveler sequel as I didn’t want to set myself up for disappointment. And I’m glad that I did.

With Bravely Default II launching this year, Square Enix would have had two very similar games released rather closely to one and the other. They’re using Octopath Traveler and its ‘2D-HD’ style to create an entire world of games. They’re not turning Octopath Traveler in a franchise, but 2D-HD RPG’s into one. They’ve even given 2D-HD its own logo.  This way, Square Enix can and hopefully will bring us a plethora of different experiences, all different kinds of RPG’s, that are still connected by their graphics and overall presentation.