How to continue the Drawn to Life series

The Drawn to Life series that could be... 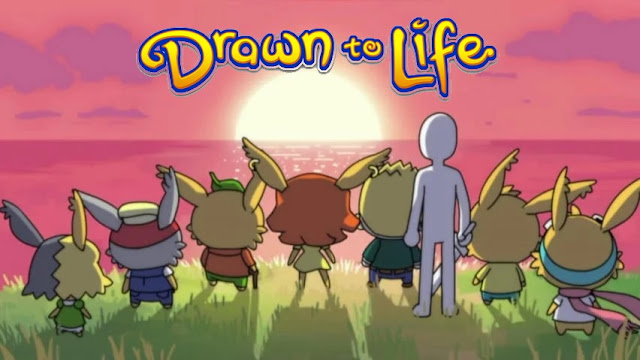 At the end of last year, something happened in the gaming world that I thought I would never see happening. A new entry in a childhood favourite game series of mine: Drawn to Life. The company behind the series had gone bankrupt years ago and I thus never expected to see a new Drawn to Life game again. But the folks over at 505 games acquired the rights to the Drawn to Life franchise (excluding the Spongebob spin-off) from THQ after their bankruptcy. I was delighted by the announcement of Two Realms (developed by Digital Continue) but, as you can read in my review of the game, I ended up disappointed in the final product.
My final verdict on the game pretty much matches does over other, more well-known and dare I say more professional review outlets in that regard. However, even if the final product didn’t live up to its potential doesn’t mean that I feel that 505 games and Digital Continue shouldn’t continue the Drawn to Life series. Two Realms has some very interesting ideas and a good enough foundation that I feel that there is a lot of potential for the next game in the series to be great. It could perhaps even the best Drawn to Life game in the series.
Let's dive in.

Rising from the ashes

A week or so before Two Realms came out Nintendoeverything interviewed Digital Continue founder and executive producer of the first two Drawn to Life games, Joseph Tringali. Two questions he was asked were “Do you think there’s any sort of possibility of bringing the previous Drawn to Life games to Switch?” and “What do you believe is the future of the Drawn to Life franchise?”. The answer to both questions can be summed up together. He would love to do both. He sees potential in both Switch ports of the original two games and in creating brand new tiles. It was one of his goals with Two Realms to set the stage for potential sequels.
However, all of these plans, in his words, depends 100% on there being a bid enough audience for it. In other words, it depends on how well Two Realms does. That’s something that we can’t really keep track off. We know that reviews are mixed, but in terms of how well it sold, we don’t know. That’s worrying, for more than one reason.

The first is of course that if the Two Realms didn’t perform well (enough) we won’t see anymore Drawn to Life in the future. Its resurrection would be short-lived. But that’s not the reason I want to discuss, it’s the other one. Not knowing how Two Realms has performed also means we don’t know what the distribution is between platforms. Two Realms came out for Nintendo Switch naturally but was also released on Steam, IOS and Android.
Why this worries me is that I’m afraid that if the mobile versions of the game sell significantly better then the console/PC version and that this will push the game into a bad direction. Two Realms already has systems included that feel ripe for monetization. The templates for your hero, the stickers for your hero the enemy placing mechanic during challenge levels… It doesn’t take a lot of imagination to see these turned in microtransactions and loot boxes. And that’s my worry. That high success in the mobile market will turn Drawn to Life into a mobile series, game design and predatory business practices and all.
Now, I do have to say that mobile games and liking to game on your phone or tablet is nothing wrong in and of itself, but I just don’t care for them myself. Especially, the microtransaction and loot boxes. Drawn to Life getting turned into a mobile-only franchise is thus something I fear.
But that’s not how it has to go. It could also go the other way: the Switch version outselling the mobile versions. Or at the very least: the versions doing on par with each other and 505 games and Digital Continue not going the mobile-only route. In that case, we could see a much more straightforward sequel. Well, I say ‘straightforward’ but that’s actually not the way I think the next Drawn to Life game should go. Two Realms has been made with passion, but I think a much bigger overhaul then a typical straightforward sequel gives is necessary. While the new ‘puzzle platform’ levels are interesting and can be fun, the Two Realm’s overreliance of them and the lack of variety makes them grow stale fast. The lacklustre story is also something that a sequel really needs to improve upon. Not to mention the low amount of actual drawing Two Realms had. The series is called DRAWN to Life. You should be able to draw stuff frequently have it actually be (semi-)relevant. The key question here is thus: how would I make a Drawn to Life sequel based on what we got? Well, I would move the series back to its root but still keep some of the elements of Two Realms.
The gameplay of the original Drawn to Life games on the DS was quite a bit different from what was in Two Realms. It’s much more standard platforming, a side scroller like the Mario series. Your adventure to different lands, like a winter wonderland, with several different levels (around 3) and a dedicated boss fight for each one of them. As I said, standard platforming fare.
The drawing was an integral part of the gameplay as, without it, you couldn’t traverse the levels. The stuff you drew weren’t just little, for the show only, nick nacks like in Two Realms. Those were still present though were still more important than those in Two Realms. They were oftentimes needed to improve Raposa Town and advance the plot. No, your drawings were actually part of the gameplay. You needed to draw platforms, often in the form of clouds and such, that would fill out the level and let you traverse it. And platforms are just one example. You had to draw weapons and tools as well, like a sci-fi gun and a sled which you would have to use in levels as well. This was always the most interesting way the drawing was used in my opinion. Creating your own Hero was, of course, the most fun aspect of the drawing and the one that I put the most time into, but these self-drawn platforms where always the most intuitive and made the drawing more than just a gimmick.

Yes, Two Realms gameplay is much more unique then this but I feel that the traditional side scroller style will fit the game better. Will attract more of a general audience and provide a much ‘sturdier’ backbone to the game. However, I would not completely throw out Two Realms puzzle-platform levels. I would keep them in there as challenge levels (like the ones in Two Realms) and throw them into the normal levels. What do I mean by that last one? Well, in the original game you could occasionally find something like a house in the level. You could enter these houses for some extra goodies.
I propose that when you enter such a house (or something similar to that) you enter one of Two Realms puzzle-platform levels. You could also put these levels right before the boss, like how in Super Mario Bros. you first have to make your way through the castle first. You could make it some sort of tower that strings along with the puzzle platform levels exactly like is done in Two Realms. If you do this, I feel like that would be a good mix of both gameplay styles as well as provide the player with some variety.
For the story, I also have an idea that mixes the old with the new. The first game was set in Raposa Town. The Next Chapter had you go to many different Raposa settlements with the big ‘it’s all just a kids coma dream’ reveal at the end. Two Realms continued on from this point and established the Raposa still existing in Mike’s subconscious. It had you jump from Raposa town to the real world and enter the minds of people to help them out with their problems.
I would take this concept a step further. Instead of the mind of the people having just straight up levels, you’ll have a group of people like Mike with all of them having a little world inside of their head. Unlike with Mike, these worlds won’t have the Raposa. For example, maybe there’s a guy who loves the sea and everything about it. His fantasy world is thus modelled after the sea, with fish-like inhabitants. You starting to see my intention? Instead of just the Raposa, you’ll have all kinds of different creatures inhabiting all kinds of different worlds. It doesn’t even have to be fantasy, you could also go the science-fiction route for even more variety. All of these worlds would function as their own little hub worlds, with a handful of levels each.
Lastly, I also want to briefly talk about those possible ports. I do think that it is a good idea to put the older games on the Switch (excluding the weird Wii one). Drawn to Life and Drawn to Life: the Next Chapter are two excellent games. Putting them on the Switch would give the franchise a quick boost without 505 games and Digital Continue having to do as much work for it. It’s a port after all. Sure, they need to put some extra work in and adjust the Draw Tool so it can work with the Joy-Con but that hardly the end of the world now is it? If they’re not certain if a brand new game would be worth the development time or if they don’t have the time for it right now but want to keep up the momentum, then these ports would be a good alternative.
..........
Those are my thoughts on the future of the Drawn to Life series. From what I consider to be the worst possible outcome, the mobile-only route, to the best, a combination of the old and new. Those are my thoughts if the series gets a continuation at all that is. Drawn to Life: Two Realms might not even do well enough for the series to continue. But that wouldn’t make for a good article, now would it?
Article Gaming Nintendo