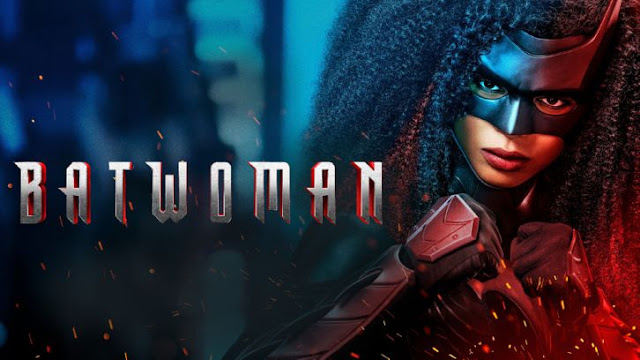 Since I figured out the trick of using a VPN to get into the CW TV website I can watch the CW shows that aren't on Dutch Netflix. Batwoman season 2 was the show I checked out first. The first season was that one Arrowverse show I couldn't watch and with the casting change, it was also a good moment to start this show without needing to watch that first outing. Now that the season is over, what did I think of it? Is Batwoman season 2 worth watching?I think it isn't a bad show like many like to scream, but it's not particularly great on either.
Let's dive in.

While returning on a trip from Metropolis the plane of Kate Kane, cousin of Bruce Wayne and secretly Batwoman explodes and crashes into the Gotham River. Kate's body isn't found but the bat suit is; by a homeless Ryan Wilder. She takes up the suit and the mantle of Batwoman and while the rest of the Bat-team, especially Luke, is initially hesitant she quickly makes the suit and the role her own. And it's good that she did because Gotham really needs a hero. Hush is impersonating Bruce Wayne with the intent to take of Wayne Enterprises, Kate's sister Alice is still on the loose, a drug epidemic is waging on the streets and the Crows are becoming more and more oppressive.

Let's be fair to the show and start off with what it does well. The performances of the cast, the individual character journeys, the set design and the show’s effort in putting in social and moral lessons. On the other, less favourable hand, the cast feels bloated, the overarching story is underwhelming, the low budget really hurts the show at moments and the social messages are told in a rather blunt way.

The strong performances of the cast were the very first thing I noticed watching this show. Javicia Leslie’s performance as Ryan Wilder was the standout initially. She had the difficult task of carrying the responsibility of taking over the show’s main focus from Ruby Rose’s Kate Kane and she does so admirably and successfully. She perfectly captures the vulnerable, determined, a little goofy and empowering character that is Ryan Wilder well and her emotional acting game is on point.

The more the season went on and the focus shifted away from establishing its new protagonist the rest of the cast got more time to shine and they did a really good job. Luke Fox felt very much side-lined for the majority of the season but once he got a meaty storyline of his own, Camrus Johnson brought his A-game and completely sold it. Yes, there are still plenty of recurring actors and guest stars that give less than convincing performances but from the main cast, there’s not much to complain about.

What I can and will complain about is the overall narrative and the poor balance of focus between the main characters. Similarly to what fellow Arrowverse show The Flash has been doing since season 6, Batwoman Season 2 splits its season up into two halves in regards to the big-bad. The first half of the season focuses on new character Safiyah while the second introduces the classic Batman B-villain Black Mask. Splitting the season’s narrative up like this is a good trend of the Arrowverse. It fixes a problem that has been creeping over time, gives the show more variety and allows it to course-correct more easily should that be necessary which was needed.

The first three episodes were strong but the more Safiyah came into the picture, the less interesting it became. Safiyah just isn’t interesting. She’s a wildly inconsistent character that constantly flip-flops on her relationship with the other characters for one. In short, she was a bore that weighed the entire showdown.

Black Mask is a much better villain. He’s entertaining thanks to his performer Peter Outerbridge clearly having an absolute blast portraying him, has more clear and understandable motives and is just more of a threat all around. There are still some problems with his story which I’ll get into just a bit in a section where it fits better, but overall the Black Mask storyline does its job and is pretty entertaining.

Even if most of the cast have interesting character journeys to go on, the execution of them is mixed. While I like the spot where nearly all characters ended up, the journeys to that point weren’t always satisfying. I feel that this is the fault of the size of the cast. There are just a few characters too many and this means that the show can’t give each character the time that they’re due. Some characters, like Jacob, really don´t feel like they belong on the show (anymore) and his presence takes away time that would’ve been better spent on other characters.

The show might fall short in the overall story and giving each character each due, there are still some very solid, fun and even awesome episodes amongst the lot. The opening three episodes form their own little, strong, opening story and the final manages to tie up the uneven season surprisingly well. When the show remembers that it is a superhero comic book show with all the trappings that come with like supervillains and secret identity shenanigans and with character work thrown in, that’s when the show is at its best. It results in its most memorable episodes which are why I hope Season 3 will have more of them than Season 2 had.

As it’s a CW show, Batwoman lacks the big-budget of competitive superhero shows and even fellow Arrowverse show Superman & Lois is co-funded by HBO Max. You can definitely feel this restricted budget creeping in at times but I have to praise the show in that, for around 80% of the time, they manage to make it work. Gotham is fairly well-realized and the big set pieces and fight sequences are a treat to watch. The smaller ones sprinkled in between aren’t that memorable in comparison, but they’re still well handled and the fight choreography remains strong whatever the scale.

And then, finally, there’s the Kate Kane of it all. Instead of killing her off, the show reintroduces her mid-way through the season brainwashed and with a new face. To be fair, Wallis Day’s performance is good and as a Kate Kane with a new face, I can buy it. However, I don’t like this decision at all because of the ‘tug of war’ it resulted in. The first half of the season already had Kate’s shadow heavily looming over it, hindering Ryan establishment. Ryan almost became second to Kate again and a ‘tug of war’ of sorts began with both the characters on the show and amongst the viewers between the two.

As only one character can be in the series Batwoman they split the viewer base of this already meandering show. When Kate´s story concluded in the final and got sent away (the producers have confirmed that this is indeed the end of her story) you ended up with a lot of people disappointed and even angered when Kate rode off into the sunset.

In short: the problem is that the show tried to have both their cake and eat it too and, in my opinion, it blew up in the show’s face.

I feel that I need to point out that while Batwoman Season 2 is a flawed show, but one that has gone far from where it started. I checked in every week to watch the new episode and, most of the time had fun even with its myriad of problems. On top of this, the show sets up for the 3rd season that has the potential to be better. Jakob and Kate won’t be returning which means that there will be more time for the rest of the cast to shine and Ryan will no longer be in Kate’s shadow. The final shot also teased the potential arrival of three classic Batman villains, the Penguin, the Mad Hatter and Poison Ivy which is very exciting. If you’re interested in Batwoman Season 2, I would recommend you give it a try.
Arrowverse Batgirl Batman DC Review TV/Movies