Review: Raya and the Last Dragon

There's an energy in the water. 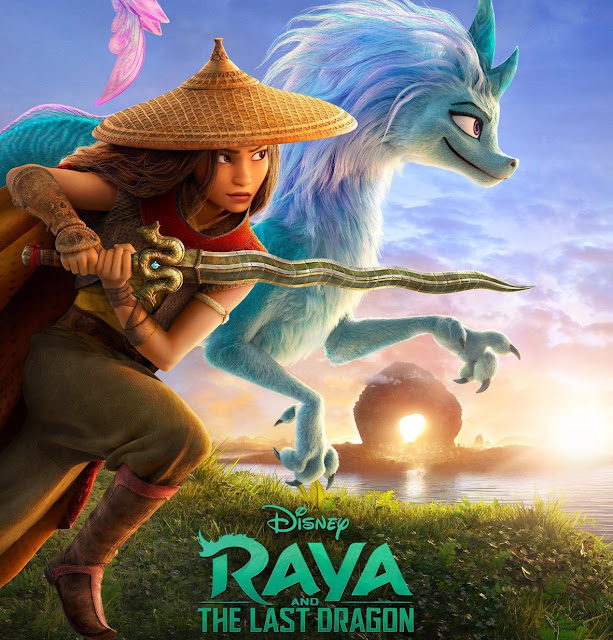 So, I finally got around to watching Disney’s latest animated feature: Raya and the Last Dragon. When the movie hit Disney+ without having to pay for it (30,- is way too much for a rental if you ask me) I booted it up, grabbed some popcorn and let the movie wash over me.With the pandemic and all that I didn’t really keep track of every movie that was coming out. I thus went in almost completely blind, knowing only that it was Southeast Asian inspired and had a dragon in it. And I liked it a lot.
Let´s dive in.

500 years ago the people of Kumandra were terrorized by the Druun, shadowy creatures that turned the people and dragons of the land into stone. The Druun were defeated when Sisu, the last dragon, focused her magic into a gem blasted the Druun away and brought everyone back but disappeared herself. Since then, Kumandra has fallen apart as the result of the people fighting over the Dragon Gem.

After Raya finally becomes a guardian of the Drago Gem her father, Chief Benja of the Heart tribe, invites the other tribes over for a feast firmly believing that the five tribes can be united again. During the feast, Raya makes friends Namaari, the daughter of the chieftess of one of the other tribes. Raya shows Namaari the Dragon Gem but Namaari betrays her and calls her people to the Gems’ location. In the chaos, the gem breaks and the Druun are released and turn many people, including Raya’s father, to stone.
Six years later, Raya finally manages to find Sisu after following an ancient legend. Together, the two set out to find all of the gem’s pieces, re-assemble it and save the world.

Let’s start with what is arguably the most important part of any movie. The story and characters. The narrative of the story is pretty good but basic and Disney tropes. It's really easy to see where the movie is going as it adheres to Disney’s standard formula pretty in a lot of areas, though not all of them. It’s what’s around this narrative structure that makes the story work. The world, the characters, the situation they find themselves in and the parts where it doesn't adhere to the Disney animated movie tropes.

What makes the characters stand to me is the way they subvert expectation. On the surface, the two main characters Raya and Sisu are very similar to other Disney characters. Raya, the determined and good-hearted protagonist but who is naïve, doesn’t truly know how the world works and overestimates her own abilities. Sisu, the being that people revere as wise and powerful but in actuality is a comedic screw-up.

Both are not true, however. Raya is far from naïve and an extremely capable warrior. Here character flaw is actually the exact opposites of most Disney Princesses. Where they are often overly trusting, she has serious trust issues which tie directly into the movie’s big theme and message. Sisu is a very comedic and eccentric character, yes, but just like Raya she’s genuinely capable and is wiser than even she thinks. The dynamic between these two is also very good, they’ve got good chemistry and it’s them that makes this movie’s big message.

The side characters are interesting as well, Maraani especially has many layers to her, but they don’t really get any time to shine. The movie is very much the Raya, Sisu and Maraani show. While I very much enjoy these character and their dynamic I am disappointed that the side characters don’t get much to do.

That’s where the biggest flaw of this movie comes into play. It’s pacing. The movie moves too fast in my opinion. The middle part feels rushed and the movie also ends a bit too abruptly. If it had 10 more minutes pr so of runtime, the movie would have had the opportunity to linger on some moments longer, its side characters would've been more memorable and the main message would’ve been clearer. The way it is now, the message is a bit muddled amongst the other elements of the movie.

Action sequences usually aren’t something that I remember from Disney movies, but I do this time. I think it’s because the studio stepped up its game in terms of fight choreography. It feels much more natural and the amazing animation helps here tremendously. It’s absolutely beautiful. From the designs of the characters and it’s creatures to the environment to the water. That last one is no joke, the water in this movie looks stunning. I have yet to see a movie where the facial features, the non-verbal features and the body language is so well done, so realistic. When Raya made a taunting face, ‘oh guess what’ face, I didn’t need to hear the voice acting to feel it, so to speak.

Said voice acting is very good. There´s not a bad performance or voices not matching the characters amongst the cast. The voice actors, especially Awkwafina as Sisu and Kelly Marie Tran as Raya, put a lot of emotion and nuance in their performance. The music is beautiful as well. It´s not as present in the movie, not having any musical numbers is partially responsible for this. When the music kicks into high gear, however, you get the full range of the soundtrack and it´s those tracks that stay with you.

Raya and the Last Dragon is a very good movie. It’s beautifully animated with very well-realized characters, amazing action and good messages. It has its flaws of course, like the main message getting a bit muddled and pacing that just a tad too fast but those aren’t deal-breakers by any stretch of the imagination. Raya and the Last Dragon is a movie worth watching and re-watching.

I do recommend you doing so in a movie theatre should this be a safe option for you. I do think it’s a movie that should really be watched in the theatre itself. From its first shot way up till the end, I could just feel that it was made for the big screen and watching it on the small screen lessens its impact. It doesn’t fully come to its rights and it will leave you with a better impression if you watch it in that setting.