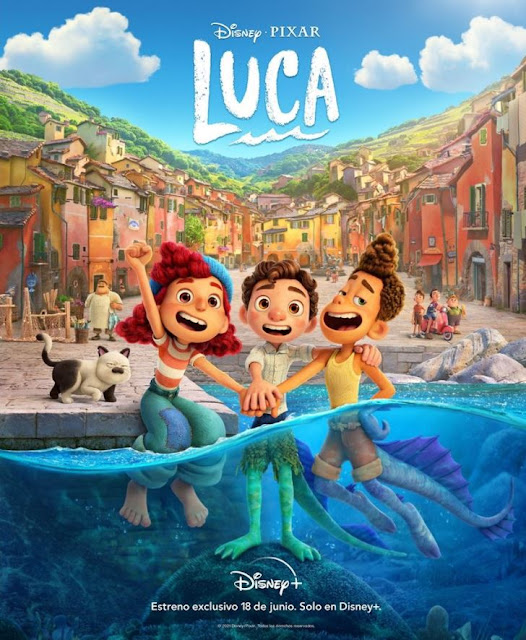 I had a lot of fun last week with viewing and reviewing Disney's Raya and the Last Dragon. I watched it twice and gave a thirst for more animated films and surprise, surprise: I didn't have to wait long for that thirst to be lessened. Pixar's Luca, a movie about a young sea monster going to the surface for the first time set in an Italian coast-city, is now streaming on Disney+ at no extra cost.
So, is Pixar's latest also its greatest? What are the strong and weak points?

Living in the coast of the Italian city Portorosso, little sea monster Luca Paguro lives with his family. He spends his days herding a school of fish and hiding from any human boats to sail upon the water’s surface. Luca, however, dreams of adventure so he can escape his boring life. One day, Luca meets Alberto Scorfano a fellow sea monster who has been on the surface many times. The two become fast friends, explore the abandoned little island Alberto lives on and dream of buying a Vespa so that they can travel around the world. When Luca’s parents find out Luca runs away with Alberto to Portorosso out of fear of being sent away to the deep.

In Portorosso, there they make friends with fellow ‘underdog’ Giulia Marcovaldo. The three enter the local triathlon so that Luca & Alberto get money to buy a Vespa and Giulia can beat the local bully Ercole Visconti. All the while, Luca & Alberto must keep their status as sea monsters a secret, avoid Luca’s parents and survive the conflict that’s brewing between them.

What stood out to me about this movie is how much smaller in scale it feels compared to fellow Pixar movies. It’s a trope of Pixar that they are movies that ‘make you cry’, hit you at your emotional core. The recent Soul, for example, struck a chord with me and made me tear up which I think it’ll do to most watchers. Luca isn’t like that. It’s not that it doesn’t have any strong emotional moments nor any good life lessons but, comparatively, they don’t hit as hard.

This all has to do with the type of themes and lessons the movie goes over as well as its smaller scale. The stakes are lower, the story is smaller and it focuses more on little kids where I feel that most Pixar movies have a good balance between lessons and themes for both. Said lessons are much more applicable to children and are rather standard within coming-of-age stories. The once for adults are far from subtle but that doesn't change the fact that the lessons taught here are good lessons and once lots of people can associate with.

The movie also does a good job of weaving the narrative into its themes and lessons. The sea monster aspect isn't just there to make this movie more unique, though it certainly helps in this department. It's an allegory, like many aspects of this film are. Seeing these allegories and how well they work makes me appreciate the movie more as well as shows its clever writing.

The smaller scale and lower stakes, alongside the very well realized Italian atmosphere through the world design and soundtrack, make this movie feel very charming. It’s fun to be in Portorosso together with these endearing characters. They are well-realized, have their own unique designs, personality and journey that sets them apart from each other and makes them memorable and endearing. My personal favourite wasn’t one of the three protagonists, Luca, Roberto and Giulia (who are still very endearing by the way) but Giulia’s father. He’s the perfect bland of a physically imposing, a sweetheart and good father who doesn’t let the fact that he was born with only one arm stand in his way.

The only character I wasn’t a fan of was the villain, Ercole. There’s just not much to him other than being a very typical bully who is a very stereotypical Hollywood portrayal of an Italian. He fits the story very well in the sense that he provides the perfect ‘normal’ foil to our trio, but I would have at least thought Pixar would’ve given him more depth. Since parentage is such a strong theme in the movie, I was expecting to find out his parents were going through/had gone through a bad divorce. Give him something relatable and contrast him with Giulia whose parents are also divorced, but amicably. But nope. He’s just a bad person and lacking as a character because of it.

Just like you´d expect from a Pixar film, the animation is gorgeous. There are moments where Luca goes into a dream sequence which are beautifully animated and really capture the imagination of a young boy. The design of the characters leans much more to the cartoony in comparison to let´s say, Soul, befitting of the movie´s tone and are very creative. The background work isn’t too shabby either. It really captures the beauty of a coastal Italian town. I’ve been to a few myself and Portorosso reminded me of them.

Pixar’s Luca is a good, enjoyable and above all else charming little coming-of-age story with sea monsters. The animation is beautiful, the characters are endearing and the atmosphere and soundtrack perfectly capture Italy. It’s not a tear-jerker like other Pixar movies and is clearly more a movie for kids than it is one for adults so the impact it’ll have on you may vary.

Even with its flaws, considering it’s free if you’ve got Disney+, there really is no reason not to check out Luca. Even if you won't walk away with that same lump in your throat most Pixar movies give you, you'll still walk away having enjoyed the movie.