Pokémon should've afforded the next generation of games more time in development. 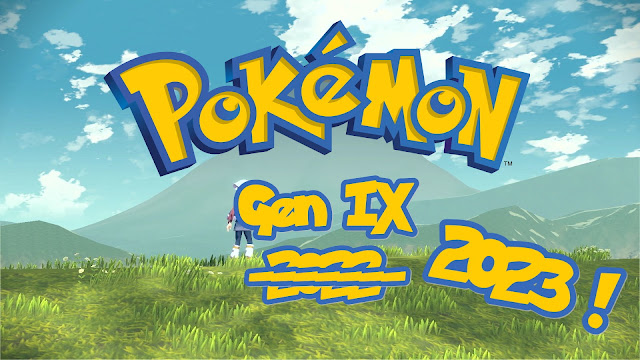 Ever since Pokémon released their games internationally on the same, they have launched in a pattern. Each new generation launches at the end of the year, around November, and last for three years. It's high time that Nintendo, Game Freak and Pokémon Company let go of this 3-year model and push the next set of titles to 2023.

And then Pokémon Scarlet & Violet were revealed and the point of this entire article became mute. Oh well. That just means that this article is now more about the reasons why I think that Pokémon needs to slow down. That and, well, I had to change a lot of sentences from future tense to past tense. Always fan.

My first argument is the start of the current generation of Pokémon: Sword & Shield. I enjoyed the games but it is quite clear to me that they were rushed. Weren't given enough time in the oven. Loads of elements, such as the graphics, wild area, story and yes, even Dexit, seems to be the result of not enough development time. The result of this rushed development is due to a variety of factors. Speculation, yes, but one with merit to it.

The team over at Game Freak, from what I've gathered, is an old fashioned developer. The development team is smaller than most without a lot of new blood. They're used to doing things a certain way and when they encounter a new situation, they tend to fall back on those established methods. The Switch is the first time the main team developed for a non-handheld console (partially at least) yet they still build it off of the 3DS engine. Why? I have the suspicion that they didn't really know how to work with the stronger hardware. This, in turn, lead to a game that didn't take advantage of the hardware it was on. Not much, at least.

If Sword & Shield could've used more development time, why didn't they delay the game then? That's where the multi-media aspect of the franchise comes in. If the big, next Pokémon game would be delayed it would cause a snowball effect that would trickle down the entire Pokémon machine. The videogames are the core of the franchise. When they come out, a new cycle of merchandising and media starts. Delaying the game would also mean delaying the entirety of the Pokémon machine, TCG, the anime etc, that's a costly measure.

That Game Freak will once again not have enough time to fine-tune the next titles as I feel happened with Sword & Shield, is my biggest worry. The still ongoing pandemic doesn't help much in that department. Gen IX could have even less development time than Sword & Shield with the games arriving while the pandemic has caused a lot of development troubles and delays.

Legends Arceus; the growth of the franchise

Releasing the next set of games at the end of this year also mean that Game Freak would only has a few months to see how Legends Arceus falls with the fans (so far, so good). See what worked, what didn't and what didn't.

Knowing GameFreak, I hardly doubt that they will heavily alter the core series games. Another criticism the series has received a lot in recent days is the crawling pace at which it grows and evolves. It took years before HM's were removed, for example. Yet, Legends Arceus is doing a lot of things differently and even I don't think Game Freak wouldn't at least carry over some elements in the next titles.

When I think about elements that can get carried over I think in the lines of what we got with the Let's Go games. Pokémon Let's Go Pikachu & Let's Go Eevee's roaming Pokémon wasn't something GameFreak meant to carry over to Sword & Shield. They weren't planning to incorporate the feature in the games but people likde it’s so much that they decided to carry it over. Something like the battles happening in the overworld is something I can see them carry over.

So, Wolf, you didn't want Gen IX in 2022. You didn't want the games to be rushed like Sword & Shield. Want enough time that GameFreak can incorporate some stuff that worked in Legends Arceus in the hopes that the games will be more innovative, has more growth, than usual.

To end this article, let's explore a question. Could Pokémon have delayed Gen IX to 2023?

As I stated earlier, Sword & Shield couldn't be delayed because of a snowball effect with the rest of the multi-media machine. Looking at that machine, it seems like the Pokémon Company has built in some safeguards. The Pokémon anime doesn't follow Ash anymore while he travels through the new region, collecting 8 gym badges etc. Instead, Ash and co-protagonist Goh as research fellows, travelling around the world while trying to win The World Coronation series and catch all Pokémon respectively. A run that's light on the overall narrative and high on one-off episodes. If they extended the current run by a handful of outings, no one would notice.

New Pokémon is the biggest boon for merchandise. Everybody loves new Pokémon and this leads to a boom in merchandising. Plushies, new TCG sets etc. With expansion passes for the games, the Pokémon company don't have to rely on the big-boom of a new generation anymore to get a merchandise refresh.

Speaking of Expansion Passes and DLC, that would be the perfect way to fill out the rest of 2022 for Pokémon. Legends Arceus launches early in the year and, assuming the gen IX games will launch in their usual November slot, which would mean no big new Pokémon game for over a year. Giving Legends Arceus an expansion pass ALA Sword & Shield would fill the year out nicely. They could also release a new spin-off game but I think that's unlikelier. Developing DLC is easier than setting up an entirely new game, especially under current conditions.

So yes, theoretically, Pokémon could've extended the current generation of Pokémon without much fuzz. By Giratina, we even see fans now lament the fact that the announcement of Scarlet & Violet cut Legends: Arceus' momentum. A lot of people would've been perfectly fine with DLC for that game to fill out the year.