Going Rabbid with blasters in the jungle. 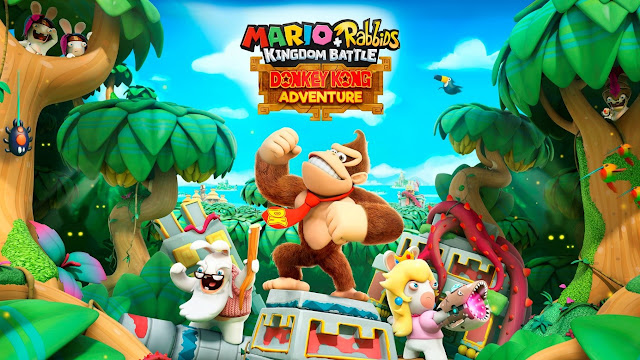 Earlier in the year, I reviewed Mario + Rabbids: Kingdom Battle, the Ubisoft developed crossover between the Mario and Rabbids franchises from way back in 2017. In that review, which you can read by clicking the link, I alluded to the Donkey Kong cantered expansion but did not cover it. I wanted to focus that review purely on the base game and give the expansion its own due later down the line. Well, that 'later down the line' means now. I picked the game up again, played through the expansion over the course of a week or so and am now reviewing. Is this expansion worth your time and money? What, if anything, does it bring to the table?
Let's dive in.

In Donkey Kong Adventure, a scared Rabbid Kong causes the Time Washing Machine to malfunction stranding him, Rabbid Peach, Beep-O and a bunch of Rabbids on an island in a different universe. The Time Washing Machine is broken, with its many components having been scattered all across the island. Worse, Rabbid Kong has come into possession of Banana's infused with the Time Wash Machine and used them to take over the island. He also none too happy with Rabbid Peach. Getting thrown off a tower by her doesn't sit well with him. Luckily for heroes, this island turns out to be none other than Donkey Kong's island with Donkey Kong himself, as well as a Rabbid version of Cranky Kong, ready to help.

I think the best way to describe the expansion is 'Mario + Rabbids: Kingdom Battle 1.5'. As you might have already suspected, the Donkey Kong Adventure expansion is essentially just a continuation of the main game, both in gameplay and story. The game is a turn-based tactical RPG. The battles are conducted on a grid in which the player and the enemy alternate taking turns. Each of the three playable characters (Donkey Kong, Rabbid Peach and Rabbid Cranky Kong) all have different types of weapons, movement and abilities. The combination of weaponry, abilities and passive perks is what makes each character unique. While it's mostly the same as the base game, there are some nice improvements in the expansion. Both Donkey Kong and Rabbid Cranky Kong have new skills that make them play differently from the other characters. Donkey Kong has, for example, the ability to pick up and throw certain objects and enemies and throw them across the battlefield. Some other very welcoming changes are weapons with buffs against a certain type of enemies and more varied battle objectives.

As the expansion is built on the game's original engine, the graphics and such are exactly the same. There are new models for Donkey Kong, Rabbid Cranky Kong and the like but that's about it in that department. The environment is, of course, brand-new, an island with a lush Jungle and ruins placed within it and looks just as stunning as the environments of the main game. The soundtrack is once again provided by former Rare composer Grant Kirkhope and is once again stellar.

To get into some criticisms of the expansion, the interface itself has, sadly, not changed. I had quite a few issues with Mario + Rabbids interface (it was too limiting and I miss-clicked a lot) and all of those problems are still present here. Another critique I have with the expansion is that I feel that 3 playable characters are just one too few. On the plus side, you can keep building your characters up and dive deep into the general strategy the characters give. On the downside, there really isn't much variation to be found. The amount of strategies you can get into with these three characters is limited. One more character, like Diddy Kong, for example, would have spiced things up a bit. Give way to some more varied strategies as well as some more variation for potential replays.

Potential replays or the challenge mode. While the expansion's story itself is only around 10 hours long, a good length for what you get I feel, there are some extra things for you to do. Just like the main game, there is a challenge mode that keeps you busy for a while. There are also a bunch of collectables like 3D models and Puzzle pieces and secret areas to be found. Nothing too fancy, but enough to distract you for a time and/or to keep you busy for a while after finishing the story.

Mario + Rabbids: Kingdom Battle: Donkey Kong Adventure is quite good. It builds on the base game with some nice improvements as well as featuring its own fun story with Donkey Kong. Even if you find the roughly 10-hour long campaign a bit on the short side, there is some extra content here four you to dig your teeth in. There are some problems, as always, but these are really very minor things in the grand scheme of things. If you liked the Mario + Rabbids: Kingdom Battle, the Donkey Kong Adventure expansion is definitely worth your time and money.