How Marvel's once oh so promising line came to its end. 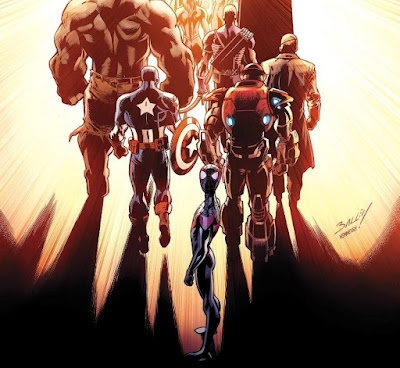 At the beginning of the decade, Marvel was in trouble. Their comics did not sell as well and the company was nearly bankrupt. After getting bought by a duo of businessmen, the company launched a new series of comics to get them out of their troubles. New hire Bill Jemas thought that the problem Marvel had was that they were "publishing stories that were all but impossible for teens to read — and unaffordable, to boot". As I discussed last week in 'Let's Talk About Marvel's Ultimate comics line: the Golden Years', the line that came from all of this was the Ultimate comics, which worked wonders. Marvel was 4-for-4 with its new imprint. Jemas approach had worked and his rebooted and reimagined characters quickly overtook the popularity of their traditional counterparts. The books were selling very well and getting lots of praise all around. There were heavy rumours amongst fans and creators alike that with the success of the Ultimate line, the original line of Marvel comics would slowly but surely be phased out.

However, things were far from perfect. From day one, there were some issues behind the scenes. During the first few years, these issues did not have any negative impact on the Ultimate line as you have read. With time though, these issues only became greater and are what eventually caused the line's downfall. Most people point to two major factors that lead to the decline of the Ultimate imprint. I would personally argue that were four.

Let's dive in and take a look at them in the order in which they became problematic.

First off, there's Bill Jemas himself. The then-popular Ultimate line was his creation you could argue that was his only success. Other projects he launched like the Marvel MAX series did not achieve (that same level of) praise. The complete opposite event: his management of Marvel lead to multiple potentially lucrative deals to pop. A Nick Fury solo movie with none other than superstar George Clooney in a producing and leading-role. Yeah. That one hurt especially bad. Aside from that, Jemas was not very well-liked within Marvel. He was a controversial figure whose aggressive micromanagement and 'bad-cop' attitude caused problems with his employees and external parties. He also used company money and assets to fight out a personal grudge he had with Quesada, leading to the 'U-decide' initiative and the creation of Marville.

I could go on and on about the grudge that developed between the two for another few paragraphs, but I digress. However, I will refer you to the excellent comic book review show 'Atop the Fourth Wall'. It's host, Lewis Lovhaug AKA Linkara, has done multiple videos on the subject and done an excellent on both explaining the situation as well as deconstructing the work that came of it. I highly recommend checking out his work out. After you've finished reading this post, of course.

In 2004, enough was enough and Jemas was let go. At the same time, Millar and Hitch left the Ultimates after the conclusion of the books second volume, Ultimates 2, a result of problem numero duo. Due to the geographical and time-zone differences between Millar in Scotland and Brian Michael Bendis and Marvel in US Oregon, co-operation was rather difficult. This had worked during the early stage of the imprint, when management was not as complicated but ran into multiple problems when the line grew in size.

Ultimate Fantastic Four for example, saw a slow but steady decline in overall quality due to the problems in communication between Bendis and Millar. The different writing styles of the two was another reason for this decline, but I'll get to that later. The complexity that a 'blockbuster comic' such as the Ultimates brought with it and the high work-load Millar was given resulted in Ultimates 2 suffering numerous delays. The 12/13-issue series was released over almost two years, from 2005 to 2007. Not ideal.

The big head at Marvel, Perlmutter and … themselves, tasked new-hire and award-winning writer Jeph Loeb with writing Ultimates 3. Loeb, most well-known for Batman: The Long Halloween had just ended his long tenure at DC comics. Management hoped that putting his name on Ultimates 3 would smooth over some of the ill-well Ultimates 2 heavy delays caused with fans. To bridge the gap between Ultimates 2 and 3, Marvel also hired Sci-fi writer Orson Scott Car (from the Valeria series) for an Ultimate Iron Man mini-series.

Both Ultimate Iron Man and Ultimates 3 did not do so well. Both books were critical and commercial disappointments. The problem with Ultimate Iron Man was it's extremely farfetched, border-line nonsensical even, story ass well as the books poor pacing. Orson being a raging homophobe did not do the book any favours either. Again, check out Atop the Fourths Wall review/deconstruction on the mini-series opening issues for an excellent deep-dive into the book's failings. Loeb's Ultimates 3 on the other hand failed largely due to imprint third and fourth problems. Millars writing style is in stark contrast to that of Bendis's.

As Bendis himself put it (and I'm paraphrasing here): 'I write about hope, Millar about nihilism. Even when he thinks he isn't, he is'. While Loeb tried to imitate Millar's dark edge and political intrigue he failed to live up to it. It was a divisive series with an overreliance on violence, death and shock value. It had some elements, most infamously the 'reimagined' relationship between the siblings Quicksilver and Scarlet Witch. That one was seemingly straight out of George R.R. Martins 'A Song of Ice and Fire'. Pretty sure I don't have to go into more detail than that for you to understand what I'm talking about.

The difference in writing styles caused a pretty stark contrast, a divide, to occur within the universe. You've got Bendis and Spider-Man on one side, all about hope and a better tomorrow, while you got Millar and his Ultimates and X-men on the other side with the dark side of humanity. Fantastic Four was the one book that, due it being co-written by the two, dangling in the middle. It combined the two tones and while this worked for a time, it was a large factor in that books eventual decline. It became difficult to keep the universe consistent with these styles. Switching between the two tones was jarring for many fans. It would all come to a head with the cross-over series 'Ultimatum'.

As popularity behind the Ultimate imprint started to decline in the mid-2000s, Marvel decided to some drastic. A large event that would shake up the series and the change the status quote. They leveraged the Ultimates unique place within Marvel to make it something that could never be done with the Marvel comics proper: killing many of their heroes. Ultimatum was meant as a reboot of sorts. The idea behind this was that with many of the iconic heroes gone, they could write brand new stories that were never seen before. It would also fix some of the imprints other problems like the aforementioned tonal differences. While Ultimatum's first issue topped the sale's chart, by the end of it, it had lost over a quarter of its readers.

Critically, it did even worse. Ultimatum got panned by basically everybody, from news outlets to critics to fans. It was described as 'soulless' and 'violence for violence'. The over 30 heroes that were killed off, most of them in exceptionally brutal fashion, did not sit well with fans and made them question the future of the Ultimate line. It compounded all of the problems that the imprint suffered from up to that point. Ultimatum didn't only sink itself but negatively impacted the entire Ultimate line. Sales dropped by a solid margin and not even the still excellent Ultimate Spider-Man escaped from it.

Looking back, Ultimatum was no doubt the beginning of the end for the Ultimate comics. It wasn't THE end. After the event, which saw both the Fantastic Four and X-men disband, Brian Michael Bendis and many others started writing stories in this new status quo. We saw the rise of the new Wolverine, Jimmy Hudson, as well as Reed Richard's de-evolution into the mad supervillain 'the Maker'. Stories with interesting, never-before-seen premises. Good stories that, sadly, didn't manage to draw in a large crowd. Many new books were launched but did not last long. Even with the effort the creators were putting into their books, the Ultimate line started to slowly fade away.

That was, until one particular storyline swung into the pages of Ultimate Comics: the death of Peter Parker. Brian Michael Bendis, in a discussion with some friends, had heard that statistically speaking, Spider-Man would look quite different in the modern age. In the 1960s, a poor-kid from Queens would be Caucasian but in the 2000's he would most likely be a kid from colour. This stuck in Bendis's mind and he eventually came to the decision to end his run on Peter Parker (which he was already contemplating) and replace him with a new Spider-Man.

The death of Spider-Man was the Ultimate line's last, massive storyline. The death of Spider-Man was a big deal for the company with even mainstream media picking up on the storyline. Admittedly, this was in large part due to them not understanding the difference between 'normal' Marvel and 'Ulitmate' Marvel, but still. It put the spotlight back on the imprint and give it a surge in popularity.

The rise of Miles Morales, after Peter had died, thus had all eyes on it. There was a lot of backlash against his introduction, mainly for being an African-American character. I could, one day might even, write an entire article about Miles but I digress. What's important is that this controversy didn't last long. Miles Morales grew more popular by the day and you can see what that has led to. The Oscar-winning Spider-Man: Into the Spiderverse movie as well as the Miles-Morales: Spider-Man videogame. In today's superhero landscape, Miles Morales cannot be ignored.

However, its legacy still lives on today. Miles Morales is still around, of course, swinging higher than ever, and elements such as an African-American Nick Fury were carried over the regular Marvel Comics as well. Arguably the biggest influence the Ultimate comics had, aside from Miles, is in the MCU. Many, many elements of the biggest movie franchise in the world are taken from the Ultimate line. Nick Fury pops up here yet again, but you also have the Avengers connection to S.H.I.E.L.D., Tony Stark's personality, costumes and much, much more. The MCU would have looked very different if it were not for the Ultimate imprint.

While these days, the Ultimate line is remembered more for where it ended up, all of the unnecessary violence, Ultimatum etc., it was much more than that. It helped make Marvel comics and their characters popular again after years of financial struggle. It brought many new faces and ideas to the company that are still with it today and have helped mould Marvel in what it is today. While I, for one, could have definitely go without the lines lows I'm still glad it existed. And who knows, we might even get something like it again in the future. The idea of either Marvel or DC launching a second universe alongside their traditional one still has a lot of appeals. With DC's Future State initiative, we might just see it again soon.