The Switch's place among the PS5 & XBOX series X

The future of Nintendo's hybrid console. 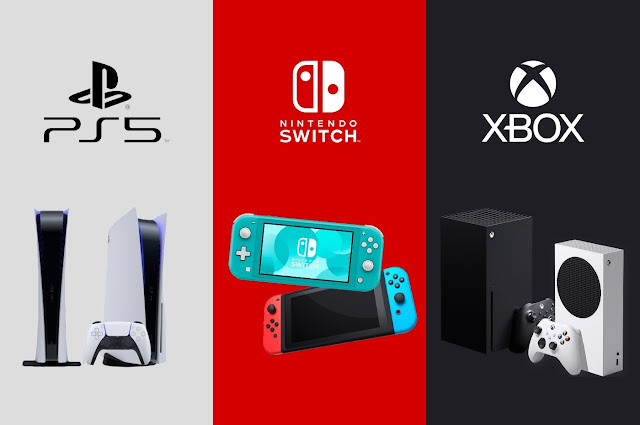 We're now in December and both the Xbox Series X and PS5 have officially launched. They're not easy to get your hands on, especially the PS5, but they are out regardless. The gaming communities attention is, naturally, all on these two new systems but I'd actually like to talk about the Nintendo Switch. This primarily a Nintendo blog when it comes to gaming after all. With the two new consoles now out on the market, a question that has arisen here or there is how they will influence the Nintendo Switch. Nintendo has always done its own thing, for better or for worse, then it's two main competitors. This makes predicting what they will do and how industry developments affect them a bit harder, but also a lot more fun as well. There are a few routes Nintendo could take to remain competitive with the much, much more powerful next-gen consoles. I've got three of those here that I want to discuss in a bit more detail.

Without further ado, let's dive in.

The position of Nintendo and the importance of the Holiday season

First and foremost, we must discuss the Switch's current place. The Nintendo Switch console is quite unique with it being a hybrid system and all. It's can be used as both a home console attached to your big TV as well as a handheld that you can bring with you on the go. All with the exact same library of games and without the compromises previous handheld versions of games had. You also have the Nintendo Switch Lite, a cheaper and smaller but sturdier built Switch that's handheld only. This unique approach, alongside a strong library of games like The Legend of Zelda: Breath of the Wild and Animal Crossing: New Horizons is what has made the Switch a runaway success. It has repeatedly broken sales records (bestselling console of the month, bestselling console at launch etc.) and the sales of the console are still really good month to month. There were some serious stock issues at the beginning of the year but those have been resolved these days.
That actually transitions neatly in the very first point I want to get into the upcoming Holiday season. The reason why Microsoft and Sony launched their new consoles in November is that they would be ready for the Holiday season. Traditionally speaking, the Holiday season is these companies most profitable quarter. I mean, it's the Holiday season. Everybody is going out to buy gifts for friends and family. Basically, every type of store and company have higher sales. Sony and Microsoft are of course hoping that there will be many PS5's and Xbox's under people's tree this year, alongside a few games of course. For their console to become 'the' Holiday gift and all of the benefits that bring. The thing is though, it's actually the Nintendo Switch that will most likely be 'the' gaming Holiday gift this year. Both Xbox Series X and PS5 are suffering from production shortages. Thanks to in no small part due to the Covid-19 Pandemic, there were fewer Xbox Series X and PS5 units produced. Couple that with the launch being all digital due to social distancing and how busy the postal services are these days and well… You got people still frantically trying to get their hands on the console weeks later and consoles getting "lost" (AKA stolen) during shipping.

The Switch doesn't have many of these problems. The shortage problem has been resolved and it's not that hot of an item that it risks getting stolen. Lastly, if you upscale the sold units from this year to what it could be during the holidays (based on its previous holiday performance) it would easily outsell the other two consoles. We'll just have to wait and see if this projection comes true or not but I would find it remarkable if that ends up happening.

What also sets the Switch apart from the competition is, of course, its hybrid nature as well as its library of games. That you can bring it on the go is still a big selling point, even if the novelty of the concept has worn off a little by now. The Switch is also supported has a strong library of games. A benefit Nintendo has such a strong first-party titles. Games that you can only play on a Nintendo console like Mario and Zelda. Due to this, a Nintendo console has for years been a console that many have 'to the side'. They have an Xbox or PlayStation and then also a Nintendo console for handheld gaming and/or for those exclusive games. The cheaper price of the hardware will also help a great deal to set the Switch apart. A proper next-gen console will cost you 500 bucks while the Nintendo Switch is only 300 bucks. For people who don't have a lot of money to spend, and for parents looking for a present for their kid(s), this lower price is very appealing. Not only the hardware but also the software will (most likely) be cheaper. Due to a multitude of factors such as rising production costs, the RSP (the suggested retail price) for PS5 and Xbox series X games are around 80 bucks. Those for the Nintendo Switch are 60 bucks. If they keep their price like this, it means that they will have yet another benefit over their competitors.

Now that I've discussed everything that sets the Nintendo Switch apart from the PS5 and Xbox series X, let's get into some of those potential strategies Nintendo could follow. I see three paths forward. Nintendo keeps doing what's it doing now, it follows the trend the other game consoles have said or do something completely different.

Simply staying the course is the most simple one. Bank on the current demand of the console, it's exclusive library of games and is status as a family-friendly console to keep filling a niche that the PS5 and Xbox Series X don't. The Switch is already doing quite well. While the new PS5 and Xbox Series X will definitely cause sales to drop a little, that won't suddenly make the Switch unsellable. The strong first-party games will also keep being a strong selling point of course. With how the PS5 and Xbox Series X are kind of lacking strong first-party games, for the time being, that's also something the Switch has going for it at the moment.

That's an option I honestly don't really see happening for the simple reason I don't see Nintendo sitting on their laurels. It's more likely Nintendo has some strategy to keep up with Sony and Microsoft. And that's where our second option rears its head. There have been many rumours floating around lately regarding an upgrade Switch model, a 'Switch Pro' if you will. Nintendo has had some updated console models before, the Nintendo DSi and the New Nintendo 3DS for instance, so an upgraded Switch isn't too farfetched of an idea. What makes me put this option squarely under 'Nintendo does what the rest do' is because if the rumours are to be believed, the better Switch will be more akin to the PS4 Pro and Xbox One X then the aforementioned consoles. Nintendo has, allegedly, asked their game developers to make their games 4K ready. There are also reports Nintendo has had visits/discussions with companies producing much stronger chips as well as manufactures of LED screens. This all points towards a Switch that's a considerable upgrade over the original model and would be more on par with the PS4 and Xbox One when it comes to its capabilities.

An upgraded Switch model is the most likely of the three options if you ask me. It's something they've done before, would put gamer's attention back on the console and could lengthen the systems life-cycle. It would also do wonders when it comes to third-party support, something the company has historically speaking struggled with. The lower power of the Switch compared to its competitors have made porting of these titles difficult. They often have to make sacrifices like in reduced graphics or cut content. A more powerful Switch would mean that there is more potential for these third party games to come to the system.

Lastly, Nintendo might have something up its sleeve that we know nothing about at the moment. Nintendo is known for being unpredictable, for doing 'weird' things and testing out new ideas. They might have something cooking up that will give the Switch some extra gas in the tank. Maybe something VR related? Something to leverage the increase in (the success of) Indie titles? Who knows but it's definitely a concrete possibility.
...........

With the Xbox Series X and the PlayStation 5 now out, the position of the Switch is about the change. Due to stock issues and a lack of any true system sellers for the new consoles, the Switch will most likely still have a few months of strong sales ahead of it before those consoles will overtake it. After that, we'll just have to wait and see. One thing is certain though: the Switch has been a strong seller throughout its life. Nintendo is not just going to roll over for the PS5 and Xbox Series X. They'll definitely have some sort of plan for 2021 and beyond. If that is just staying the same general course, a 'Switch Pro' or something completely different.

Whatever ends up happening, I'm confident that the Nintendo Switch will wither the storm of the new console generation and keep being a strong player within the gaming industry.