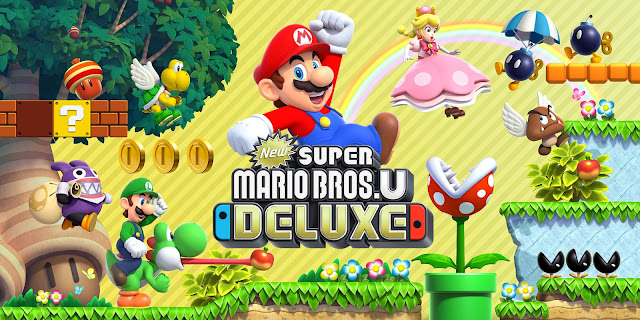 The story of New Super Mario Bros. U Deluxe is the same as it has always been for 2D Mario games. Bowsers kidnaps Peach, Mario goes to free her and of story. Alright, alright this game does put a little spin on it. Instead of taking Peach away, Bowsers throws Mario, Luigi, Toad & Toadette out of the castle. You don’t play a Mario game for its story so while I can complain about the barebones, story I won’t. It serves its purpose well and the opening animation is pleasant to look at.

What this game is really about is the gameplay, which this game does near perfectly. You run and jump across the levels all the while stomping on enemies, collecting coins and breaking boxes. The basic formula that has been there from day one is still as enjoyable and, dare I say, addictive as ever. New Super Mario Bros. U Deluxe does do anything to shake up the formula, but years of Nintendo working on it has nearly perfected it.

The controls are tight and responsive and combined with the extra tricks that the New Super Mario Bros. series added in, like the triple jump, makes the simple act of playing the game an absolute delight. Not everything in terms of the controls are perfect though. The newly introduced spin that allows Mario some extra height and air-time is good to have, but button mapping causes some problems. It’s activated by either pressing the R or B button when you’re in the air, but the latter causes some problems. You see, you also press the B button for a second time when you want to get some extra height after stomping on an enemy. Because of this, you can find yourself accidentally spinning when you wanted to stomp or vice versa which is as annoying as it sounds. Prepare for that mistake to cost you lives!

The same general mentality as the gameplay goes for the level design. It doesn’t reinvent the wheel but nearly perfects what has been there for years. It visually not different at all from what came before, with only a small handful of levels switching up the visual style. The design philosophy behind the levels also haven’t changed but again, they are expertly crafted. It’s not very difficult at all to see what you have to do to get to the end or to get the stair coins. It’s all about finding a way to get there and learn the skills to do so. It’s good, fun stuff.

The only difference that I noticed compared to the other Super Mario Bros. game I played, Super Mario Bros. Deluxe, it does allow you to backtrack through each level, which is appreciated. That and the map of the game is, for the very first time, interconnected. It’s no longer Mario getting shot from one world to the next over a loading screen, but you simply walk right over. A neat addition, though far from ground-breaking.

Just like always, New Super Mario Bros. Deluxe has a plethora of power-ups for you to use. From the traditional fire flower and star to the newly introduced flying squirrel suit. The latter lets Mario and the gang glide through the air, get an extra ‘jump’ and stick to walls which are all pretty useful. These power-ups have always been a mix of always useful and situational and that’s still the same here. The fire and ice flower function very similarly with each having its own benefits and drawbacks that give wait behind choosing which one to use and the flying squirrel suit are always useful. The rest though are very situational and only really pop up three or four times across the adventure. Still, the balance isn’t too bad and they are all still fun to use. Yoshi also makes his return, functioning the same as always, with three baby Yoshi’s in tow. These baby Yoshi have their own use but are pretty underutilized, sadly.

The power-ups are also where the Deluxe’ package new additions come in. Toadette has been introduced as a new playable character alongside Mario, Luigi and (Blue & Gold) Toad as well as Nabbit. Toadette is positioned as the ‘easy’ mode solely because she has her own unique power-up, the Super Crown, that transforms her into Peachette.

Peachette is a souped-up version of the flying squirrel suit, with higher jumps and longer floating time. Even so, Peachette is a lot of fun to use thanks to her personality and is a good pick for young or inexperienced players. If you still struggle with the levels as Peachette, you can always go for Nabbit who takes no damage or let the level be auto-completed for you. These two are very useful for little children making sure that even they can finish and enjoy the game.

If normal side-scrolling Mario doesn’t do it for you, New Super Mario Bros. Deluxe has some extra modes. There’s a challenge mode in which players must complete a given objective on a given stage, some within a specific time limit. In Boost Rush Mode, you have to reach the end of a handful of stages in the lowest possible time while in Coin Battle you compete for who can get the most coins. The New Super Luigi U expansion is included in the package which features redesigned levels that are harder, but shorter. It’s quite a good and beefy experience and one that I might take a separate look at in the future. These extra modes are all well-made, fun and definitely worth your time.

New Super Mario Bros. U Deluxe is, without a doubt, an excellent game. It might just be a souped-up port of the original Wii U version with some extra bells and whistles but that doesn’t mean the game isn’t any good. On the contrary, it’s quite excellent. It looks great, it sounds great and the decades of experience Nintendo has with Mario has been put to good use. Many elements have been (nearly) perfected which put this game at the top of side-scrolling Mario’s. Yes, it doesn’t really stray from the established formula at all and this undoubtedly does lessen the game’s impact for those more familiar with the series. Regardless, the game is excellent and if you want a good 2D side-scrolling Mario adventure to play then you can’t go wrong with New Super Mario Bros. U Deluxe.
Game Reviews Gaming Mario Nintendo Review