Let’s Talk About the Arrowverse; the first half of 2021

The Arrowverse is nearing a make or break moment. Which one it’ll be is up in the air. 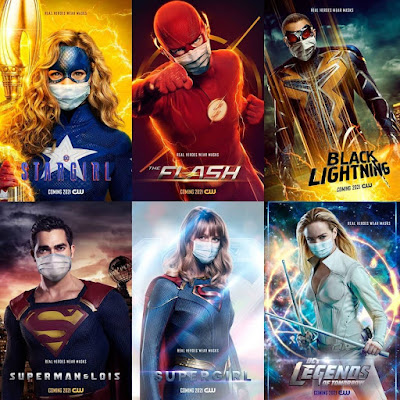 It’s that time again: the time I feel liking talking about DC’s little universe of superhero shows over at The CW. The last time I jumped into the Arrowverse was back in February when I gave my thoughts on the first three episodes of Batwoman Season 2 with the lead change and all. Now though, I’ll be discussing the entire slate of shows of the current season. Why? Because quite frankly, I feel that the Arrowverse is nearing a point at which it’ll either sink or swim. Let’s dive in.

Let’s start with the bad. The viewership isn’t anything to really write home about. Thanks to the website TV Series Finale which keeps track of the viewership and the demo, we can see that Arrowverse shows have been lower across the board this season. Batwoman has it the worst. Viewership of season 2 is down by 45% compared to last season. Basically, its audience has halved. Even The Flash, the CW’s steady workhorse for years now, can’t even crack the million mark anymore averaging 0.958 Million viewers.

The potential reasons for this are plentiful. In the case of Batwoman, it could be because of the aforementioned lead-change. While Javicia Leslie’s Ryan Wilder has been received well by critics and viewers there are no doubt people who were only watching the show for Kate Kane. That there are viewers who just didn’t think giving the season another shot was worth it. The pandemic has, of course, also influenced the viewership. Nailing the pandemic’s specific effects down is difficult but for starters, the seasons all started around 3 months later than usual because of it. There is a change that many people haven’t watched the current seasons yet because during long wait they simply forgot to check back. That they found other shows to fill their nights with.

The pandemic is also affecting the flow of each season. The current season of each show is, essentially, chopped up due to infections forcing production halts. Superman & Lois aired its first 5 episodes before getting replaced with Supergirl so that the former can get back on shooting the rest of the 10 episodes. Batwoman feels this chopping up the hardest if you ask me. I’ve constantly seen the trend of the show getting a rise in viewership for a week or two only for another hiatus to rear its head and kill the momentum the show was building. This isn’t a problem for just the Arrowverse shows, the entirety of The CW’s lineup is down in viewership and facing these same problems, but for the big brass over at WB that doesn’t really matter. Viewership is down, so profits are down.

I also think is a reason for the down-tick is the quality of storytelling is not what it once was. In short, I feel that many of the shows have grown stale. I can't speak for Black Lightning as I don't watch that show, but I know that people found Season 5 did not have a well thought out overall story. I don't find the same level of enjoyment in The Flash that used to. Why is this? Well, I think it’s a part of the ‘long-running show’ curse. That the people behind the scenes have run out of story ideas they were more passionate about, that they’ve done so many episodes they’re unintendedly repeating themselves, just going through the motions etc. In short: the shows are growing stale.

With some very good Superhero alternatives out there such as The Boys and The Falcon and The Winter Soldier, there are some excellent alternatives out there for people. Shows with much higher budgets, with star-talent, behind them. Shows that are thus of much higher quality. That’s an expectation I feel many don’t realize. I’ve seen many critiques of The CW for their lower production values but really, they do the best they can with their restricted budgets. The critique that the Arrowverse is very cringey and tropey is valid though. The CW has a style of sorts with its shows. They tend to be melodramatic, rely on awkward humour, lots of angst etc. It does get old and other shows have found better ways to tackle political and societal issues.

If the Arrowverse remains on its current path. Keep the same style of outdated storytelling I feel that the series time is running short. With Arrow having ended, Supergirl and Black Lightning about to end and multiple new shows not moving forward there is a big chance that we’re seeing the beginning of the end. I feel that it will either keep going in the same way it has in the last decade or so and burn out in a year or two or evolve with the rest of the Superhero shows. To refresh not only its slate but also the way The CW makes these shows.

That refresh might already be happening in the form of Superman And Lois.

Superman And Lois, Legends and Naomi

Superman and Lois is the newest entry into the Arrowverse and currently its most successful one. It’s a show that’s quite a bit different from the rest of the Arrowverse. It’s a co-production between The CW and HBO Max. Because of this, it has a bigger budget as well as some different talent behind it. In large part, because of this, the show is the cream of the crop of the current TV season. The higher budget and production values make the gap between it and the competition smaller. There is fewer of that trademark CW shortcomings to be found (though some are still there) and I also think that the shorter episode count helps in making the show feel fresh.

Stargirl fits into a similar category. It started out on the DC Universe streaming service exclusive, started airing on The CW as well and is now a CW exclusive. While it has some of the traditional Arrowverse talents behind it such as Greg Berlanti, just like Superman and Lois, it has a higher budget and higher production values. Again, it feels different from the current crop of shows in a good way.

The deal between the CW and HBO Max also extends to upcoming shows, like Naomi, and even seems to start to affect the already existing shows. By the time I write this article, Legends Season 6 has not yet aired but the trailers have been released. There are some clear indications that the budget has gotten an up-tic but we’ll have to wait and see if this is truly the case or not.

While the Arrowverse isn’t doing as hot in both viewership and ratings as it once did, there is a path forward. If The CW can keep up the type of production behind Superman and Lois, even extend to the other shows, I think there’s a good chance of the Arrowverse remaining relevant.