Let's take a look at what is essentially this show's movie-length premiere. 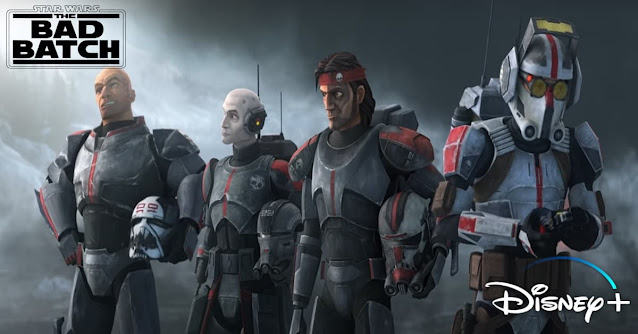 There’s a little thing you need to know about my tastes in TV/Movies. I love animation. Like, a lot. I’m always on the lookout for new animated TV shows to watch. It’s because of this love for the craft of animation that I gave The Clone Wars a shot years ago. Growing up, I wasn’t a Star Wars kid. My bullies were though and that fact alone was a big reason why I never got into it as a kid. But during my teenage years, the good buzz around the show and my interest in animation finally pushed me to watch The Clone Wars. I enjoyed it thoroughly, especially the later seasons when the quality of animation improved and the story-telling became more mature.

Now there’s a brand-new animated Star Wars shown on the block. The Bad Batch, a spin-off of The Clone Wars season 7. Never have watched that season though but the basic concept does sound intriguing to me. A black-ops team of mutated Clone Troops trying to survive in the Galaxy post Order 66.
So without further ado, let’s dive in and see what the latest animated Star Wars show has to offer!

The 71-minute long premiere of The Bad Batch picks up just before Order 66 because of course, it does. It shows what Clone Force 99 AKA The Bad Batch are up to during this infamous moment in Star Wars history. After taking down a battalion of Separatists Droids all on their own, the Bad Batch start marching forward to the frontline with Padawan Caleb. It’s at this moment in which Order 66 is given. While the ‘normal’ Clones react as is expected The Bad Batch do not. They are, in essence, Mutated Clones which results in their inhibitor chips not working quite right. Because of this Hunter is confused by the situation he and fellow Bad Batch member Crosshair go in pursuit hoping to make sense of the situation.

That’s where I’m going to leave you as I feel that the rest of the story is better experienced by yourself. My reviews are as spoiler-free as I can get them after all.

The story of this premiere episode takes a while to get going. The first half or so is focused more on establishing the characters and setting of the series. This makes the first half slow and perhaps not the most interesting to the more casual Star Wars crowd like myself. While showing off the effects of Order 66 from a relatively new angle is interesting and the dread that comes with the situation makes for some proper tension the first half felt a bit iffy to me. However, this does make the second half of the premiere much stronger.

This is where the show pulled me in. Once the episode has done enough establishing the plot kicks into high gear and uses the earlier setup to its advantage. The characters for one, are very interesting and well-written and benefit from the time the episode established them. It makes the conflict that escalates between some of them hit much harder. That, alongside some very good twist and turns and strong and tense action sequences, makes the second half strong and enjoyable.

What I also want to mention here is a line that is repeated throughout the premiere. Good soldiers follow orders. It’s a line with a lot of meaning behind it. That being a good soldier and a good person is not the same thing. What if an order comes through that you think is wrong? In the case of this episode the order to kill the Jedi, Padawan AKA children included. What do you do then? Follow said orders like a good soldier or refuse it and be a good person? Not only does it turn out to be critical for the plot, it’s a question I had personally been contemplating after it was brought up in The Falcon and The Winter Soldier. It’s a very interesting question that and one I hope the show will keep on exploring.

The animation is beautiful. It’s the same animation style as (the latter half of) The Clone Wars and Rebels. You can clearly see that the combination of experience with this animation style from the development team and the increase in what tech you can do has paid off. I can remember the animation looking rather stiff at times, especially on the human models and the faces. I’m happy to report that this is not the case here.

The faces especially are very well animated, both in the fluidity of mouth movement and facial expression. The moment has a good flow while simultaneously having a good sense of weight to them. The background is well done though some of them are rather grey and dull to look at. To be fair though, grey and very monotonous is just what an army base looks like so these moments are intentional.

Judging from the first episode, the Bad Batch is a series that can be viewed by a casual audience as well as hardcore Star Wars fans. I am only a Star Wars Casual and could easily follow along with the story and get invested in the characters. I never watched Rebels, but through pop-culture osmosis, I did start to suspect that young Padawan Caleb could very well be Kanan from Star Wars Rebels. While it was never directly stated a quick Google search confirmed my suspicions. It’s a detail that you don’t need to know to understand, to get the emotional core, of this scene. It’s more a cool easter-egg for the fans.

Star Wars The Bad Batch, judging from this movie-event premiere, is another win for Star Wars and Disney+. It offers up a good show that’s well animated and can be enjoyed by both casual viewers and big Star Wars fans. The first half might have been a bit slow but the premiere makes full use of the setup provided in that first half to create a tense second half that will leave you wanting more.

Let’s hope it can keep up this momentum.