Let's take a look at the DLC Nintendo has put for their Switch games and see how it all stacks up. 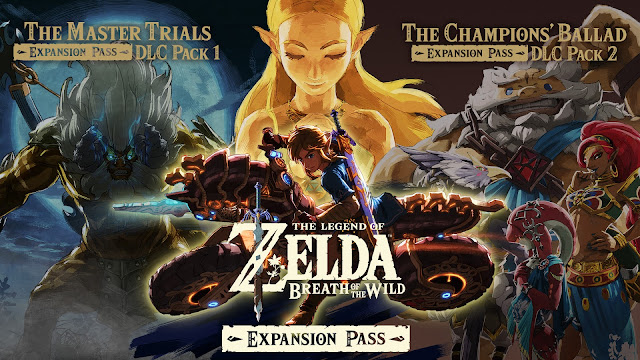 Where DLC, expansions and in-game purchases have been commonplace in the gaming industry for quite a while now. Just look at Ubisoft's or Activision-Blizzard's output of the recent years. When have those two not given their games some sort of DLC in the last handful of years? That is an exaggeration on my part but you can easily see what I mean. Nintendo, however, has typically stayed away from it. Starting with the Switch though, the company has become much more comfortable in making DLC and expansions for their titles. Now, I want to take a deeper look into it all. See what Nintendo has done right with their DLC, what they haven't done right and where they can go with it in the future.
Let's dive in.

The rise of DLC and Nintendo's first dip.

Downloadable Content and Expansions to already existing games started around the mid-1990s. With the Internet, it became feasible for a publisher to release updates for their games easily and efficiently. As easy and efficient as the Internet was back then. One of the first videogame expansions was Warcraft 2: Beyond the Portal and was well received by its fans.

When the world at large truly entered the digital age, that was when DLC started to rise as well. With the launch of Steam in the early 2000s, DLC on the PC side of things became that much easier. With the PS3 and Xbox incorporating Internet access as a big feature, the practice entered console gaming. It finally had the same easy and efficient delivery systems as PC.

Nintendo remained rather stubborn and didn't dip their toe into DLC until 2012 with the Nintendo 3DS believe it or not. For a few hundred yen, you could buy additional maps with some exclusive characters for Fire Emblem Awakening from the EShop. It set the tone for The Wii U got some DLC as well but it stuck to the trend set on the 3DS. Nintendo did start giving DLC to bigger titles here with the multiplayer-focused Mario Kart 8 and Super Smash Bros. for Wii U getting new courses & characters and fighters respectively. Nothing that matched the big boy expansions the competition made though.

DLC and even free updates have been more commonplace in general with Nintendo in the last four years. Ever since the Switch launched. It has gotten to the point that games such as Animal Crossing: New Horizons and Mario Tennis Aces got regular free updates in the months after release.

And that's where one of the two points of contention lies. That Nintendo's games have been releasing half-backed. Gutted, simply so that they can trickle out this missing content over the months to keep players engaged for longer. And I do have to agree with this sentiment.

If I look at the games that Nintendo has used the free update model with they are, for one, almost always multiplayer-focused games. Animal Crossing: New Horizons, Mario Tennis Aces, Mario Golf Super Rush and Splatoon 2 as well if you squint your eyes a bit. It does make sense why Nintendo is using this model with multiplayer games. To get the most out of these games you need others to play with and for that to happen the community has to remain active. Regular free, though small, updates help to keep the people engaged and/or bring them back at the time these updates drop.

On the flip side, you have that criticism. That these updates are incremental. Nothing more the content that should've been in the base game in the first place. With that, I have to agree. Both Tennis Aces and Golf Super Rush launched in a state in which was fine but barebones. Didn´t have as many characters, stages or modes as people wanted. Those came later in the free updates. To mixed results. The latest characters to be added to Golf Super Rush were Koopa Troopa for and Ninji for example. Not the most exciting additions, no? I mean Koopa Troopa is a character that you'd expect to just be in the base roster already!

I would also like to address the actual expansions Nintendo has brought out. The other criticism that has been thrown around is that they are rather barebones. I once again have to agree with that. For the most part. While no Nintendo expansion has come close to the likes of the Witcher 3 expansions, I wouldn't call them bad either. A good expansion is a memorable experience that builds upon the original game and for the most part, I'd say that rings true for Nintendo's expansions.

The first expansion Nintendo of this generation, the 2 parted The Master Trials and The Champions' Ballad, did just that. It added a brand new challenge to the game that tested your survival skills and gave fans a better look at the Champions and an entirely new Divine Beast/Dungeon to boot. It could´ve done a better job in the story department, I´m not denying that, but it was fun. It didn't take away from the base game experience and the pricing was fair, if only just.

And Nintendo has become better at nailing down what an expansion should really be. The Pokémon Sword & Shield Expansion pass was an improvement over the base game and for many the best part of the game. Fire Emblem: Cindered Shadows gave the game an entirely new location, new characters and gave answers to some of the base game's unresolved mysteries. Xenoblade 2: Torna the Golden Country was almost an entirely new game. It served as a prequel to the main game showing the much talked about war and the origins of one of the main villains. It has adjusted gameplay (which I prefer over Xenoblade Chronicles 2's) and even got its own physical release. It's hands down their best expansion to date both in implementation and value.

It might be very annoying that this content launches later, that the base-game starts out barebones/incomplete: it's still free. You don't have to pay a dime to get this 'missing' content. You just have to wait for it. That's still better than the type of DLC/added content practices of the competition. They have no qualms about forcing you to pay for all of that stuff. Launching a game incomplete can hurt that game's reception and sales but so far that hasn't been a problem for Nintendo. Yet.

Still, I do think Nintendo should find other ways to keep people engaged in these games. Something more like the Splatfest from Splatoon or make these free updates more exciting for players. In terms of Nintendo's big expansions, they're mostly fine. They don't currently reach their full potential but they're still enjoyable and valued at a good price even if it is pushing said price a little. Nintendo should keep experimenting and innovating with how much content they put into an expansion. I think people would pay more if the content they get is beefy enough.