What if... Marvel did an animated show that sets the tone for the rest of Phase 4? 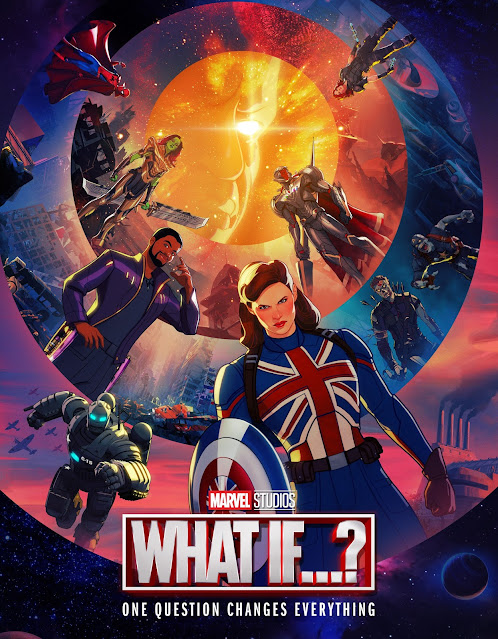 With What If...? (yes, the '...?' is an official part of the name) Marvel Studios once more dives into a new corner of cinema. Animation. Using the finale of Loki Season 1 as a jumping-on point Marvel uses the freedom animation brings to go wild while keeping the entire endeavour 'canon' to the MCU. To tell us stories that might have never seen the light of day otherwise. Is it, just like nearly every frontier the MCU has explored, a success?

Honestly, it's a 'hit or mis' show. Not every episode is born equal and there are ones that will get your blood pumping while others will feel like nothing more but filler.

In Marvel's What If...? We follow the mysterious and all-powerful yet non-interfering being called 'The Watcher'. The Watcher guides us, the audience, through the Multiverse. A realm of endless possibilities where everything goes. Where new heroes can rise while familiar ones might have never had the chance to become one. In practice, this means that each episode shows us how events within the MCU could've played out if one or sometimes multiple events happened differently.

Take the first episode, "What If... Captain Carter Was the First Avenger?", for example. Using the events of Captain America: The First Avenger as a jumping point to give us Peggy Carter becoming a super-soldier. To become the hero that the character never was given the chance to in the movies. It's a good episode to start the series with. To show the audience what the show is all about and start off by easing the audience into the show with an easy to understand outing. The episode is just a retelling of The First Avenger, but with Carter filling Caps role and some small deviations here and there.

And that, ladies and gentlemen, is this show's biggest problem as well. Some episodes are wildly entertaining while others will fall flat for you depending on your tastes. The quality of the episode and the general enjoyment one can find in them very greatly. Like Zombies? Then episode5 will probably keep you at the edge of your seat. Don't like Zombies (like yours truly)? Well, you're out of luck. Even within the episode themselves some moments are more interesting, are better written and executed, than others. Ultron/Vision is awesome to look at and his episode is one of the best but I can't say he's a well-written character.

Binge-watching the show can help alleviate these problems but when you watch it week to week as they were released it's not outside of the realm for you to lose interest in the show. I myself skipped over the Zombie episode initially due to my distaste for the genre only watching it (very begrudgingly) at the very end for this very review.

It's good then that What If...? does tie together each standalone episode in some fashion. The Watcher narrates each and every episode, some imagery is shared are the small connection. The big one comes in the season finale. This episode, without spoiling the surprise completely, has ties to every single episode of season 1. Even the episode(s) that got cut due to Covid is represented. That did result in some elements of the final essentially coming out of nowhere but that's forgivable even if it's pretty noticeable.

The animation style of What If...? is a cell-shaded 3D type of affair. A bit bland if you ask me. Even if I'm not that fond of the animation style the animation itself, the movement and the visuals, are top-notch. In live-action, fight sequences are expensive, require a lot of prep work and are just much more hindered by, you know, the laws of physics. For animation, no such restraints exist. A big action sequence isn't that more difficult to make than just two characters talking to each other.

Because of this What If...? can go much wilder and more spectacular with their visuals and they certainly know-how. Even if a certain episode disappoints overall there are still some very impressive visuals or a cool fight sequence in it.

The voice acting of What If...? is interesting. As it's canon to the MCU the producers have invited back many of the actors to reprise their roles. Not all of them do, however. Mark Ruffalo and Jeremy Renner are here to voice their parts but Robert Downey Jr. and Brie Larson aren't. It´s a bit jarring hearing the traditional and the new cast interact, I won´t lie.

Doesn't take away from the performances themselves, luckily. These are good, haven´t heard a bad performance in any of the episodes. The only one I really have problems with is Mick Winger as Tony Stark. I always thought that he´s too high pitched and, well, whiney sounding to fit the character and that problem is only more pronounced when you have RDJ´s Stark in the back of your head. That said, Lake Bell does a really good job with Black Widow and Benedict Cumberbatch gives an excellent vocal performance as well.

The music and sound effects fall into a similar category for me. The sounds, think Cap's Shield and Thor's Hammer, are straight out of the movies and still sound excellent. There are also tracks from the MCU here as well. The new tracks aren't that interesting sadly enough, not very memorable. When mixed with these traditional sounds and tracks it once again becomes rather jarring. To me at least. The opening theme though? That one is quite excellent.

Marvel Studio's first attempt at animation is a mixed bag. Its anthology approach results in a very hit or miss season. Some episodes land and some don't. The writing is that uneven, I'm afraid. The animation style isn't anything special but does lend itself well to some impressive action, visuals and shots. The performance of the voice cast is good but the combination of MCU actors and replacements actors is jarring.

For the more diehard Marvel fans, it'll be an enjoyable watch but I won't blame anyone if they decide to skip certain episodes of the season or just the show in its entirety.