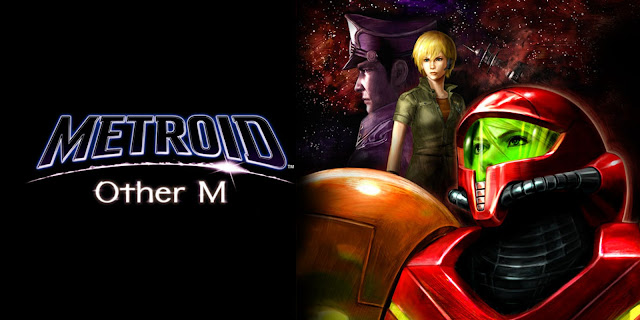 With Metroid Dread releasing soon I felt the time was right for another Metroid review. The only question was: which game shall I choose? Well, I landed on 2010's Metroid: Other M for the Nintendo Wii. Where Metroid Prime did their best "the ultimate first-person experience" Sakamoto wanted to take Other M in a different direction. To make it a more narrative-driven game that "controls as simple as those of an NES game". To mixed success. Other M is a divisive game in the series. Its story and its control scheme in particular cited to be particularly terrible. Even so, I gave it a go and ended up feeling... underwhelmed. It was neither the burning wreck the fans made it out to be nor the hidden gem that I silently hoped it could be.
Let's dive in!

Samus Aran, the galaxy's greatest bounty hunter, arrives at a space vessel knows as the "Bottle Ship" after picking up a distress signal. Aboard the Bottle Ship, she almost immediately runs into a platoon of soldiers from the Galactic Federation, space military if you will, among which are two of her former comrades from her own time in the Galactic Federation. Anthony Higgs and her former commanding officer Adam Malkovich. After saving the platoon from a monster attack Samus teams up with the platoon to search for survivors and get to the bottom of the mystery that is at the heart of the Bottle Ship and stop the dangers that lie within.

The core narrative of Other M's story isn't half bad. The intrigue is set immediately with the distress signal and the bad state the Bottle Ship is in. The Galactic Federation barging in was a nice surprise and helps make it all more interesting as it gives Samus people to bounce off. The mystery is interesting, the atmosphere is properly chilling and there are some nice twists, turns and surprises along the way as well. An enjoyable story if not flawed.

They could've done a better job with the clarity. There's a plot point introduced about halfway through the game that is never properly resolved. The FMV produced to tell the story are very well produced and help give it all an extra kick. My only complaint with them is their length. Some FMV's are well over 10 minutes long and that's just too long of an interruption.

Where the game certainly stumbles is in the characterization of Samus herself. To be blunt: it's not good. The style of writing with her doesn't extend much further than teenage diary stuff. It takes away from Samus' image as a strong and independent character and beyond that, it's just a whole lot of cringe. The very stilted, emotionless voice acting of Jessica Martin doesn't help much either. It's all passable when Samus is just interacting with the Galactic Federation or spouting some exposition but the moment it goes deeper than that it all falls apart.

In the gameplay department, it's still a Metroidvania (or "Search Action" as I've seen it called more and more later). It's a platformer but instead of a linear path it´s more of a labyrinth. One that opens up more based on your progression. Other M mixes the style of the traditional 2D Metroid games with elements of the 3D Prime series. It's running in mostly fixed perspective hallways. When pointing the Wii remote at the screen you enter a third-person mode. It's a good attempt of merging the two styles, to make this game fans of both could get into, but it just doesn't work. The problem relies on lies in the switch between the two perspectives and the limitations of the controller setup.

The fixed hallway sections are the most fun because of their simplicity. It's just running, jumping and gunning at monsters without much in the way of complexity. It works well, the 3D environment means that it isn't confined to just a side-way angle and plays around with its perspective regularly making it all more interesting. Sakamoto had the right idea here though they could've perhaps made the camera angles a bit more pleasant. It did get stuck in unfortunate places hindering me.

The problem comes in with perspective shift and the lack of buttons. Switching to the 1st person view is something that might have looked good on paper but doesn't work in practice. Having to turn the Wii remote to go into 3D person view takes time and it doesn´t always register. Locking moves such as the missiles behind it makes it even more tedious. It´s fine when you´re just chilling and use it to look around in your environment but pulling it off correctly and quickly during the heat of combat is more down to luck than anything else.

This is a game that screams to for a controller with more buttons. The Wii remote only has a D-pad which doesn't quite work for the free-roaming this game has. The dodge is locked in the D-pad itself instead of having a dedicated button which makes pulling off annoying. Just count on your fingers how many times it doesn't work or works when you don't want it to. You'll quickly lose count, trust me. If the controller had more buttons, if they even had used the Nunchuck, I feel that the controls would've been much less problematic and clunky. I feel that the general easy difficulty of this game, that you can regenerate your own health when close to death, was done to balance out the clunk the controls lead to.

Just a few more points to go. The graphics, soundtrack and level design is well done. Other M looks pretty good. The Wii is far from the best looking console but Other M looks good, nothing to really complain about for what it is. The environment is a lot of metallic, darkly light hallways but that's fitting with the abandoned space station setting. And it's not that that's the only type of environment. There are different biomes here such as a Forrest section for example. It leads to good, but not especially inspired level design. It's much more linear than I thought it would be which does make it easier to memorize everything. The soundtrack is equally fitting. It's quiet, knows when to play and when not and has this eery undertone in almost every track and has a good ring to it.

Metroid: Other M is neither a train wreck nor this misunderstood gem. Yes, the most prevalent criticism you hear about this game is true. The story is flawed and Samus' characterization is poor. The controls are weird and clunky. Yet, the story is overall enjoyable and the controls are at least understandable and something you can get used to for the most part. The other aspects of the game are good, the FMV's are well made, the game looks good and sounds good and the level design is fun if not a bit too linear.

While it's not a game I can wholeheartedly recommend nor is it one I see myself ever going back to, if you feel like playing Metroid: Other M for whatever reason I would give it a fair shot.