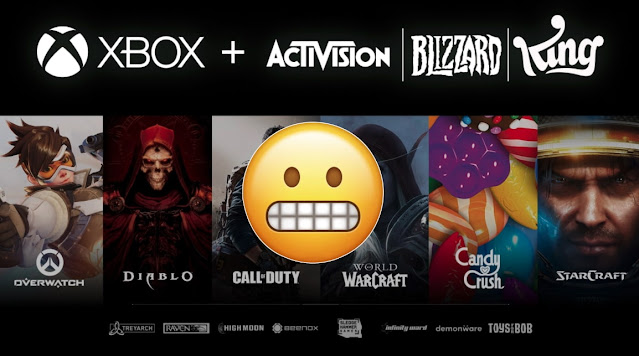 2022 has barely begun and already the gaming industry has seen a massive shakeup. On January 15th Microsoft announced it had struck a deal to acquire game developer Activision Blizzard. It's a big story that everyone in the gaming industry and beyond has covered already. With how monumental this acquisition is I wanted time to mull it all over and wait for more information for a bigger picture before covering it myself.

With that out of the way, let's dive into Microsoft buying Activision Blizzard. The how, the why. The past, present and future. The good and the bad. And, you know, my complicated feelings about the whole affair.

The downfall of Activision Blizzard

Activision Blizzard came to be in 2008 after the merger of gaming studios Activision and Blizzard (what a surprise!). Owing IP's such as Call of Duty, Overwatch and World of Warcraft the company throughout the last 14 years grew to be the biggest player in the industry by market capitalization at an estimated net worth of 75.2 billion dollars in June 2021. With such a strong lineup of franchises and deep pockets, the company had nothing to fear, right? Yeah. No. On July 20, 2021, the California Department of Fair Employment and Housing filed a lawsuit against Activision Blizzard after a two-year investigation. If I'd discuss the entirety of the investigation and the fallout we'd be here all day (read this Den of Geek article for all the details) but the core of it all is the following.

Activision Blizzard cultivated a toxic work environment full of bullying, sexual harassment. Where a 'frat boy' culture had the overtone. It was bad. A woman died. Since then much more has come to light about the company. Some that were named in the suit were fired but mostly, CEO Bobby Kotick did nothing. Worse, he used his position to hush it all up. Others in the industry spoke out against Activision Blizzard and put continued partnership with the studio into question. Employees staged walkouts, started unionization efforts or just flat out left.

The accusations made their way to the top brass. Kotick reportedly not only knew about the abuse for years but covered it up while participated in it himself. Threatened to 'kill' his assistant for example. Kotick even, reportedly, considered buying news outlets such as Kotaku to "change the narrative". Over 2000 employees signed a letter asking for Kotick's removal yet, even with all of this scrutiny, the board refused to give in to demands and Kotick remains CEO to this day.

Why would Microsoft put down billions of dollars for a company that's strife with scandal and slowly, but surely, imploding? Because of Microsoft’s continued efforts to become the nr 1. in the videogame industry and build out an entire ecosystem of its own. Become the Netflix of gaming through their Game Pass service. Typically, exclusive titles are what propel consoles. What pushes consumers to buy one console over the other. Where Nintendo has the likes of Mario, Zelda and Pokémon in their corner both PlayStation and Xbox have had troubles building up a library of exclusives. It's why Microsoft has been buying up lots of studios in the last few years. From promising indie studios to bigger ones, like Bethesda. To build out their list of exclusives without having to spend the time and money building up like Sony did with series such as God of War and Uncharted.

With the popularity of Activision Blizzard franchises, Microsoft will add an impressive amount of franchises to the Xbox family that will influence gamers to buy into the Xbox ecosystem. Some people buy consoles just to play the new Call of Duty, for example. Even so, why buy Activision Blizzard at a time it's under such scrutiny? Because if it wasn't, they would have never had the opportunity to buy it.

While Kotick has been going around citing reasons such as the disappointing sales of the latest Call of Duty as a reason to sell, the truth is, the scandal is what made the sell happen. Microsoft looked at the situation, all the negative press and the pressure, and saw this as an opportunity. While the scandals had yet to do any significant damage to the company, they settled the harassment lawsuit for an 18 Million dollar settlement, pocket change compared to their billion dollars net worth, they were in trouble. Their public image was down the drain and, as you've already read, the storm was far from over.

It was up in the air if the company would be able to wither the storm so for the top brass like Kotick to be offered such a lucrative 'get out of jail free card proved irresistible. Get a few million and get out of that sinking ship. And that's what they did.

My views on the acquisition

With all of that out of the way, it's time for the subjective portion of this article. From the thumbnail, you can see that I'm not that thrilled by it. I have concerns about the deal but I can see some positives as well. Let's start by breaking down my misgivings.

I understand that acquiring a studio with a strong library of IP´s under its belt is a faster way to build out your exclusives, but the matter of the fact is, they are taking games away instead of offering up more. 3rd party games have been called ´the great equalizer´ for a reason. That is because they released for both Xbox and PlayStation, giving players a steady stream of (AAA) titles to enjoy no matter which side of the aisle you are on. Phil Spencer has stated that Microsoft wants to keep Call of Duty on PlayStation but that's not a guarantee it will happen. Microsoft is going to make new games in established franchises, let's say a Diablo V, and make them Xbox exclusives.

The acquisition also rings a lot of familiar bells. Disney bells. I just can't help but compare it to Disney buying Fox a few years back. I like Disney but the company has become a dominating force in the movie industry and that's not a good thing. I'm happy with the relative balance we currently have between the big three and I'd rather not see it massively disrupted. Especially not by a company that has more money behind it than God and could, in theory, simply buy its way to the top and push everyone else around. I'd rather not have that fear become reality.

The silver linings? Well, first up, the acquisition will hopefully lead to a better working culture at Activision Blizzard. The company's previous statements in regards to improving working conditions have been rather hollow if you ask me. Reeking of typical PR jibber-jabber. With new management, from a company that doesn't show any sign of having such a toxic culture itself, there's hope for real change.

Phil Spencer has, again, stated that he wants Activision Blizzard studios to work on multiple franchises and the days of Call of Duty being a yearly release seem over as well. I don't have much reason to doubt him on his word this time. It makes sense. They've been buying studios to build out their list of franchises. To have a massive list of content for GamePass. Why wouldn't they let these

I, for one, would be more than happy to see Toys for Bob go back to what they are good at.. 3D action platformers. Xbox got some work to do in this department and as the current owner of Banjo Kazooie and soon-to-be owner of Crash and Spyro they can work on getting stronger in this department.

Microsoft buying Activision Blizzard is a big deal. The arguably biggest AAA 3rd party developer will be a 3rd party no longer. Big franchises such as Call Of Duty and World Of Warcraft are now Xbox's to play with. For Microsoft to build out GamePass in their bid to make it the 'Netflix of gaming. I'm not too thrilled by this acquisition but it is early days. The deal still has to be approved by the American government and even then, the acquisition won't be completed until mid-2023.

We won't know what the future of Activision Blizzard will look like as of now. I do hope though that Microsoft will improve working conditions at the studio, let them work on more than just Call of Duty and let some games come to other platforms as well.

Liked what your read? Want to join the discussion? Why not leave a comment! If you do, keep it civil and respectful. Also don't include any links in the comment. For safety reasons, those comments won't make it through moderation.