The games that disappointed me in 2021. 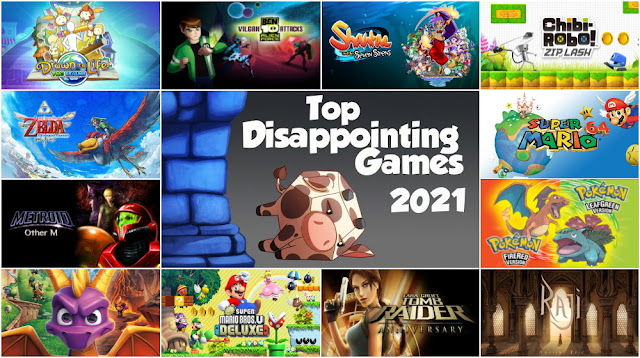 When you make a list of your favourite games you played in 2021 then a list with the opposite can't be far behind, now can it? I played a lot of good, even amazing, games in 2021. I also played some that were... less than stellar. To be fair to 2021, and my own patient gaming habits, I didn't actually play a lot of outright terrible games. I did, however, play some games that left me disappointed. That left me hanging for one reason or another.

Without further ado, and keeping in mind that this list is just my opinion and nothing more, let's dive in! Oh and if you want to read my review on all of these games, just click each entries image to be taken to their review.

Numbers 5 & 4 are on this list for very similar reasons. They are games that aren't viewed very favourably by their fanbase while I was hoping they would either be underrated gems or laughably bad. However, they ended up being neither and that is what disappointed me, amongst other things.

5. The Legend of Zelda Skyward Sword

In the case of Skyward Sword, it was the by the numbers approach of its story. When talking about the Wii original, the motion controls is what people converse about most. That's the big reason people point towards when discussing why it´s ´bad´. I felt that the motion controls were indeed not as well handled as they could've been but I think this aspect overblown.

Instead, I felt that the by the numbers nature of the game is what holds it back the most. Beneath all the shine is a very by the numbers and repetitive Zelda game whose motion controls are the only noteworthy change. It sticks to the formula with only minor changes, like the altered Link/Zelda dynamic and with a lot of backtracking (which doesn't bother me as much, but still). This is doubly disappointing when you consider Skyward Sword as the earliest Zelda game in the timeline. The 'origin' game, if you will. Lots of story potential was left untapped as a result of sticking so close to the formula.

Skyward Sword isn't a bad game. I did enjoy it a fair bit, but it’s by the numbers and repetitive approach underwhelmed me in the end.

With Metroid: Other M, I'm disappointed by its general execution. I saw that the big reason people disliked it was for the very bad story. One that paints a very unflattering picture of series protagonist Samus Aran. I, however, didn't know much of anything about Samus or the world of Metroid really (Samus Returns is far from a story-heavy romp) so I wondered how the story would hit for me. Even more intriguing was the flipping control scheme, a result of the game combining 2D and 3D gameplay.

As you can guess by, well, being on this list it didn't live up to interest in it. The story is, indeed, pretty bad. The characterizations are bad, the pacing is off, the writing is stilted and plot points are introduced only to be completely forgotten. The controls are too simple, a lack of buttons is the biggest problem, and switching between the 2D and 3D sections breaks the gameplay flow.

I did have fun with this game. I consider it mediocre and not outright bad, but I had expected it to be more... entertaining. For better or for worse. What it does good it does well, but not great. What it does bad is it does poorly, but not exceptionally so. Not a remarkable experience for me in either direction.

Welp. This is going to ruffle a lot of feathers! Look: I know that Super Mario 64 is a very beloved title for many but for me personally? It disappointed. When going into the game I kept in the back of my mind that the game is 25 years old. To not expect something too polished. Even with that, the game failed to tickle my fancy.

I enjoyed the game at the start. Neat setup. Fun levels and atmosphere. At a point, I hit a level that I just didn't enjoy. I had a lot of difficulties traversing the world with the janky controls and finding the right amount of stars became a slog. I told myself: 'the next world will be more fun', but that sadly didn't happen. The game just kept crawling on like that. I lost my fun with and I pushed through more out of obligation and stubbornness than enjoyment.

I see that the game isn't bad. I see why people love it so much. However, I was disappointed by it and I don't see myself ever playing it again.

Chibi-Robo! Zip Lash is not a great game. I knew that before I even bought it. Why did I buy it then? For the same reason that pushing a big, red button is very tempting. YouTuber Scott the Woz is a big fan of the Chibi-Robo! series and has a running gag and a dedicated video to this game. With all of that build-up, I really wanted to experience the title for myself even if it is widely considered to be bad.

And yeah, it isn't great. I didn't feel particularly offended by it but I can't say I had that much enjoyment either. It has some charm, but this is weighed down by a very bland and uninspired design and questionable design decisions. A spinning wheel to determine the next level? Really? Ugh.

Chibi-Robo! Zip Lash is a game whose entertainment lies in what it represents, not what it actually is. If you played it for 5 minutes, you've basically experienced the entire game.

The biggest disappointment in the realm of gaming came early in the year. Drawn to Life and its sequel, Drawn to Life: The Next Chapter, are two games that have a special place in my heart. They were 2D side-scrolling platformers in which you, the player, gets to draw your own character and elements of the world using the DS' touchscreen. They were fun games in which players could let their imagination run wild (to an extent) all the while engaging with the unique world and the surprisingly insightful and emotional story. I will fully admit: I cried HARD at The Next Chapter's twist ending. The original one, not the altered version to be clear.

Thus, when the unexpected news came that 505 Games had acquired the Drawn to Life license and were making a new entry, I was ecstatic. That feeling faded rather quickly after reading the first round of reviews however. They weren't positive and now I understand why. The decision to change the gameplay to short, puzzle-like levels doesn't work for an entire game. The story doesn't hold a candle to the originals and the drawing element has been heavily downplayed.

I had fun with it. There were some fun moments, some neat ideas and there is a lot of potentials that a sequel could take advantage of. However, there are just too many problems, too many frustrations, for me to play this game again any time soon. For failing to live up to the series and for severely lowering the chances of the series continuing, Drawn to Life: Two Realms is the biggest gaming disappointment of 2021 for me.