My favourite games of 2021 as well as my game of the year! 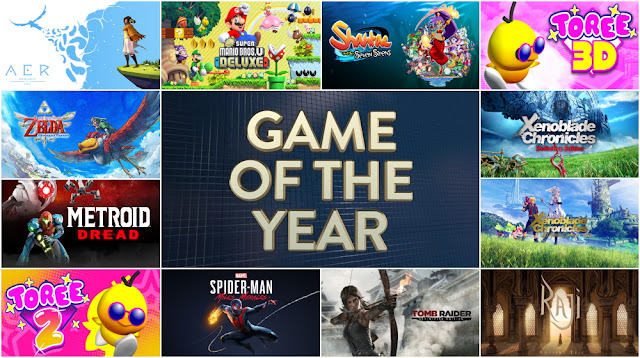 Late last year I made a promise to myself. To give me an extra push to finish my backlog I would review every single game I played that year. A promise I've managed to keep. Even if not every review is published yet, all 29 games (including expansions) I've finished this year have a review written for them. A good feeling. Yet, I'm not quite done. I now have a clear list of games for me to pick my favourites and to crown my game of the year. Always a fun thing to do, no?

Before diving in, a few disclaimers. The traditional definition of 'Game of the Year' is that you bestow the 2021 release with this honour. However: I only finished 3, 'new', 2021 games. I don't think it fair that simply because I'm a patient gamer my Game of the Year would have to be one of these three. Any game that I finished for the first time this year is eligible for MY Game of The Year. The 2021 release highest on the list is what you can consider my 'traditional' Game of the Year should you so choose.

All right then. Now it's time to dive in! Oh and if you want to read my review on all of these games, just click each entries purple header to be taken to their review.

5. The Legend of Zelda: Link's Awakening

The number 5 on this list was a bit difficult to pick. The other 4 came to mind almost immediately. After looking back at all the games I played, Link's Awakening stood out. A wonderful remake of the GB that came off the heels of Breath of the Wild to confirm that, yes, 2D Zelda's are still relevant. They have their own kind of appeal and this game is a very good showcase for it. Link's Awakening is a very pleasant game. Links journey to leave Koholint is marked by, interesting characters, a wonderful world and its twist ending that put the entire journey into perspective.

It's not perfect, of course, but perfection is no guarantee of enjoyment and Link's Awakening proves that top-down Zelda isn't going anywhere. Perhaps we'll even see another 2D Zelda remake on the Switch. The two Oracle games were made using the engine and assets of the OG Link's Awakening so it isn't outside the realm of possibility that Nintendo & Grezzo would do the same again.

From the 3 PS4/5 games I finished this year, Spider-Man: Miles Morales is my favourite. I very much enjoyed Tomb Raider: Definitive Edition but I didn't end my playthrough of that game pumped up proclaiming 'that was epic!'. Because it was. Spider-Man: Miles Morales was one of the two titles bundled with my PS5 which I had no objections to. I wanted to buy it anyway and didn't mind playing it before the other Spider-Man game. I like Miles Morales more than Peter Parker after all.

A short but sweet experience, Spider-Man: Miles Morales was an excellent way to start my PS5 journey. It was a good showcase of what the PS5 can do, the graphical fidelity, the loading times etc. while providing me with a very good Miles Morales story. The gameplay was awesome and fluid, swinging across a snowy New York feels really good and yes, the amazing action and the emotional ending got me all riled up.

Yeah, definitely the best PS4/5 game I finished this year. Can't wait to crack up the PS4 Spider-Man game sometime in 2022!

No Switch game has taken up more of my time in 2021 than this game. I can't exactly recall what led up to my decision to put Xenoblade Chronicles 2 on my 2018 Christmas list but I'm so happy I did. The Monolift Soft created JRPG's have been one of my favourite games I played in recent years. They are not for everyone, they are long and the gameplay can be very complex, but the world(s) is so unique and fleshed out while the story and its characters are amazing.

And it all started with the Wii original now remastered and improved on the Switch using XC2's engine. It was a no-brainer for me to buy and after a bit of a false start, I started the game up proper. It was great. The world of The Bionis and The Mechonis is breath-taking The characters are multi-layered and endearing. The story is well-written and thought-provoking. The gameplay can be confusing but still enjoyable once you understand it.

Plus: Future Connected is a part of this package. I got the improved original plus the brand-new epilogue (and potential XC3 prologue) with the massive base game. A much shorter experience in basically everything, it's a wonderful little experience to end it all on.

Metroid: Dread. My 'traditional' game of the year. I only played 2 Metroid games before its release, Samus Returns & Other M, but that didn't stop me from getting hyped for this game. It felt like the only really 'big' game Nintendo had for the year. It looked great and that it unexpectedly and uncharacteristically became a high-profile and awaited release from the big N. Metroid has always been a niche series so seeing it hit big like that was something to behold.

I started to dread (ha!) that the game might not be able to deliver on the hype that had built up. That the 'second-coming of Metroid' I became so invested in would end on a big dud. Thankfully, the game delivered. The game perfects the MetroidVania formula the original

while, smartly, making the game accessible to newcomers while not compromising on Metroid's identity. It addressed problems I had with the previous Metroid games, like the improvements to how it tells its story and has high production values and an almost frightening amount of details. Players are still finding new details in this game to this day!

Above all else: I had a lot of fun with it. Dread ate up all my attention for two whole glorious weeks in October. I truly had that 'I wish I was playing ... game' right now. It was engaging, exciting and pushed me as no game has done in a while. Truly an outstanding game.

Yet, there was one game that I enjoyed even more than Metroid Dread. The massive undertaking was The Witcher 3: Wild Hunt Complete Edition for the Nintendo Switch.

I knew how lauded this game was so when a Switch port was announced, I kept it in the back of my mind. After seeing season 1 of the Netflix Witcher I decided to actually buy the game. That was in early 2020, not 2021. However, due to a variety of reasons, I didn't have the time to commit to it until 2021. And commit to The Witcher I did. I finished the base game, The Wild Hunt, as well as both its expansions, Hearts of Stone & Blood and Wine. I watched both seasons of the show, read all but one of the books and checked out some of the comics as well.

You see, that's why this game is nr. 1. Aside from just being an excellently crafted game in a living, breathing world with amazingly written stories and characters, The Witcher 3 is an experience unlike any other. It is the fantasy epic in video game form I never thought possible. One that felt like I wasn't just playing a game, but playing through an epic. I never got into Harry Potter or Lord of the Rings but with The Witcher 3, I think I finally think I know how they feel about those IP's.

The Witcher 3 isn't just an experience I'll never forget, but one that lead to many more experiences this year. For that, and the quality of the game itself, of course, it's my Game of the Year!