It's time for adventure! 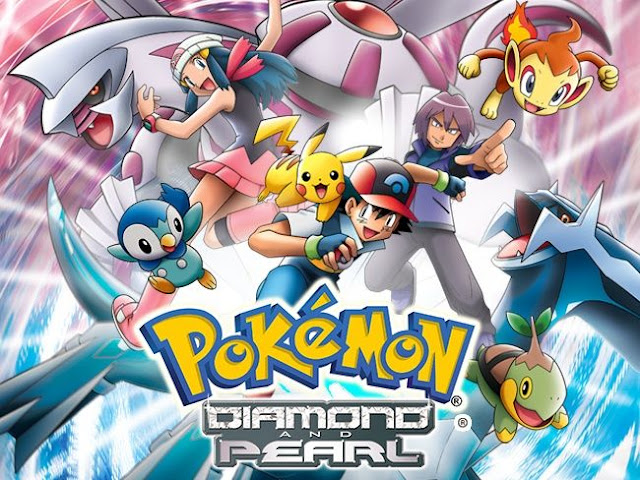 A few months ago, after finishing the season on my 'one-episode-a-week' schedule, I reviewed the latest season of the Pokémon anime. Pokémon Journeys. Reviewing TV isn't something I do often but with Pokémon Journeys, I had something to talk about. And it seems that you all really liked it. With that in mind, why not tackle another season? Pokémon Brilliant Diamond & Shining Pearl and Legends: Arceus has put the focus back on Sinnoh so why not take a look at the corresponding anime? Should be fun especially since it's the season I stopped watching the series regularly, dropping out completely in the switch between it and Battle Dimension.

Without further ado, let's dive into the first season of the Diamond and Pearl series and see what it brings to the table!

After his defeat in the Hoenn League, Ash Ketchum decided to try his luck in Sinnoh. The journey starts far from smooth though as an attack from Team Rocket separates Ash from his Pikachu. Luckily though, Pikachu is found by new trainer Dawn, an aspiring Pokémon Coordinator, and here Piplup. Together with Dawn and his old pal Brock, Ash sets out across Sinnoh to win 8 Gym badges, participate in the Sinnoh League and become a Pokémon Master!

Going from Journeys to a 'traditional' Pokémon series is quite a contrast and I'm not just talking about the animation differences nor the switch in the story structure. It's more a realization of how the entertainment industry and the purpose of the anime has changed in the last 15 or so years.

First off: the role of the internet. Nowadays when you want to know something you just look it up on the Internet. Even children now how to Google pretty effectively. Back in 2007 this wasn't really the case. As such Diamond & Pearl has quite a few moments in which they use an episode to not just promote an aspect of the games but to educate the audience on how it works. The Pokétch for example get an entire episode dedicated to its innerworkings.

Diamond and Pearl series is also much more 'kiddy' than I remembered it. Or, more accurately, I didn't realize how much the 'for kids' banner has changed over the years. The current era of TV has had, and still have, programs that tackle more mature subjects. Even if Journeys isn't a Steven Universe, seeing Diamond & Pearl, the growth of the Pokémon anime in this aspect has become suddenly clear.

Does this have anything to do with the quality of the show? Not really. Diamond & Pearl might lack that level of maturity but that's not to the series detriment. It's a very enjoyable series that has lots of strengths. Take the characters for instance. Ash is Ash, impulsive and battle-ready as ever, and thankfully hasn't become a caricature of himself just yet. Brock is, well, Brock and while I can't get a good feel on Dawn's character just yet her journey is shaping up to be a very interesting one. More so then with May in the Advanced series, Dawn is also an opportunity to be the eyes of the new audience and put Ash in the role of the well-seasoned trainer but that's not what I meant.

In her first season, it's already clear that her journey to become a Pokémon Coordinator is going to be a bumpy one. What is clear of her character, aside from her friendly and open nature, is that she struggles with confidence. Early on in the season she constantly looks to her mom, and to some extent others like Zoey, for confirmation and approval for her choices. Later on, she becomes more confident but her losses also start to pile up. This streak of losses hasn't reached a breaking point, yet, but it is clear that it will. Seeing how Dawn will react once this breaking point is reached is something I look forward to as it will no doubt make for some very interesting television.

The story of the series isn't anything special for Pokémon. It adheres to the old fashioned structure but that isn't a bad thing. There are still plenty of fun one-off's, those episodes that put a character or a Pokémon at its centre with the plot-heavy episodes coming around for the excitement. I enjoy the one-off's, but the story episodes are my favourite. That's often where the real meat of the narrative lies. This structure can get predictable for a long time viewer but I think it's a fair trade-off. You always know where the spectacle is and it's not like the plot-heavy episodes are exclusive to these moments.

Animation wise, Diamond & Pearl is up to snuff. It's the last season that uses the general style introduced in the original series but with a lot more polish. It's clear that the show, while still 2D, is no longer hand-drawn. Watching it all these years later it has clearly aged, it's no HD, but that's not a problem at all. Young kids won't mind and I find it quite charming. Something I also noticed in the animation department is the show is starting to incorporate 3D animations with the 2D. I could be wrong about this series is the starting point but it has started to integrate 3D with 2D. A lot of the Pokémon moves are 3D animated. It works for the most part but there are some moments here and there where this 2D/3D integration just doesn't work. The Combee is my best example of this.

Pokémon Diamond & Pearl: the series is a fun and good season of the Pokémon anime. It's a well made and fun series about Ash's journey in the Sinnoh region. It's nothing special, doesn't bring anything to the table for the anime really, but there are some things here that more seasoned fans will no doubt find interesting.

If you want to watch an older season of the Pokémon anime or want to give a kid more Sinnoh now that Brilliant Diamond & Shining Pearl have been released then Diamond & Pearl the season is a good one to watch.