and why I’m hesitant to buy it. 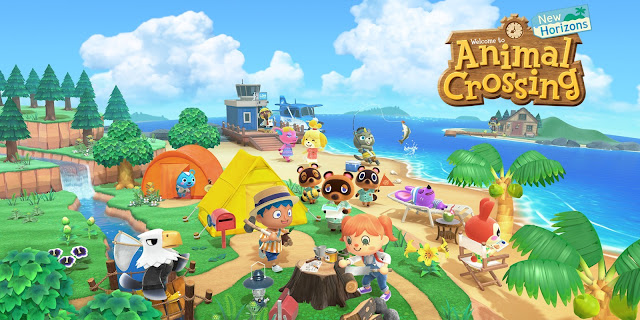 So about a month ago, from when I'm writing this that is, the newest entry in the Animal Crossing franchise finally hit the Nintendo Switch and the game has since taken the world by storm. It has been selling out eerywhere and social media is positively abuzz with Animal Crossing posts, GIFS and memes. People who don't usually play these type of games and even people who don't play games at all have made the dive and now playing and enjoying the game. This unprecedented level of success is mostly the result of the world current affairs.

The Corona pandemic has forced many people into spending their days at home and are looking for ways to get through this period. Animal Crossing, as a life simulation game, benefits from this situation by providing people with the perfect escape. Up to release, I was thinking about buying the game as well. I played Animal Crossing: Wild World on the DS way back in the day and I remember enjoying it. However, now that the game has released I find myself hesitant to actually buy the game even though it has been critically acclaimed by critics and so many others around me are enjoying. This has one simple reason: Animal Crossing isn't like other games, it's like a commitment and one that I currently don't have time for.

Animal Crossing is a game that's meant to be played in small chunks every single day. You pop it in, do some fishing, collect some bugs, sell some turnips and place the game down when you're done and come back later to do it all over again. It's a very relaxed game that lasts as long as the player wants as it doesn't have a definitive end. It features a real-lifetime system, with the game keeping track of the real-world calendar which the game's mechanics are directly tied into. It takes several days for a tree to grow for example and certain events like the resent Bunny Day only appears depending on the exact date. It's this exact same model that is hindering me from playing it, or more accurately, the penalties that come along with it.

For starters, if you don't boot up the game for a few days, the weed starts to grow over the entire island. This means if you don't have time to play for even a few days, which is highly likely in my case, you're left with a lot of boring and tedious clean up to do. This is a mechanic meant to both punish cheating and to motivate people to keep playing but it can also be very off-putting. The longer you're unable to play, the less enticing it becomes to play and knowing that I won't be able to play it regularly there will be hours of boring weed-pulling ahead of me and that is keeping me from buying the game. Besides that, it also means that it will take longer for me to achieve certain tasks, to get to a point in the game where you're offered more freedom and get better interactions with other players.

The question that might pop in your head when I say that I don't have enough time to play the game is why don't I just time-travel? Why not change the internal clock on the Switch to speed up certain tasks and activities so you can get to a point in the game where you have a lot more freedom and can play with others on a similar playing field? Because that would be cheating and I don't play games to cheat. Doing that will make your achievements in the game ring hollow. You got the thing you wanted, but without really putting in the effort.

Animal Crossing doesn't have an end, it's all about the journey and by cheating the system like that you make this journey, and by extension the game itself, meaningless. If you fine with playing the system like that, go right ahead I can't dictate how you play your games, but that isn't the way Animal Crossing is designed to be played and I know that wouldn't give me a satisfactory experience.

Lastly, I don't think I'll buy the game any time soon simply because I've got a lot of games on my backlog. I just know that if I get Animal Crossing I will end up spending many more hours into the game than I intend. That's how it was with Animal Crossing: Wild World and that how it would be this time as well, it's how strong the pull of these types of games are on the right audience. While there are many people out there who buy a game, play it for a few hours and then never look at it again and move on to the next game without feeling the need to play it ever again.

I'm not one of those people. When I buy a game I intend to play it till completion. I paid good money for it and letting it sit on my shelf unfinished for the rest of time would be a waste of money and an insult to the people who dropped blood, sweat and tears into making it. That's how I feel at least. So buying a massive time-sinker of a game while I have half a dozen or so games still on my backlog is a definitive no-go.

So if you're Nintendo gamer like me and if you haven't bought Animal Crossing: New Horizons even though you had intended to, these might be some of the reasons why. The game is a massive time-sink, a simulation game meant to escape the world and filled with tasks meant to last forever and keep you playing just almost just as long. It's this exact reason why you haven't, you simply don't have the time necessary to sink into the game to make it a worthwhile experience and justify the purchase or you might be discouraged by the penalties the game has when you find yourself unable to play for a while. But maybe, just maybe, you find yourself having the time again soon, indulge yourself and get lost in the world of Animal Crossing because that is just the type of game it is.

I did eventually cave under FOMO (Fear Of Missing Out) and bought a digital copy of Animal Crossing: New Horizons. I even wrote a review on it, which you can check out by clicking the link.
Article Gaming Nintendo