Striking out on your own. 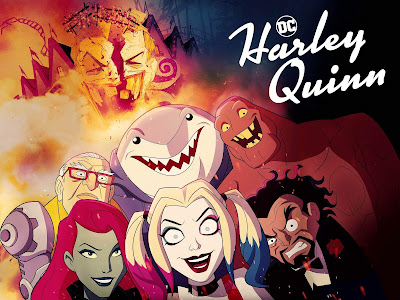 The character of Harley Quinn has become quite popular in the last decade or so. She has first introduced in Batman the Animated Series in the '90s where she was created for just a one-off appearance. The creators of the show liked her so much they started using her more often, giving her the backstory of being the Joker's girlfriend and giving her many of the defining aspects the character still has. She proved popular with fans as well and she made the jump to comics, where she steadily grew more apart from the Joker and remained a fan-favourite for many years. It wasn't until Margot Robbie portrayed her in the Suicide Squad movie though that the character really took off and gave rise to her current popularity in the mainstream media.

The Harley Quinn animated show, which is streaming now on DC Universe, was greenlit as a response to Harley Quinn's current massive popularity and with its distinct R-rating aims to show aspects of the character that you wouldn't get away with in a PG-rated movie. The show is currently in its second season and from what I've heard people really seem to enjoy the show, calling it both very smart and very funny. With such praise online, I decided to check out the first episode of the show and see if it earned the praise it has gotten.

The first thing I immediately noticed when watching the show is that they are really pushing the R-rating. The very first few sentences that are spoken are filled with swearing and the entire opening sequence is filled with gratuitous violence, blood and gore. The entire episode is filled with this, though kept a bit more low-key in comparison to this opening segment. It feels like the creators wanted to show the world that this isn't children show and they made that clear alright, though I feel this is also immediately the shows biggest problem. I'm not against more mature content, but I feel that Harley Quinn packs so much, to a point unnecessary, swearing and blood that it actively made me uncomfortable. This won't be a problem for everybody of course, but I feel it will turn people away from watching the show which is kind off a shame as the rest of the episode was really good.

The plot of the pilot episode revolves around Harley breaking up with the Joker and learning to stand on her own. While at the beginning of the episode she is still his loyal girlfriend, after beings sent to Arkham and under the influence of Poison Ivy she slowly starts the question her relationship with the Joker. She finally comes to the realization that the Joker doesn't care for her after Ivy forces her to remember who she used to be with a picture of Harleen Quinzell after which they go and confront the Joker to tell him it's over.

This is the moment when the episode plays it smart. The relationship between the Joker and Harley has always been a representation of real-life toxic and abusive relationships and the episode smartly chooses to show how hard it can be for the abused to break off from the toxic party. With only a few words, Joker manages to manipulate Harley back into his corner praying on Harley's insecurities. It isn't until a Joker has to choose between her and dropping Batman in a vat of acid and he chooses to save Batman that she finally manages to break for Jokers spell in a rather impressive segment. Earlier on in the episode, Harley tells Ivy about Joker having proposed to her which is shown in a fantasy sequence. When Harley gets dropped in the 'acid' she thinks back to this sequence, where the shine and glamour are slowly peeled away to reveal what acutely happened and the sentence 'till death do us part' takes on a whole different meaning. The episode ends with setting up, what I assume, the plot for the rest of the season. Harley Quinn announces her intentions the become the number 1 supervillain in Gotham.

The story of the first episode is good. It sets up both Harley Quinn as a character, who she is what her goals and motivations are and the world around her. The kind of City this version of Gotham is, her relationship with Ivy and what kind of character she is in this show and much more. When looking at the world, it seems that the show remains pretty faithful to who these characters are at their core but they have been adjusted to fit the shows more humorous yet simultaneously also darker tone. Oh, and for those of you wondering the first episode makes it clear that Harley and Ivy are very good friends, but there are no signs of any romance between the two like there has been in the comics. From what I've heard about the rest of the series, you'll have to wait until season 2 if you're interested in that aspect of the characters.

One of the most important aspects of Harley Quinn as a character is this humour. I'm happy to report that the show hasn't forgotten and this first episode is full of jokes is full of them. From larger and elaborately set up jokes to ones that are so quick you might not catch it in your first sitting. The jokes aren't only about the usual superhero fare as you might expect but they are quite a lot of jokes that don't rely on prior knowledge of these characters or superheroes in general and I found that quite interesting.

Being on DC Universe, a relatively small streaming service, I had some worries about the shows overall quality. While I personally enjoyed Young Justice season 3, the streaming service other animated show I could clearly see the limitations the show had when it came to the budget. The quality of animation was clearly a step down from its previous season when it was still on network television and the show's characters were clearly voiced by a, rather talented I do have to admit, a small number of voice-actors. I don't know if Harley Quinn was given a higher budget or if they're better at budgeting overall because I didn't notice such things in this show at all. The animation is vibrant, fluid and is quite beautiful in certain instances and the voice actors all turn in a good performance.

A stand out is definitely Kaley Cuoco as Harley Quinn and while she wouldn't have been my first choice for voicing the character, I have said that after hearing her performance I kind off thinks she is the best voice the character has had. Harley Quinn has always been portrayed with a high pitch voice and that tends to become very grating over time. Kaley's Harley Quinn has a high voice certainly, but to a much lesser extent than others which make her voice much less annoying and easier to understand. Besides that, her comedic timing is also on point and her chemistry with both Lake Bell's Poison Ivy and Alan Tudyk's Joker.

Having seen the first episode, twice, I can definitely see why people have been praising the show. Harley Quinn seems to be a smartly written, well-acted and well-animated show that is well worth your time. It has a good understanding of Harley Quinn as a character and the world of Gotham and uses this to its advantage by crafting a very comedic and fast-paced world while also being able to tackle serious issues like recognizing and breaking away from a toxic relationship for example. However, the show is also very much for mature audiences only. The show has a high amount of gratuitous violence gore and swearing to the point it made me uncomfortable. If you're just like me in that regard, I wouldn't watch Harley Quinn or at the very least skip through those moments.