After the release of Chilling Adventures of Sabrina on Netflix, Archie comics have been gradually been pushing Sabrina Spellman in their comics. She has become Archie's new girlfriend over in the main Archie book and got a new comic series of her own, which is what we're looking at today.

Sabrina the Teenage Witch is a 5-issue mini-series that is an extension of sorts of the current Archie version. Sabrina's design is the same as in that comic with the art style and tone of the run also clearly emulating that of Archie. The two Sabrina's aren't the same however, the series isn't a continuation of Sabrina's story on Archie. It takes place in its own little bubble. The series has no connection to The Chilling Adventures of Sabrina either. It does borrow some elements from the series, aunties Hilda & Zelda designs have been very clearly inspired by said series and have also taken over some their characteristics for instance. Some environmental and character designs are also meant to invoke the series and by extension, the comic that series is based on, but that is about it. For the most part, the series does its own thing.

Enough about the series connection to other Archie and Sabrina works, let's get into the run proper by first talking about the story. The first issue kicks off with Sabrina's first day at school after she and her aunts moved to Greendale. Her first day at school goes how you would expect. She has her first run-in with her eternal love interest Harvey Kinkle, meets the handsome Ren Ransom and his sisters Radka and makes a friend in the bullied Jessa after standing up for her (and getting into detention for the effort). The day is rather normal for Sabrina, until after she and Jessa get out of detention and is attacked by a wendigo-like creature in the woods. If that wasn't enough a giant squid monster appears almost immediately after. Sabrina manages to survive both attacks and get the gang to safety by the skin of her teeth. After getting back home, she recounts the squid encounter to her aunts, who with a spell figure out that whatever the creature was, it wasn't magical.

These are the two main plot threads of the series: the mystery behind the non-magical monster and the love triangle Sabrina finds herself in. In other words: it features a conflict in both Sabrina's worlds, the magical and the mundane, just as you would expect. The book plays it smart with both sides of her identity by letting both worlds regularly intersect. The appearance of the monsters are linked to her high school and both Ren & Radka are under the influence of some curse meaning both worlds have a worthwhile connection to the other. This approach prevents the two storylines from feeling disjointed as well as hammering in that Sabrina is a child of both worlds.

When it comes to Sabrina as a character this version falls in line with what I know about her. She is a somewhat typical teenager with a good sense of right and wrong who has to juggle a life in two different worlds which are the source for a lot of both happy and bad experiences. Her character here is definitely not the same as the Chilling Adventures of Sabrina one. She remarkably less entitled or confident and is more awkward and a bit of a loner. This isn't a bad thing really, as she is more likeable then that version and it fits the book's tone.

Interconnecting the two worlds leads to moments of character study and (slight) growth. In the first issue, Radka is introduced as the typical beautiful mean-girl, but we start to learn more about her throughout the 5 issues that add layers and make her a much more sympathetic character. Her brother kind off has the opposite happen to him. Throughout the series he becomes somewhat less sympathetic as some of his lesser qualities start to show through.

Sabrina herself largely remains the same throughout the mini-series. She doesn't have that much character growth but she does get more confidence in herself throughout. An example of this her hair colour. While most integrations of Sabrina over the years have shown her with blonde hair, it was originally more of a platinum blonde. In recent interpretations such as this one, it has evolved to being just a stark white. She uses a magic spell at the beginning over the series to change her white hair to blonde as she's afraid to stand out and get picked on.  The events on the magical side of life and her interaction with Harvey gives her the confidence to let her hair  white.

The hair story reminds me of an something in the series that I find a bit odd. Every single spell she does is accompanied by a number, reminding the audience how many times Sabrina has used her magic throughout the series. When she first does this it's implied that Sabrina will face some repercussion for here overuse of magic, but this never comes. She keeps using her magic throughout the series but apart from one instance in which she tries to use two spells in rapid succession there are no real consequences. Giving the spells a number and a unique little text box is a very nice touch but the lack of any real consequences makes me feel that they're a leftover from an abandoned plot-point.

The tone of Sabrina the Teenage Witch is pretty light and humorous, but one that does allow the opportunity for some heavier subject matter and one that has a focus on character work. The tone is light because, well, even in the darker moments it never becomes outright depressing but it does convey the danger and tension well. It's kind off hard to explain in writing, but after you've read an issue or two you'll understand.

The series features a handful of humorous moments which work very well if you ask me. Instead of going for a series of gags it instead includes the humour in small moments supported by dialogue and art. For example, the goal of a scene is to showcase Sabrina being nervous about her aunts or Salem finding out what she's been doing and scold her, but its made humorous by the artwork and facial expressions of both Sabrina and Salem. A nice little bit of humour to make you chuckle. Said art duties are shared by Andy Fish, Veronica Fish & Jack Morelli and they do a fine job. You can see the difference in style between the three artists, but they're close enough to each other that the difference isn't jarring. The series also uses these changes to its advantage by letting dividing the different artists between the mundane and the magical so you could also see it as an artistic choice giving the two worlds a subtle division.

Kelly Thomson's writing is also up to the task. There is a lot of inner dialogue for example which could feel boring, but it always feels natural and you understand her reasoning. Besides that, the characters are all giving a certain sense of depth as I talked about earlier with Radka that is very appreciated and the story itself is well-paced and well-executed. If there was one criticism though is that when it comes to the villain he's pretty weak and predictable, but it does lead to a cool final showdown. This showdown, and especially the lead up to it, is my favourite part of the mini-series. Not only is the build-up to it, with Sabrina deciding to go she isn't going to wait any longer and preparing herself for the fight, but the artwork here is something else and the design of 'powered-up' Sabrina is amazing and I hope this design gets used more in the future.

Sabrina the Teenage Witch is a good mini-series. It takes aspects of some of the more recent interpretations and melds them together in its own bright yet 'real' tone. The story is supported very well by its artwork and writing and overall the series is just very enjoyable. It has good character work, especially in Sabrina herself and interesting and layer characters like Radka but most importantly it's just a very enjoyable series to read. If you liked Sabrina's appearance over in the main Archie book, have met the character on Netflix like me you'll find something to enjoy here and I thoroughly recommend the series. 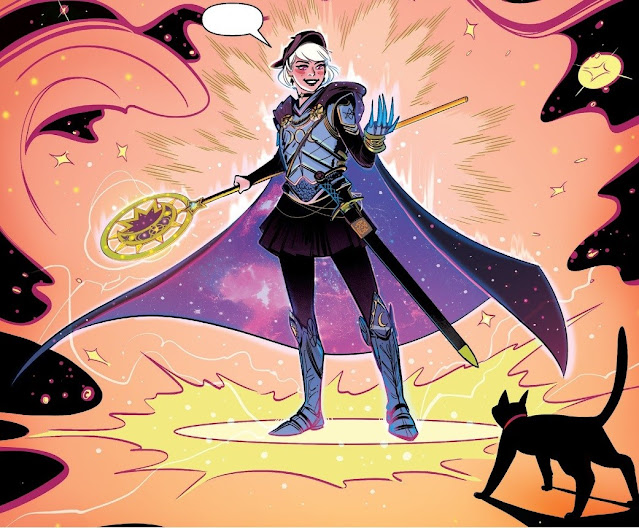