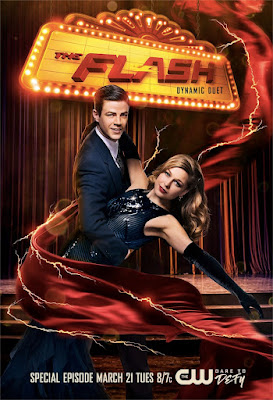 From all of the crossovers that the CW superhero shows have done, The Flash episode 'Duet' has to be the weirdest and most unique. Unlike what you would expect from a crossover there is no world-ending threat to be found. Instead, The Flash and Supergirl come together for a musical outing. Why you might ask? Because it's something that the cast and crew of both shows just really wanted to do. You see, many members of the cast, and this extends to the other 'Arrowverse' shows as well, have a background in music and theatre. Both shows main leads, Grant Gustin and Mellissa Benoist have also starred in Glee and it's this connection that started the ball rolling for this musical crossover to actually happen.

The plot of the episode is very simple and straightforward. Both Supergirl and The Flash get put in some sort of dreamworld by the episodes villain the Music Meister, played by Darren Criss yet another Glee actor, which is set up entirely as a musical. The only way to escape this world is for Barry and Kara to follow the script and make it to the end while staying alive along the way. The plot itself is rather predictable and there is no real conflict to be found for our heroes. Barry even remarks during the episode "that everything really is so much easier in musicals", but the plot of the musical isn't really meant to be very interesting. It's just an excuse to have the musical elements within the episode and its more about Barry and Kara interacting with each other and the characters in the musical that is the episodes focus.

There some smart writing on display here in how it uses its unconventional setup to still move the plot of both shows forward. Both Barry and Kara are experiencing some troubles in their love life and the show uses the musical as a way for them to self-reflect on these problems. By seeing the musical equivalent of their romantic partners be in love with each other in a very Romeo & Juliette like fashion they start to reevaluate the relationship they have with them. It's a smart way to give the episode some relevance in the greater story of both shows and also keeps the musical and real-world stories from becoming too disjointed.

Speaking of the musical elements, the episode pulls manages to pull these off very well, much better than I anticipated even. The episode pays homage to musicals like 'singing in the rain' by featuring a 1950's aesthetic for the dream world complete with gangsters, top-hats and accents. From the costumes to the sets to even the way the dreamworld is filmed, it all adds up to create a very convincing and good looking 1950's world that helps to make the episode more distinct. From the 5 of songs featured in the episode, 4 are original compositions and they are all great. From Mellissa Benoist's beautiful rendition of 'Moon River' to the episodes namesake duet in 'Super Friend' the music is quite good. The quality of the singing and the choreography of the accompanying dance routines are all top-notch, the episode makes full use of the singing and dancing abilities of its cast. All of this results in the musical aspect of the episode really coming together to form a very fun bit of musical goodness.

The music is great, but where the episode truly shines is the performance given by both Grant Gustin and Mellissa Benoist. From the chemistry they have, to Mellissa's energy and Grant's body language, watching these two is an absolute joy. These elements are what make this episode truly memorable and their performance of 'Super Friend' is the highlight of the entire episode. The rest of the cast put in an admirable performance as well. Most of them have double performances, as both their regular character and as a completely different character in the musical world. For most of these actors their screen-time is rather limited, a song and a scene here or there, but for the time they are on screen they are very fun to watch.

If you'd ask me what the episode's flaws are, I would definitely say the real-world story. While roughly 70% of the episode takes place within the musical dreamworld, the episode occasionally cuts to the real world. It's not that these segments are bad persé, but I don't think they really add much to the episode other than helping setup its, rather rushed and cliché, ending. The best part of these segments is the fight between the Vibe, Kid Flash, Martian Manhunter and Music Meister. It shows off a nice bit of strategy and teamwork between the heroes supported, but it didn't last long enough to really make an impact.

Duet is an enjoyable and fun musical episode that features a well-realized 1950's aesthetic and very catchy tunes whose greatest trump card is the performance and chemistry of its main leads. It is by far the most fun and entertaining crossover in the entire 'Arrowverse' to date and I can highly recommend it to anyone interested in musicals, superheroes or people who just want to watch something fun and enjoyable.