Review: The Falcon and The Winter Soldier

The legacy of that shield is... complicated. 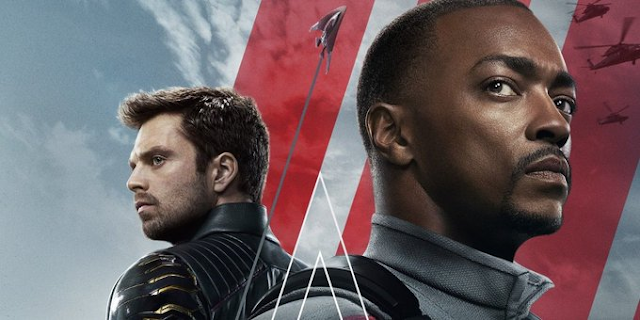 The Falcon and The Winter Soldier is the second MCU limited series to hit Disney+. It started its run only two weeks after the end of the last MCU show, WandaVision and is much more in line with the general style and atmosphere of the MCU. Saying that it’s just ‘plain Marvel’ or ‘Marvel light' would be a disservice, however. There’s still plenty of the MCU’s trademark style and humour to found here but that’s not what makes this show as great as it is. The series uses its place as a streaming show to tackle subjects that MCU, and even Hollywood, rarely touch and isn’t afraid to dig into them. It’s this subject matter, alongside great writing and stellar performances, that truly makes this show something else even if it doesn’t always stick the landing.

The Falcon and The Winter Soldier picks ups about 6 months after the events of Endgame. While Steve gave Sam the Shield and mantle of Captain America, Sam is doubtful that he’s capable of being Captain America. To live up to that legacy. After saving a kidnap army intelligent officer as The Falcon, Sam gives the shield to the Smithsonian and its Captain America exhibit. After this, he travels back to his hometown in Louisiana where he tries to help his sister with her financial troubles. While Sam had a sound plan to get his sister a loan, the bank rejects his proposal which is strongly implied to be because of skin hue.

Meanwhile, Bucky has been pardoned by the U.S. government for the crimes he committed under brainwashing as The Winter Soldier. The only mandate is that he attends weekly therapy meetings. While technically ‘free’ he’s still struggling with guilt and frequent nightmares. Not even his attempt to make up for his wrongdoings by taking down people he helped to power as The Winter Soldier While being informed by his contact in the Air Force, Joaquín Torres about the growing threat of the anti-nationalist group the Flag-Smashers, Sam (as well as Bucky back in NYC) witnesses the government unveiled a new Captain America angering both men.

The story of The Falcon and The Winter Soldier, the writing, alongside the performance of the actors is what makes this show so great. The show has its problems, sure, but it pales in comparison to the show’s strengths. Like I said in the opening, this show tackles some heavy subjects and doesn’t hold back its punches either. In episode 2, for example, Sam and Bucky have an argument while walking in a neighbourhood where he’s stopped by a bunch of white cops one of which nearly pulls his gun on him. That’s right, this show went there and it’s not an exception either. It’s this kind of writing and storytelling that sets this show apart from its peers and makes it that much better while still providing the action and humour you’d expect from the MCU.

The acting is another one of the show’s strengths. Anthony Mackie does a great job as Sam Wilson. In portraying both his doubts as well as his inner strength and the large amount of empathy the man has. Honestly, though, I feel that his performance is overshadowed by some of the other players. Sebastian Stan gets some very strong and emotional scenes that have ingrained themselves in my mind. Wyatt Russel turns in what could be the performance of a lifetime as the very complicated and layered John F. Walker the new government-appointed Captain America. Daniel Brühl as Baron Helmut Zemo steels every scene he’s in. I mean, there’s a reason why ‘release the Zemo Cut’ became trending on Twitter.

Talking about those problems, there are two that are worth diving into. Coincidentally, these are flaws that are shared by its sister show WandaVision. There are pacing problems throughout the 6 episode run and the final doesn’t quite stick the landing. The pacing issues is something that, to the show’s credit, is less noticeable when watching the show week to week. That some episode is much slower than others is noticeable, but the problems this pacing causes becomes apparent when you binge the show. As some episodes move so much faster or slower than others, you create a very weird flow, a 'peaks and valleys' effects.

It’s this pacing problem that causes the final to be somewhat underwhelming. This show covers a lot of ground on a variety of subjects and characters. From racial tension and mental health to Sam, Bucky and John Walker. Due to, in big parts, the weird pacing of the show it has to resolve basically every single one of its threads in the final episode. This leads to a final that has to resolve a lot in not much time which means that there isn’t much time for the episode to linger. Due to this, most of the wrap-ups are rushed and don’t have the impact they should’ve had. It’s still a satisfying wrap-up with some very strong and emotional moments but on the whole, it could’ve been better.

Before wrapping this review up, some quick mentions to other aspects of the show such as the action, CGI and whatnot. The production values of The Falcon and The Winter Soldier is high. From the costumes to the set design and even the CGI, it’s all great and the attention to detail is applause-worthy. The music is also very good. From choosing appropriate songs to incorporating and remixing the already pre-existing themes such as the Winter Soldier theme. The closing credits, Louisiana Heroes, is a definite standout and I recommend you stick around for it.

With The Falcon and The Winter Soldier, Marvel is 2-for-2 with its Disney+ streaming shows. This show not only provides plenty of that MCU trademarked action and humour, while also providing plenty of mature social commentary. It’s well written, well-acted and highly enjoyable even if it doesn't quite stick the landing. The Falcon and The Winter Soldier is one Disney+ show that everybody should watch.
Marvel MCU Review TV/Movies