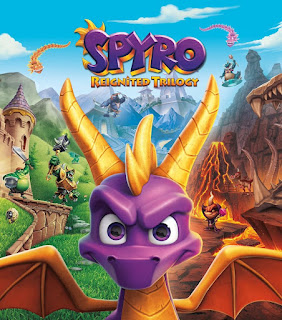 Over the last few months, I’ve been gradually reviewing all of the original three Spyro games. From Spyro the Dragon to Ripto’s Rage and Year of the Dragon. I reviewed them all. And now it’s time for the collection/remaster that I got all of the games in. The Spyro Reignited Trilogy. Just as I did with Super Mario 3D All-Stars, this review will focus on the collection itself. Not the games within it. I will talk about them, yes, but the focus will be on the collection as a whole. How do these games run? What are some of the improvements made? What are the extra goodies that are thrown in?
Alright then, with that said, let’s dive in and see if Spyro Reignited Trilogy is a worthy remaster. Spoiler: it is.

Following the trend set by its predecessor, the Crash Bandicoot N’Sane Trilogy, Spyro Reignited Trilogy is not just a collection of the original three Spyro games. It doesn’t just pick the original PS1 versions of these games and bundle them in for modern consoles. No, all of the games have been completely remastered. Much improved, modern visuals. Better control schemes, bug fixes and adjusted camera control the whole shebang. Remasters of older games are fairly common in the industry but putting three of them in a single, 60,- package isn’t. The value of the Reignited Trilogy cannot be understated in this regard.

However, when you’re playing on the Nintendo Switch like me there is a caveat. The physical Switch version only includes the original Spyro the Dragon game on the cartridge. The other two games need to be downloaded to be playable. It’s unfortunate. It’s a decision I don’t understand as there are Switch cartridges out there with enough storage for all three games. There’s sadly nothing you can about that. You just have to make sure that you have the required space free on your Switch’s internal memory for Spyro 2 and 3.

With that little caveat out of the way, how’s the presentation of Reignited Trilogy? In short: pretty nifty. When booting the game up and getting through the loading screens with a larger version of the box art behind it, you’re brought to the start screen. From this screen, you can get to the three games in the collection. These games are represented by the game’s logo, a render of Spyro in the same pose as on the game’s original art, an image and the name of the level you last saved in as well as a percentage meter telling you the full progress of that game. It’s a minimalistic yet colourful approach that tells you everything you need to know. Other, smaller details, like the unique background music and the background itself changing colour depending on which game you played last are quite neat as well.

When playing each game, other changes have been made as well to make the entire experience more convenient. By pressing the correct button, the + and – minus buttons in the case of the Nintendo Switch version, you get to the revamped pause menu. You can now lookup the controls whenever you want. Go to previously visited levels through a simple click of the button and get much more information about your progress in each level. All in the same style as the opening screen with gold lettering this time. Does make the menu’s a bit hard to read sometimes though so be wary of that.

The complete visual overhaul is clear to see to everyone but theirs is more. The camera and its controls were a consistent criticism of the original three games, which has been fixed in these new versions of the game. You can now control the camera freely and easily centre it behind Spyro. The controls themselves have also been adjusted to match more modern control standards. If you grew up with the original PS1 games though, you can change them to be the same as the originals. The voice acting has also been completely re-recorded keeping the voice actors behind each title consistent as well as resulting in better audio quality.

The last thing about the collection that needs addressing, aside from the three games themselves, of course, is the load time. The load times are long. Undoubtedly. From starting the game to the aforementioned start screen it usually takes around 1 minute of waiting. When transitioning between screens in-game, you’re looking at around 20-25 seconds of loading. Worse, this type of load screen has some serious lag to it. How can there be lag during a load screen? Because in-game load screens feature Spyro flying the background (which you can control slightly) to give gamers something to look at. Now, this is mostly more of a problem on the less powerful Switch then it is on the PS4 and the Xbox One but that is the version that I’m reviewing so it's something that needs to be mentioned.

That only really leaves me with the games themselves. Spyro the Dragon, Spyro: Ripto’s Rage and Spyro Year of the Dragon. As stated in the opening, I gave each title its own separate in-depth review that I implore you to check out. In short though: these are three very good games. They are the traditional, classic Super Mario 64 style 3D platformer at its finest. You run and jump across multiple colourful worlds trying to save the day all the while you beat up bad guys and hunt down every last gem that’s scattered throughout each level. The first game is the most basic but also the most relaxing of the three. Ripto’s Rage is the beefiest of the three but does overstay its welcome near the end. Year of the Dragon is an almost perfect combination of the first two games though doesn’t really add anything of value to the series beyond the multiple characters gimmick.

Spyro Reignited Trilogy is the definitive way to play the original three Spyro games. Each game has been updated making them look stunning and sound stunning with improved controls to boot. The presentation of the collection is well done and the added features make playing the games more convenient to play. It’s not a perfect collection, the load times are long on any platform you play it on with the Switch being the worst offender. There’s some lag during transition screens as well and the games do have their own individual flaws and nit-picks. These drawbacks are only minor however and don’t amount to much more than annoyances. If you want to play the original Spyro trilogy, or just a good Spyro game or 3D platformer in general, then Spyro Reignited Trilogy is the game to pick up.