Heroes Reborn for a new age AKA the 90's. How could that possibly go wrong? 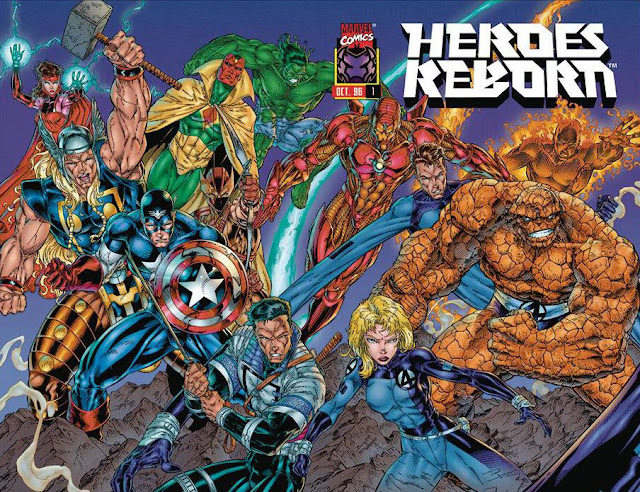 Next month, Marvel’s latest event will kick off: Heroes Reborn. It's an event that sees the marvel universe reimagined with The Squadron Supreme, Marvel’s answer/parody/knock-off of the Justice League as the premiere heroes. An interesting premise, if you ask me. From the promotional material, I think Marvel has merged their own classic stories with Justice League elements in a clever and fun way.

This isn’t the first time that Marvel has an event called Heroes Reborn though. From 1996-1997 the original Heroes Reborn saw publication. It was an event that was quite different from what Marvel had done before. Both in how it was produced and what in purpose. In essence, it was Marvel's attempt at rebooting their less popular characters. An attempt that ended up being quite a disaster for the company.

A company desperate for a hit.

The late-90’s were not a good decade for Marvel comics. The bubble that was the comic book speculative boom had popped and the company got hit hard. While Spider-Man and the X-men were still doing well and were profitable the rest of their IP’s were not. The situation was bad enough that the company was inching closer and closer to full-on bankruptcy every day. In an attempt to turn the tide, the head-brass decided to take a page from their rivals over at DC Comics.

While Marvel’s continuity had remained one-and-the-same ever since the start of the ‘shared-universe concept, DC had re-started on multiple occasions. The big idea behind these reboots is that the decades of continuity is a turn-off to new readers and the reboots would simplify things. They have also been commercially successful so Marvel doing a reboot of its own could be exactly what the company needed. What Marvel didn’t want, however, was for this reboot to hurt the series that were doing well. They didn’t want to potentially lose their X-Men and Spider-Man readers because they didn’t enjoy the rebooted versions. Instead, Marvel decided to do a half-reboot. To only reinvent their failing characters.

Another decision that they decided to make was to outsource the reboot. One of the hits Marvel took in the ’90s was the exodus of star talent. Todd McFarlane, Jim Lee and Rob Liefeld left Marvel to start their, creatively own, comic publisher: Image Comics. Image Comics quickly became a strong player within the comic industry and I can only imagine Marvel hoped that some of that success would rub off on them. They hired Jim Lee and Rob Liefeld to give these characters a fresh coat of paint. Jim Lee’s subsidiary WildStorm (Image comics was made up of subsidiaries owned by each founder) took on Fantastic Four and Iron Man while Liefeld’s Extreme Studios became responsible for Captain America and the Avengers.

With the deals struck, Marvel’s Heroes Reborn event could commence.

A good start, but not much else.

In 1996, The Fantastic Four and the Avengers fell in an epic battle against the X-Men supervillain powerhouse Onslaught. Instead of simply dying, however, they were teleported to a pocket dimension where their entire life restarted in a modern setting. While the initial sales were good, the Heroes Reborn comics quickly performed even worse than before the reboot. The reasons for this are plentiful.

What is commonly believed is that the initial boost in sales was because readers were simply interested in the concept of the half-reboot, not because of its quality. When that initial wave of interest wore off, readers collectively decided that the reboot wasn’t worth it. And yeah, most of these books are bad. There’s no real way about it. Liefeld’s Captain America run is often pointed to when talking about the event’s many shortcomings. It’s a time capsule of everything ’90s, more for worse than for the better. The comic was all about going in guns blazing, with overly muscular men, sexy women, clunky B-line dialogue etc. Included below is a piece of art of Heroes Reborn Captain America, barrel-chested and all. It really encapsulates a lot of what was wrong with the series.

And that’s just the consumer parts. Back at Marvel HQ, Heroes Reborn soured an already sour and depressing atmosphere. The financial problems, the sudden death of a beloved figure within the company. The decision to not only take these characters and stories away from the people who had worked tirelessly on them but to give them to outsiders was just another drip in the bucket. Many were not happy and when, for instance, Liefeld requested help from writer Mark Waid so their versions of Captain America would be a better match he politely but firmly refused.

After only 6 issues, Liefeld was taken of the Captain America and Avengers comics with the 2nd half of the 12 issues run getting given to others to finish. After this, it didn’t take long for Marvel to plan an end to Heroes Reborn. In 1997, Marvel released Heroes Reborn: The Return. In this limited series, the heroes were brought back from their pocket dimension and returned to their normal status quote.

Heroes Reborn is a very interesting part of Marvel’s history. It’s both a big failure and a big win for the company. That sounds paradoxical, but let me explain. Heroes Reborn is a failure in that all of its titles were poorly received, sold poorly and the entire half-reboot idea did not pan out. It was a success in that after the event was over comic sales actually went up. The event also had a positive effect on the Marvel Universe itself. When Heroes Reborn was going on multiple titles over at Marvel proper explored the in-universe effect of many of these characters missing. It laid the foundation of the importance of the Avengers, as well as gave rise to new IP’s such as the Thunderbolts. Lastly, the Ultimate imprint took many lessons from the failure of Heroes Reborn. You could say that’s a win for Heroes Reborn as well.