About those Xenoblade Chronicles 3 rumours...

Till all are one? 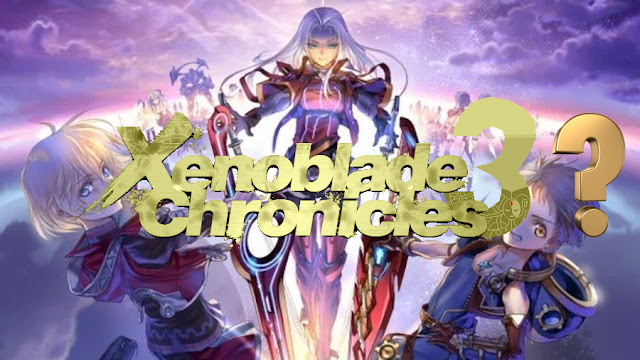 In case you didn't know (which I won't blame you for I haven't talked about it that much) I'm a big Xenoblade fan. Around 2018, looking back at my gaming history, I realized that 1. I had played a disproportionally amount of RGPs and that 2. I really liked (J)RPGs. This realization lead me to seek out more RPGs, eventually getting Xenoblade Chronicles 2 as that year's Christmas gift. While I was taken back a bit by the game's opening sequence, mainly the combat and the story not at all being what I imagined it would be based on what I read, I quickly fell in love with it. The story, the characters and the world especially. I played the game for well over 100 hours, bought the physical edition of its expansion, 'Torna: The Golden Country, and bought the remastered original, 'Xenoblade Chronicles: Definitive edition' day 1 which I eventually reviewed as well.

And now, might I be able to add Xenoblade Chronicles 3 to that collection sometime next year? Around 3 weeks back or so the rumour mill regarding another entry within the Xenoblade Chronicles series sparked to life after a months-old interview started doing the rounds. I've got thoughts about them so without further ado, let's dive into all!

The ball that got the Xenoblade Chronicles 3 speculation train rolling was a June interview between actress Jenna Coleman and small YouTuber Din's Meteorite who managed to snag the interview through an online convention called Galaxy Con. Coleman rose to fame through her portrayal of Clara Oswald in Doctor Who and as Queen Victoria in the series Victoria and is currently a well known and well-respected actress. Before her big break, however, she was just working, starting, actress. In this position, she voiced one of the main characters in Xenoblade Chronicles, Princess Melia Antiqua. A role she, surprisingly but welcoming, revisited for Xenoblade Chronicles Future Connected the brand new expansion/epilogue made for the game's remaster on the Nintendo Switch.

In this interview, Coleman stated “God, when was the first game? Ten years ago? It was a long time ago, I did it pre-Doctor Who days and when they did the second one, they asked me to come back. And I think they’re going to do another,” Coleman paused. “Common knowledge? Don’t know. Yeah, I think they’re going to do another. Not sure if I’m allowed to say that.” It's these few sentences that made people sit up in their seats. Did Coleman just reveal Xenoblade Chronicles 3? Not necessarily. While I'm happy that Coleman reprised her role as Melia in Future Connected, it's some very good sportsmanship, she's not at all 'tuned in' when it comes to the video game industry. She could've easily been mistaken, heard of Xenoblade Chronicles 2 and was unaware the game had already been released or a thousand other things.

The 'leaks' of industry insiders

The interest in Xenoblade Chronicles 3 that this interview brought once the internet discovered it was enough for some industry insiders, like Imra Kahn from FanByte and Samus Hunter (@SamusHunter2) to come out with information they knew about the game or elaborate on what they had said before. According to them, the third Xenoblade Chronicles game in development at Monolith Soft is a sequel to XC2. It was meant to be announced at the beginning of the year and release around this holiday season but the pandemic has caused some development issues and thus delays. The business/work culture and technological infrastructure is different in Japan then here. It's more old fashioned in how it operates. Because of this, the shift to working at home was much more troublesome there then it was here.

XC3 is, allegedly, the ending of the trilogy and takes place in the far-flung future with a few returning characters who have long-outlived their human counterparts from both XC and XC 2. It’s for this reason that Coleman could be aware of XC3. Her character is part of a species that can live up to hundreds of years which means her character could still be alive by the time of this game. The game is also set to be the biggest XC3 yet in terms of performance with more characters and enemies on screen at once while also featuring much more elaborate effects and visuals. Lastly, the game could still be revealed before the year is out but there's no definitive word on that (yet).

So, what do I think of all of this? First off, I don't see any real reason to doubt this information. It comes from some reliable sources and fits with what the series has been doing. The ending of XC2 showed its connection to the world of the original XC while Future Connected, the expansion included in Xenoblade Chronicles: Definitive Edition is literally called 'Future Connected' as well. As I've talked about before, Monolith Soft has also been expanding its business. Been hiring more people. Even if the studio is often called upon to help out other Nintendo developers with their projects, you don't need that many resources if you're not working on something big yourself.

The concepts themselves? I'm mixed on them. XC2 was not a direct sequel. It takes the same basic elements, concepts and core gameplay and puts its own spin on them. The building blocks are the same but Monolith Soft uses them to build something different. Its connection to the original being somewhat of a big reveal at the game's conclusion. After playing both games and their respective expansions I've come to very much enjoy this approach. Each instalment can be its own thing, its own world and story while keeping the spirit of the series and its most defining aspects alive.

And it's exactly such an aspect that would be lost with the 'direct sequel' approach XC3 takes with these rumours.

SPOILERS INBOUND! SKIP THE FOLLOWING PARAGRAPH IF YOU WANT TO REMAIN UNSPOILED FOR THE ENDING OF XC AND XC2!

The most unique aspect of both games are the Titans. The people don't live on continents but on giant creatures known as Titans. In XC, the corpses of the Bionis & Mechonis while in XC2 there are half a dozen still living Titans that the people call home. To me, this is the series most interseting aspect. I mean, where have you ever seen this concept before? On top of that it also leads to a lot of creative freedom and opportunity with its world design as well as create a very unique atmosphere. However at the end of both games this aspect is removed in favour of, well, a normal world. XC: Future Connected did offer a sort off replacement in the form of the floating ex-shoulder of the Bionis and while I find it neat, it doesn't compare to the Titans concept.

So to quickly recap without any spoilers
The way both XC & XC2 ends would mean that the aspect that I feel is it's a most unique asset and my personal favourite would, unless they do some retconning or find something different yet equally appealing, no longer be present. Disappointing.

Except that though, I don´t have too much to say. I would´ve just taken a game that, like XC2, takes the concepts and does its own thing with it but the idea of a game that ties all games in the series together is interesting as well. We get to check in with both worlds and some of their characters as well as those characters interact with each other. Gameplay-wise, I don't know what to expect though I do hope it's a bit more streamlined than it was in XC2. XC2 wasn't bad or anything but it was just a bit too convoluted for my taste.

Oh and one more thing: I don't think that Monolith Softs ambitions in terms of technical performance will guarantee that the game will run poorly. Yes, XC2 optimization was subpar, had some performance issues such as some very ugly pop-in, but that doesn't mean that the more ambitious XC3 will be the same. The longer a console is on the market, the more experience they have developing for a console, the more they learn about the console and the better the games can run. A neat little trick developers learned for the Switch, for example, is that they can temporarily overclock the CPU to speed up load times. Even Nintendo themselves got in on the action after a while with updates for games such as Breath of The Wild utilizing this little trick.

The speculation surrounding Xenoblade Chronicles 3 are very interesting. They come from, generally speaking, reliable sources and fit pretty well with what Monolith Soft has been doing with the series lately. While I´m not that hot on every idea thrown around here I do think it´ll lead to a fun game. If this will all happen is up in the air as the game is still in development and will no doubt undergo changes before their release.

With how the game was, allegedly, meant to release this year and is aiming for a 2022 release, chances are good we don´t have to wait long before we´ll see an announcement. One that can confirm or deny some of this speculation.