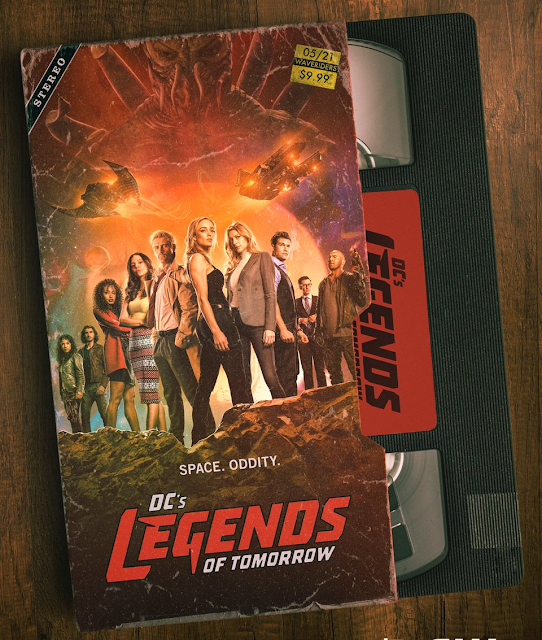 If you know Legends of Tomorrow then you know that it's a weird show. What started as a rather serious show about stopping a dystopian future full of hard and grey moral choices in its first season (my review can be read here) loosened up considerably by its second season (again, my review can be read here) only to become a full-fledged comedy in its third. Now, a few seasons later the show has fallen into a comfortable groove of absurdity, zany hijinks and rich character work. But has it, perhaps, become too comfortable in its groove? That's the question I found myself asking watching the show this season as, while Legends is still a good show, it felt it was going through its own established motions a lot this season. That for much of it, the series was on autopilot for better and for worse.
Let's dive in.

After defeating the Weavers of Fate and wishing farewell to Charlie aliens kidnap Sara, captain of the Waverider. To complicate matters, while Sara manages to initially escape her alien abductors, she is stranded on a dangerous planet ruled by an evil genius by the name of Bishop while the aliens that were also on the ship scatter all across history. This leaves the Legends, co-captain and clone Ava dark magician, John Constantine; a semi-reformed arsonist, Mick Rory; historian who transforms into steel, Nate Heywood; and a brother-sister wind-totem-wielding duo, Zari Tarazi and Behrad Tarazi to save the world for the sixth time. This time, from a horde of evil aliens and one particularly nasty evil genius.


Ever since its second season Legends has changed itself up every season. Each new outing has the team face another threat all throughout history with a slightly different team each time. From people popping up in different points in history, like Julius Caesar in modern-day Aruba, to magical creatures doing the same, like a Unicorn eating the hearts of Hippies at Woodstock. This has always been a double-edged sword for the show. That each season has a different central theme keeps the show fresh and means that elements that don't work out can be cycled out next season. On the flip-side but the shows ever changing aspect, especially the rotating cast, has received criticism.

I, for example, didn't enjoy season 4 very much. It started strong but the Neron stuff just didn't do it for me. I didn't find it as compelling as the Legion of Doom or Damien Dahrk and found a new addition Mona Wu and the big focus on the Time Bureau grading. Because of this lack of engagement, I found it much easier to see cracks. I'm very much in the same boat with this season. I found the main narrative, the Alien threat, to be lacking. . As a comic fan the prospect of seeing the team deal with 'famous' comic aliens was appealing but no, it's all made up stuff. This added to the lack of engagement and the sense of familiarity of this season.

The COVID pandemic will have probably had some impact in regards to this. The restrictions in place kept the show from going all out, kept them from bringing in big guest stars, and thus had to reel it in. Rely more on and the tried and true and I think that's where the going through its own motions comes from. That and the show could be dealing with the same decline in writing that many of the CW shows suffer from like its cousin The Flash. That's also likely and worrisome but we'll have to wait and see for next season if that's the case.

In terms of characters, season 6 did a fine job. Strong characterization, character growth and interactions have been a staple of the series and is what keeps the show grounded amongst the weird. The show once again puts these loveable outcasts in the forefront. Sara faces a crisis of identity, Ava has to try to keep the Legends up and running while John Constantine is making the most of life now that he has ownership of his soul back etc. It's good stuff again though I do question the creative decisions made with some of them. The big 'twist' in Sara's story I find especially questionable.

Some issues are crawling up which I think is due to the number of original team members and characters taken from the page have dwindled alongside the cast getting a bit too big. The only clear comic characters on the show this season were Nate/Citizen Steel, Mick Rory/Heatwave and John Constantine and, spoiler alert, two out of three leaves at the end of the season as is Legends tradition. I felt that Mick's ending was only 'meh' but I have to say, John leaves in a fashion that fits the character perfectly. He has to walk his path alone, after all.

There are also just a bit too many characters leading to 'fights' over screen time. Behrad, for example, had a lot of potential as a character (like I discussed before) but season 6 has him mostly just be a stoner. He doesn't have any big moments and his interaction with his sister, them diving into their sibling bond, is limited. Nate barely gets any real development this season and while the idea of having the OG Zari back for an episode or two is more in service of other characters than the two Zari's themselves. Luckily, newcomer Spooner gets enough time to shine to establish herself as an interesting member of the team. I hope she sticks around next season.

When it comes to the other aspects of the show nothing has changed much really. The production values are still solid, especially for a CW show (that doesn't have extra HBO Max funding). The CGI is passable (whenever they do decide to use it, looking at Nate's steel powers!) while the sets and costumes are really well done. Production-wise the season is up to snuff. Oh, and there's also an episode that has an animated segment which is well animated and works out surprisingly well within the context of the episode. Neat.

Legends of Tomorrow Season 6 isn't the greatest season but it's still a good and enjoyable one. The main story about aliens didn´t grab me personally, I felt the show went through the motions a lot this season which might be a combination of the Covid constraints and it being a long-running show. Even with my grievances, the series is still good and very enjoyable. Worth your time if you´re a Legends of Tomorrow fan though I don´t see you rewatching this season a lot.

Even if season 6 wasn´t as great as I´d like I´m not assuming season 7 will continue this downward trend. Just like season 6, I didn't enjoy season 4 but by the following season, however, I have hooked again due to the show´s ever-changing nature. I hope season 7 will do the same when it rolls around later this year.