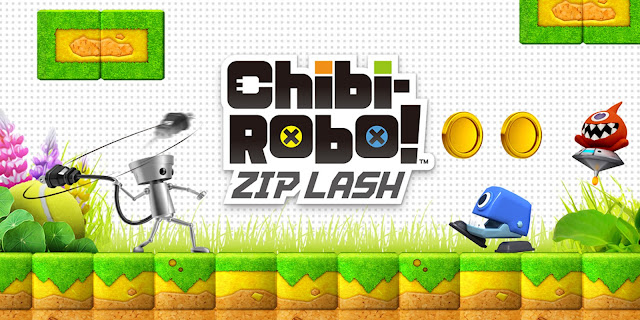 Are you familiar with the temptation of the red button? You know you shouldn't push it but you want to do it anyway? Well, Chibi-Robo! Zip Lash is a red button for me. I first learned of the game, and Cibi-Robo, through Scott the Woz. He's a big fan of Chibi-Robo, putting references of the games in multiple videos and having a running gag with Zip Lash (if you're familiar with Scott the Woz, you know the one). After making a dedicated video on the game in which he rips it to shreds basically, my interest was piqued. I managed to secure a new old stock copy at only 5 moolah, a price at which I was very comfortable to satisfy my curiosity.

Now that I've played and finished the game, I don't think the game is as bad as Scott feels it is but it's no doubt one that's way below par and not something that'll keep entertained for long.

The story of Chibi-Robo! Zip Lash is simple. While on break from cleaning the outer hill of a space station, Chibi-Robo and his friend/assistant Telly see on the news that aliens are causing trouble on Earth. They're stealing the planets natural resources, disturbing Earth's natural balance. With their own spaceship, the Chibi House, the two go to Earth to stop the aliens. Along the way, the two travel across 6 different regions of the planet taking out the aliens' robots and helping out fellow sentient toys.

The story is nothing special, just like it isn't for practically all Nintendo published platformers. It's not really why people play these types of games but I will give Chibi-Robo! Zip Lash this: the story, the game itself, has a lot of charm to it. From Chibi-Robo himself to the general tone, art style and sound design. It's all pretty delightful and I can understand why people who played earlier Chibi-Robo games have become so fond of it. It kept me engaged for much longer than I would've been considering the rest of the game is rather boring and dull.

The gameplay of Chibi-Robo! Zip Lash is subpar. You just run, jump, use your electrical plug and cord as a whip and as a tool to get yourself to higher ground. That's the most unique aspect of the game. The electrical Zip Lash cord. Pressing the Y button shoots it out right in front of you, which is your basic attack while holding the X button charges up your shot for a longer reach and allows you to control the angle of your shot. It is pretty fun to use and does lead to some interesting platforming challenges. This distinction between the Wip and Zip Lash moves feels unnecessary. Merging the two techniques together under one button (and reduce the windup time) would have been beneficial to the gameplay flow.

In each stage, your health bar and timer are integrated into one bar: Chibi-Robo's battery. It constantly drains with a hit by an enemy taking out a big chunk of it. You can replenish it by plugging yourself in an outlet which transfers energy of your ship, itself powered by burning trash. If fall in pit or something your energy is drained and your returned to the last checkpoint. Run out, it's a game-over for you. The collectables of this game are plentiful. The trash, three special coins, even smaller Chibi-Robots that you need to catch and aliens to bring back to their spaceships. There is more for you to do in these stages then just getting to the goal, should you so desire. If you'd want to though is a different story as this game is rather dull and mind numbing.

A big factor in the, sometimes overwhelming, sense dullness of the game is just how slow it is. From the walking speed to the attacks to, well, basically everything. It's all just a notch or two slower than it really should've been. It doesn't make the game any more exciting, I'll tell you. It pretty much makes the game a slog to get through because it just won't get going. Because you just want to move on but the game doesn't really let you do that yet.

The bland design also doesn't help matters. The levels, the stages, aren't actually bad. They're not overly frustrating or designed in a way that can make you end up getting stuck. However, they are far from creative. Chibi-Robo! Zip Lash is one of those games in which, once you've played one level, you've basically played them all. The core design doesn't change, doesn't mix things, introduce a gimmick or such. There is one level in which the game requires you to take different pathways to open up the route to the end but that's really the only level that mixes things up. Even the concept of traversing the world doesn't really account to much as none of the levels actually feel like you are in Europe for example. It's just a generic forest level.

Well, aside from the vehicle stages. Once each level you're hit with a vehicle stage. From a balloon ride to a submarine. While these stages can be fun what really hinders them are the controls. The balloons, for example, go down instead of up when you swing Chibi Robo around from left to right. It's... something else all right. These weird control schemes might be less of an issue if these levels themselves weren't so unforgiving. Unlike the normal stages, if you're hit once, it's a game over. Yet another one of this game's tactics is to make the game last longer by making a questionable design decision. Have to admit though, the final boss can be considered a vehicle stage also but that one is actually pretty nifty!

And what is up with the destination wheel?! Instead of going through each level's 6 stages in order, at the end of each level, you spin the destination wheel. The wheel has different slots that determine how many stages you move forward. 1, 2 or 3. I don't understand the reasoning behind this decision other than making the game longer as it's an exercise in frustration. You sometimes have to replay 2 levels just to get another chance at spinning the wheel again and actually get to the level you want to be to progress the game. There are ways to maximize your chances, hitting a silver or gold UFO at the end of each stage gives you more spins and you can buy panels in the shop with collected coins to maximize your chances. Still, the destination wheel wasn't a good idea and hindrance to the game.

Chibi-Robo! Zip Lash isn't a very good game. It's not an outrageously bad game or anything, it's playable, just not very enjoyable. It has some good atmosphere, it has charm, but the game is weighed down by just how and dull and bland its game design is. if you've played one level, you've played them all. Couple that with some very frustrating and questionable design decisions like the destination wheel and you have a game that's not worth playing in my book. Play it if you really want to, if you're curious, if you can get on the cheap but that's really the only type of recommendation I can give it. Even then, I doubt that this game will keep you engaged for long.