Review: Shang-Chi and the Legend of the Ten Rings

Shang-Chi and the Legend of a broken family. 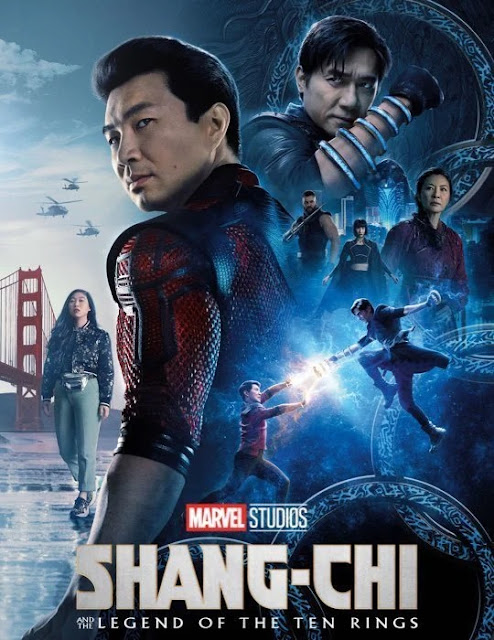 With Black Widow performing well enough and the movie box office starting a climb the Marvel machine is back rolling with its 2nd phase 4 film. Shang-Chi and the Legends of the Ten Rings. A movie that many like to describe as an 'experiment' because it's the first Disney movie in a while that's a theatre exclusive. A poor word to describe the movie considering it is similar to Black Panther in that there´s a lot of, in this case, Asian people and culture mixed into the film both in front and behind the camera. Because really, this movie is a great movie not because of this cultural aspect but it's great because it's just very well made. It's a well written, well-acted movie with some impressive martial arts action sequences and lots of spectacle that stands on its own two feet without any issue.


Around a thousand years ago in China, Xu Wenwu discovers the Ten Rings mystical weapons that grant their wielder immense power and immortality. For centuries, Wenwu uses the rings and the organization he founded named after them to give himself might and wealth. That is until in 1996 he falls in love with a woman while searching for the mythical village Ta Lo and starts a family.

In the present day Wenwu's son Shang-Chi, under the name Shaun, works as a valet with his best friend Katy in San Francisco. His life has been normal ever since leaving his father behind a decade ago though struggles with finding a purpose for himself. Struggles with finding something to do with his life. While commuting to work one morning, Shaun and Katy are attacked by members of the Ten Rings. While Shaun manages to fight them off they get away with his pendant setting Shang-Chi and Katy on a journey across half the world to find out what Wenwu wants with the pendant and, eventually, save the world.

First things first. This movie is so very enjoyable in large parts because of its story. Shang-Chi follows a trend of the MCU that Captain America the Winter Soldier started and has recently been picked up again. That these movies, while different in the Superhero genre, are that second and something else first. Winter Soldier was a spy-thriller first, superhero flick second and Shang-Chi is an adventure, find yourself, flick first and superhero film second. Because of this, and the just well-rounded script, it's the one MCU movie in a long time that can stand on its own two feet perfectly fine. Is an engaging and enjoyable watch throughout for everyone and without relying (too much) on the MCU or hindered by its place within it.

I do have one big gripe with the story and that is the, let's call it world shift, mid-way through the film. The first half is very grounded while the second half does a deep-dive into the magical. It's not a bad part of the movie, it has its own charms, but it is a noticeable shift. One that I feel the film didn't need as the movie was perfectly fine without but that's more a personal taste.

The characters are also an enjoyable part of this movie and are very well written. It's not one of those movies in which the story, the spectacle, is more important than the characters, not at all. It even goes as far as to break with conventions (or at least expectations) by having the female lead, Awkwafina's Katy, not be the female love interest for Shang-Chi to pine over but be an active player throughout the entirety of the movie. Shang-Chi is one of the few Marvel movies with a 'good', unique, villain as well. Wenwu might have started out as a warlord but the movie does a lot, and succeeds, making him very human with a personal and relatable reason that makes you actually kind of root for the guy. The only character that I have some issues with is, ironically, Shang-Chi himself. His characterization is on the weak side. Doesn't have any clear characteristics to him though that isn't to say he's a badly written character.

The performance of the cast is another strong point. The entire cast put in good performances. The characterization of Shang-Chi is a bit weak as I've stated but that doesn't really matter because of Simu Liu's likeable performance as the dude. Awkwafina walks that fine line between the endearing comic relief and not being annoying while Tony Leung steals the screen when he's on it. A lot of what makes Wenwu work as a villain is Leung's performance. His ability to play to convey the pain he has with just his facial work alone was wonderful. That he goes all out in the action sequences, clearly doing at least some of his own stunts as well.

On that note: the stunt work and martial arts are exceptional. It's very much in line with that of a very good Kung Fu movie like Jackie Chan used to make. And there is quite a lot of it. From the opening sequence to that bus fight from the trailers, the top of the action this movie brings is my book. It's well-choreographed and well-executed by the stunt team and the actors. Those of you who wanted to see this type of fight sequence in Black Widow and were disappointed there (I can understand) you can get your fix here. The final battle is, just like everything in the movie, is well done through a stepdown compared to the rest of the action of the movie. It's a bit too reliant on CGI and perhaps a bit too self-indulgent. If it wasn't for these visuals and a pivotal moment between father and son I wouldn't really have made an impact on me beyond 'it’s the finale showdown'.

This also leads us nicely into the next aspect of the film. The GCI. Like many superhero movies (and just cinema, in general, these days) is a big and pivotal aspect of the movie. More than you'd think even with, thanks to behind the scene photos, showing us that they used it to recreate most of the hotel and street Shang-Chi and Katy valet at. While I do think the film relies on it too much, it has to do with how deep it eventually dives into the mystical, that's not a gripe against the quality of the CGI. Said quality is high with no noticeable drips in quality. No 'laugh out loud' poorly generated special effects.

Lastly, there is the soundtrack. It reminded me a lot, in a positive way, of the soundtrack of the Kung Fu Panda movies. Makes sense. Both are movies that have a big focus on Chinese culture and thus have their soundtrack made in Chinese style. With Chinese sounds, instruments and compositions though still very Hollywood-esque. It's good stuff, both calming and exciting and worth having on iTunes and such.

Shang-Chi and the Legend of the Ten Rings is a very good film. It's well written, well-acted and has some very cool and well-executed martial arts fight sequences. Above all else, just so very enjoyable. A movie that works, that can be enjoyed, beyond its connection to the MCU and the superhero genre. I do think Shang-Chi himself could use some more characterization and I think the movie switching over to the heavy magic stuff halfway through the movie, while a visual spectacle, was unnecessary. Even so, this movie is still very good and a lot of fun. Go see it, you won't be disappointed.