The Switch is in the 2nd half of its life so how could its inevitable successor look like? 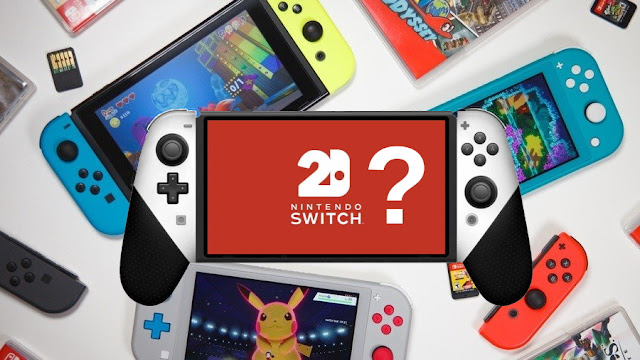 As per Nintendo's own word the Nintendo Switch, the home console/handheld hybrid system that launched back in 2017 and has been selling like hotcakes ever since, is now in the 2nd half of its lifespan. This means that roughly speaking, Nintendo expects to launch whatever ends up being its successor somewhere around 2024/2025. That's still a long way off but I can't help but wonder about the console. Especially now that the set of next-gen consoles, the PS5 and the Xbox Series X/S are nearing their 1st anniversary. I've got a few ideas about what direction the 'Switch 2' could go.

And yes, I do assume we will see another Switch. Consolidating their home console and handheld businesses has done well for the company. I mean, just look at its sales. It's almost a certainty by now that it will outsell the Nintendo Wii. Keeping this momentum going would be in their best interest.

Without further ado, let's dive in!

Let's start with getting the basics of any new console out of the way. They are almost always more powerful than their predecessor. I say 'almost' because the Nintendo Switch itself isn't any stronger on the hood than the Wii U in any significant way. Because of its dual nature, Nintendo spent most of its R&D on getting the technology inside the Switch and make it all work practically and seamlessly.

he gap in power between Nintendo and its competition has become rather big nowadays. Games such as The Witcher 3: Wild Hunt (which I reviewed) and Doom Eternal can run on the Switch but are compromised to do so. I don't see any games from this current generation make their way over to the hardware. Nintendo itself has always been very good in bringing out the best with what they have to work with but there's still just so much you can do with the current hardware. Plus, with the Steam Deck coming out, the Switch will face even more competition as I've discussed in lenght before. I think that, in terms of power, the 'Switch 2' being around the same level as the PlayStation 4 Pro and Xbox One X would be reasonable.

4K with the DLSS chip?

Another aspect that gamers have been wanting out of the Switch is 4K compatibility. It's something that I discussed earlier including my reservations in regards to it. By 2024/2025 however 4K TV's and monitors will (I assume based on trends and such) be much more affordable and more widespread. With the competition also targeting 4K (even the Steam Deck) it's practically becoming standard.

A great option for Nintendo to bring 4K like visuals to the Switch is Nvidia's, Nintendo's current chip supplier DLSS chip. This DLSS, which stands for 'Deep-Learning Super-Sampling', combines 'traditional' temporal super-sampling with a neural network to radically boost resolution. It turns and videos from 720p and 1080p resolution to something resembling a 4K resolution. The upside of this, compared to how to say Xbox achieves 4K, is that Nintendo and its developers don't necessarily have to develop their games for 4K. Nintendo can bring it to older games like The Legend of Zelda: Breath of the Wild, Super Mario Odyssey and even 3rd party titles such as The Witcher 3: Wild Hunt. After all, the 4K like the resolution is achieved through post-processing.

The use of this DLSS has been heavily rumoured, speculated and predicted but is viable? Digital Foundry, a gaming tech-based YouTube channel associated with Eurogamer, did tests with the DLSS chip to find out just that. To see if 1. would it even be a viable option for the Switch and 2. how would the quality be? If this subject interests you, I highly recommend reading and/or watch their full article and/or video but in short: the answer to both questions is a yes. There are, of course, caveats and drawbacks when it comes to using the DLSS in the Nintendo Switch. It increases the rendering time and the power consumption for one and the visuals aren't as good as 4K but the resolution is still acceptable. Nvidia and Nintendo can, and no doubt will tailor the DLSS and the 'Switch 2' hardware to get the best results possible if they decide to use it.

That the 'Switch 2' would be more powerful is logical and that it would be compatible with 4K in some way, shape or form are two rather obvious things. Something that anyone can add to the conversation. That's where this little idea of mine comes in. I've been thinking about a way Nintendo could take the next step with the 'Switch 2' with its concepts. Where my mind went to is a dock with a wireless option. The ability to not just physically dock the 'Switch 2' but can connect to the TV using a wireless connection. This would essentially create the tablet setup of the Wii U but in the way people wanted it to work.

The Wii U was a failure, so why would Nintendo bring back the big gimmick of that console? I say it's about the execution of the concept, not the concept itself. With the Wii U, the tablet was very limited in what it could do. You could use it to play the games just on the tablet but only when in range of the main console. The tablet very much felt like an afterthought in many games. Something implemented by the developers simply because they had to use it in some form.

With the 'Switch 2' it would just be an option. It's just an extra functionality that's there for games to make use of if they so desire. No more forced integration. Just something to enhance the 'Switch 2' like, for example, allowing multiplayer in games such as Mario Kart without split-screen. One person plays on the TV, the other on the Switch itself. It will allow for one more implementation that I'll get into later. Plus: it's something that Nintendo can point towards and go 'see, this is how the 'Switch 2' is different from the original Switch. Something that general consumers can easily see as a difference and improvement.

What I'm more speculative, more daring, on is the backwards compatibility when it comes to Nintendo's legacy content. That last implementation of the Wii U like tablet mode of the Switch 2 a wireless TV connection would bring? Playing Nintendo (3)DS on your 'Switch 2; just like the Wii U could. I can see them continuing with the 'Nintendo Switch Online' thing with the 'Switch 2'. That or, perhaps, they will expand their service into something bigger and more like game pass like as is currently circling around and talked about myself. Either way, they have the option to add DS and 3DS games to their lineup this way.

I could go on longer with features I’d like to see the successor to the Switch, in my case the ‘Switch 2’, tackle but this article is already plenty long enough so I won't. The things I really wanted to talk about, the 4K, wireless docking and backwards compatibility I have talked about. Stuff like new controllers can be easily summed up here as ‘they won’t drift’. Do you agree with my vision? What would you like to see from Nintendo’s next big console? I’d very much like to know!