Let's Talk About everything from National Pokémon Day 2021 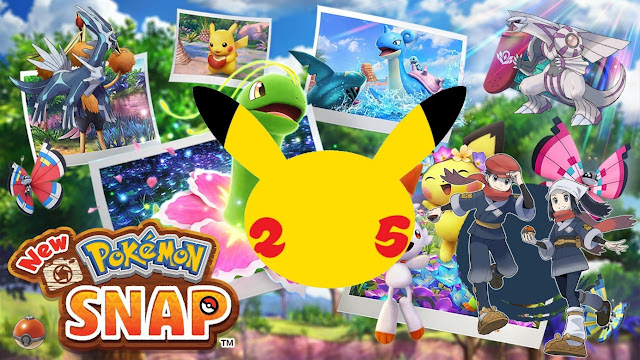 The fifth annual celebration of the Pokémon franchise has now come and gone. Unlike previous years, National Pokémon Day 2021 wasn’t as much of a day as it was a week. Perhaps it was done because this year marks the 25th anniversary of the franchise. Perhaps it was done because of the current pandemic. Who knows. In any event, this year saw announcements spread out over the entire week leading up to the day itself. With the week now well and over, let’s take a look at all of the announcements, what my thoughts are on them as well as discuss the possibility of more Pokémon goodness later in the year.
Let’s dive in.

That there would be Pokémon announcements throughout the week didn’t mean that there was one every single day. The first announcement that could be considered part of Pokémon’s 25th came on Wednesday with new Pokémon Masters EX content. There was some Pokémon GO stuff on Monday, but that wasn’t anything special. Nothing out of the ordinary. With Pokémon Masters EX, on the other hand, it’s clear that it meant to celebrate Pokémon 25th. Officially, the say that all of the new stuff is because of the games 1.5 Year Celebration. To that I say: yeah, right. Who celebrates their 1 and half year existence?

So, what is the new stuff coming to Pokémon Masters EX? Well, it’s quite a lot. For starters, two brand new Sync Pairs have been added to the game. Leon & Charizard and Marnie & Morpeko alongside appropriate story events. Another story event, focusing on Iris as a Champion, will also be released. Some older characters, such as Gloria, Iris and Diantha, will also return to the game alongside various user updates.
I’m not a Pokémon Master EX player, but I think that the above is something that players will be excited about.

More Pokémon 25th goodness came the following day in the form of music. The Pokémon Company had earlier announced that it had entered a partnership with multiple singers to produce music for the anniversary. Before the digital Post Malone concert in February, a collection of songs was released on places like YouTube, Apple Music, Spotify and any music streaming service that you can think of. These songs are … fine if you ask me. I’m no fan of most of these artists, to begin with, and I’m not that impressed with these new arrangements even with the added Pokémon flair.

A day later there was quite a surprise. The announcement that a Pokémon Present would air the following day. That there would be a Pokémon presentation was not a surprise, but that it would be on Friday was. The Presents rolled around the next day and oh boy, was it a doozy! It was such a doozy in fact that I ended up writing two separate articles about it already to which I’ll link when it’s appropriate. Let’s go over everything in the present one by one. ‘

The presentation started off with a very neat video recapping nearly every Pokémon product that has come out. From Red & Green in Japan to the Sword & Shield Expansion Pass. From the anime to the TCG. From the E-reader to the microphone accessory of Hey You, Pikachu!. If you’ve been a Pokémon fan that video will a trip down memory lane for you. I very much enjoyed it. It’s well-edited, fast-paced and has a catchy tune under it. My one problem with it is that it's rather long. I mean, I get it. Pokémon has been around for 25 years now so there’s a lot to talk about. But the only thing I and many watchers were thinking was: ‘this is great, but can it end now? We want to get to the announcements!’. So yeah. It was fun, but it a bit long.

With the introduction out of the way, it was time for the first announcement. As I suspected, the Pokémon Company started with another look at New Pokémon Snap. It’s due to release next month after all. New Pokémon Snap isn’t a game I have any real interest in, I never understood the appeal of Pokémon Snap, but I’m going to try my best and cover it here nonetheless. Just excuse me if I miss some things here and there. We got some more details on the story of the game: to observe and research Pokémon in their natural habitats. We’re formally introduced you to Professor Mirror as well as your two teammates: Rita and Phill. You know, with how weird Pokémon can get with the names of its characters (Cheren, Ghetsis etc.) ‘Rita’ and ‘Phil’ are two very tame names. It kind of sticks out if I’m being honest!

Anywho, we also got more details on how your photographs are measured. Just as in Pokémon Snap, the rating of your photo’s is determined by a variety of factors such as its framing, how rare the action is of the Pokémon etc. The latter is especially important, is it’s a major factor in how many stars your photo gets. How do you capture a Pokémon’s rare moment? By throwing some fruit it's way, playing a tune or a ‘Luminous Orb’ which will make Pokémon glow. The latter seems to be the replacement of the originals ‘Pester Balls’. Because throwing a rock at a Pokémon to annoy them isn’t something GameFreak wants to associate with anymore. You can also edit your photo’s with frames and special effects and, of course, share them online. Oh, and Celebi is in the game. I really felt like mentioning that.

After New Pokémon Snap, it was time for the main event for many. It’s also the part that those two other articles come in. As many had hoped, Diamond & Pearl remakes were confirmed. They are Brilliant Diamond & Shining Pearl and will launch later this year. I gave my full thoughts on the Sinnoh remakes in ‘Let’s Talk About Pokémon Brilliant Diamond & Shining Pearl’, so if you want to know my full thoughts on them I encourage you to read that article. What you need to know about these games is that they’re, and I quote the official announcement here, “has been faithfully reproduced”. The game is outsourced to another company, ILCA, and uses Chibi style graphics for the overworld. The graphics and the uncertainty of any improvements and additions to the game have received criticism from fans but overall, people are looking forward to it.

The other announcement was a surprise to virtually everyone watching. You remember people, after Sword & Shield turned out to be a disappointment for many, asking GameFreak to make a game that’s more like the Legend of Zelda: Breath of the Wild? Well, turns out they listened! Pokémon Legends: Arceus is the first-ever truly open-world Pokémon game. Looking at the footage of the early build of the game, it truly does look like Breath of the Wild, but with Pokémon. It’s set in Feudal Sinnoh when the region had not yet been full colonized. It’s your goal to explore Sinnoh, complete the Pokédex while also dealing with the Mythical Pokémon Arceus in some way. People are looking forward to Brilliant Diamond & Shining Pearl but can’t wait for Legends: Arceus. If you want to read more about it then I will, once again, refer you to the article I wrote on it. Check out 'Let’s Talk About Pokémon Legends: Arceus' for more info as well as my thoughts on the game.

One thing that I didn’t mention in either of the two articles is what these two games mean for the whole Dexit situation. First off, from what it looks like right now, none of these games will future the National Pokédex. In Pokémon Legends: Arceus its quite clear that not all Pokémon will be in there due to story reasons. In Brilliant Diamond & Shining Pearl, the Chibi style combined with the outsourcing and the ‘faithful’ in the marketing heavily implies that there won’t be a National Pokédex in the game as well. It’s quite a bummer, really. I had hoped that whatever the other Gen 8 mainline game would be, it would bring the missing Pokémon back. With the Sword & Shield Expansion Pass introducing the concept of patching in Pokémon, I was hoping that these Pokémon would become compatible with Sword & Shield as well. A shame that this isn’t about to happen.

Lastly, there was National Pokémon Day 2021 itself. February 27th, 2021. The day that, 25 years ago, a small and severely under-staffed game company launched their passion project. Pocket Monsters: Red & Pocket Monsters: Green. The day itself was what as advertised. The lack of any real-world event lessened its impact if you ask me. Twitter and Social Media were abuzz the entire day with Pokémon by both official outlets and the fans. It was quite fun. The day ended (in my time-zone at least) with the virtual Post Malone concert. It was OK. I’m not familiar with Post Malone nor can I say that I enjoyed the music, but the animation of the backgrounds was nice.

And with that anti-climax, National Pokémon Day and this post came to an end. Overall, I enjoyed it. I thought that the build-up throughout the week wasn’t much like I expected and that the day itself was lacking but at least we got a very good Pokémon Presents out of it. I mean, I did write two posts on the stuff in that presentation alone. Plus: I’m pretty sure that this isn’t the end of it. We will see more information revealed about Brilliant Diamond, Shining Pearl and Legends: Arceus no doubt. Perhaps we will even get another surprise later in the year? I’m certainly hoping for it!